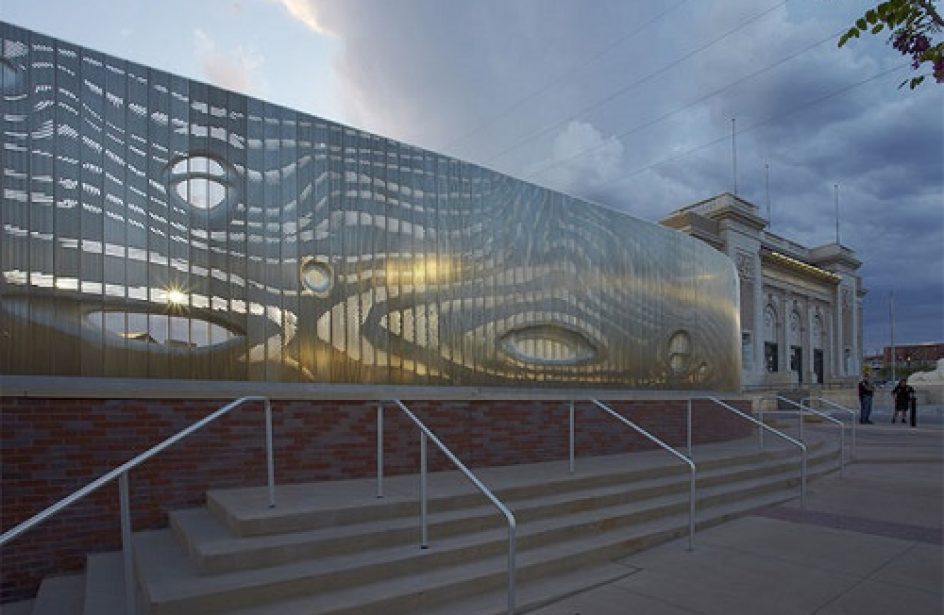 El Paso, Texas’ Southwest University Park recently debuted a new all-aluminium façade reminiscent of wooden slats of the days of yore. Ball-Nogues Studio’s “Not Whole Fence” surrounds the play of the San Diego Padres’ Triple-A affiliate El Paso Chihuahuas, which is an installation of public art that went from drawing board to reality in under a year.

The piece is comprised of 200 CNC-milled custom extrusions with conveniently placed “knotholes” whereby passing pedestrians may spy upon the goings-on of the ball diamond. “The structural quality of the fence creates a sense of mystery,” explained Ball-Nogues Studio’s principal Benjamin Ball. “By allowing mostly partial views of the action inside the ballpark, it calls for the imagination to conjure up the rest of the picture, creating a sense of fantasy and infinite possibilities.”

Ball explains that the architect intended to evoke the history of America’s Pastime with this piece. “There’s a mythical history to baseball about kids using knotholes in the fence to sneak views into the game if they didn’t have tickets.”

The firm teamed up with Sapa Extrusions to make custom dyes for two hundred unique slats that were bolted together at the site. The designers also created a wood-grain look by milling out portions of the slats in appropriate places.

“You can’t blow anything up to a colossal scale without thinking about Claus Oldenberg,” explained Ball. “We’ve never used that as a strategy before in our work. This still has to function as a fence, and we still value things like detailing, tectonics, connections. In contrast to Oldenberg’s work, we occupy an ‘unusual gray zone” between architecture and public art.’

Ball says his firm is less interested in the kind of building to be built than it is in creating appealing structures. “We’re looking for the right challenges, and the right people to work with. Are they willing to take chances? Do they believe in our process? That could apply to buildings or public art.”