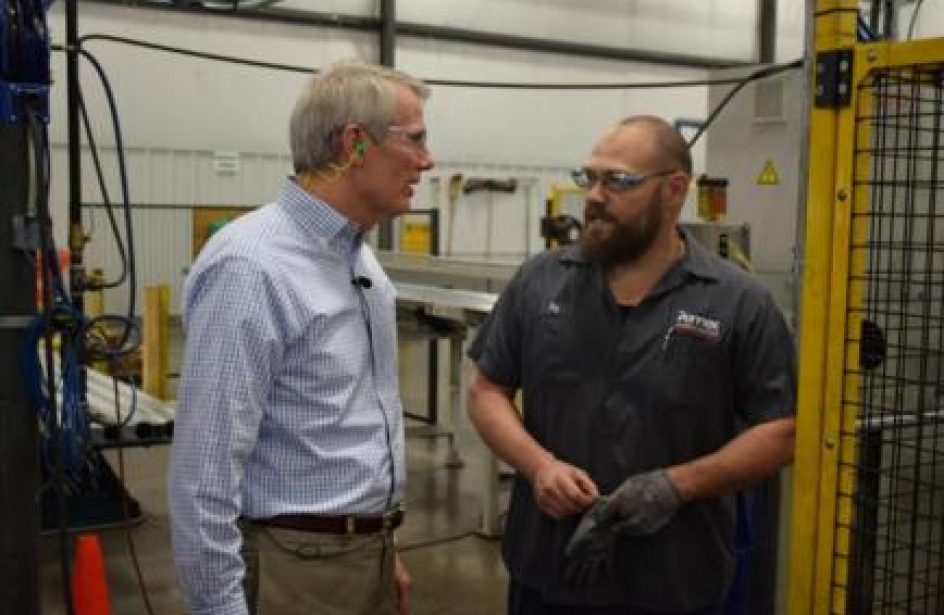 Junior United States Senator Rob Portman (R-OH) toured the campus of Pennex Aluminum Company in Leetonia, Ohio on Friday. The Senator met with company leadership, toured the facilities, and participated in a town hall on the subject of aluminium manufacturing and the struggle many domestic manufacturers have had in recent months to remain competitive in the face of difficult global market conditions.

“It was a privilege for me to have a town hall meeting with these Ohio workers today about the issues they are concerned about, like jobs, the rising cost of living and the threat of unfair imports,” said Portman.

“Unfortunately, aluminum manufacturers like Pennex have been hit from all sides by dishonest trade practices like illegal dumping by China. Ohio workers like these are the reason why I authored the Leveling the Playing Field Act, helped pass the ENFORCE Act, and have advocated for Ohioans in dozens of trade cases. I’m going to keep advocating for these highly skilled workers and I’m going to keep working to ensure that they have the level playing field they deserve.”

Pennex has been prospering in a difficult market. The company opened a US$38 million expansion at the Leetonia plant two years ago, and has been adding to its workforce in the intervening months.

“This plant is one of the best in the country. You’re creating a lot of jobs here. My job is to help you continue to do that,” said Portman.

President and CEOO of the Metal Exchange Corporation (parent company to Pennex Aluminum) Rick Merluzzi spoke as well, detailing the difficulties the company faced after a tidal wave of aluminium from China washed over the industry in 2009. An anti-dumping action subsequently filed in court led to an order limiting the influx, helping to ease the pressure upon Pennex.