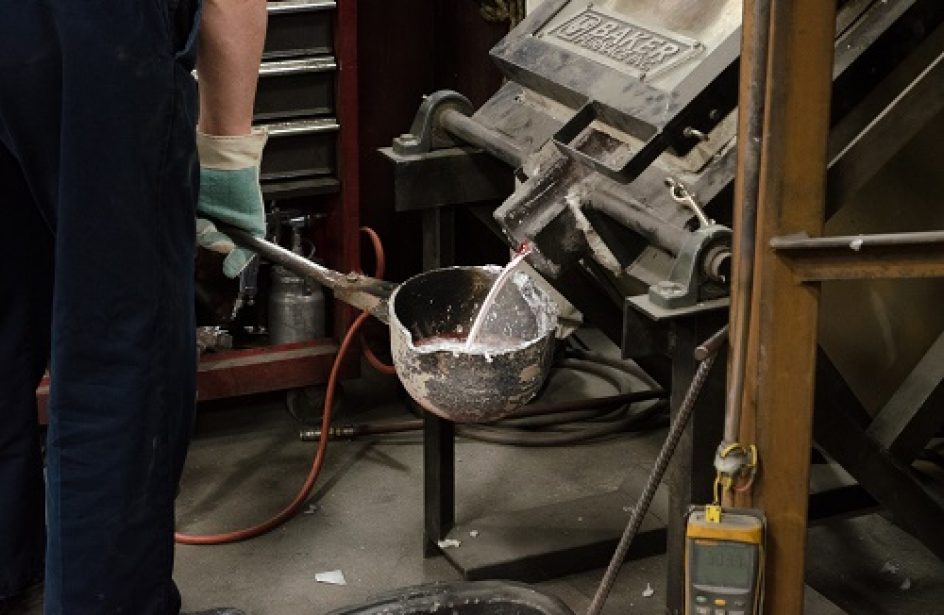 Alloyed metals being poured from a furnace into a ladle, to be used to fill molds. Image credit: Zachary Sims, ORNL

Scientists at the United States Department of Energy’s Oak Ridge National Laboratory, the Lawrence Livermore National Laboratory, and Eck Industries announced last week that they have developed a new variety of aluminium alloys that are more resistant to heat and are easier to work with than current alloys. Such alloys have the potential to re-invigorate America’s production of rare-earth elements, which are key to electronics and other modern and emerging technologies.

“We have these rare earths that we need for energy technologies,” said ORNL’s Orlando Rios, “but when you go to extract rare earths, the majority [of rare earths found in the United States] is cerium and lanthanum, which have limited large-volume uses.”

To address this problem, the research team has developed an aluminium-cerium alloy with a view to using it in applications in industries like automobile manufacturing.

“The aluminum industry is huge,” Rios explained. “A lot of aluminum is used in the auto industry, so even a very small implementation into that market would use an enormous amount of cerium.”

He went on to explain that such an alloy is potentially beneficial for the auto industry as its advantages include low cost, high castability, reduced heat-treatment requirements, and exceptional high-temperature stability.

“Most alloys with exceptional properties are more difficult to cast,” said David Weiss, vice president for engineering and research and development at Eck Industries, “but the aluminum-cerium system has equivalent casting characteristics to the aluminum-silicon alloys.”

What makes the alloys perform so well at high temperatures is a specific aluminium-cerium alloy, otherwise known as an intermetallic, that forms as the alloy is cast. This intermetallic remains stable up to 2,000° F. This makes the alloys ideal for use in internal-combustion engines, as models built from this alloy can run hotter and be made lighter, both of which improves fuel efficiency. The team has already demonstrated both of these notions to be true when it recently assembled a 3-D printed prototype.

“Three-dimensional printed molds are typically very hard to fill,” said Zachary Sims of ORNL, “but aluminum–cerium alloys can completely fill the mold thanks to their exceptional castability.”