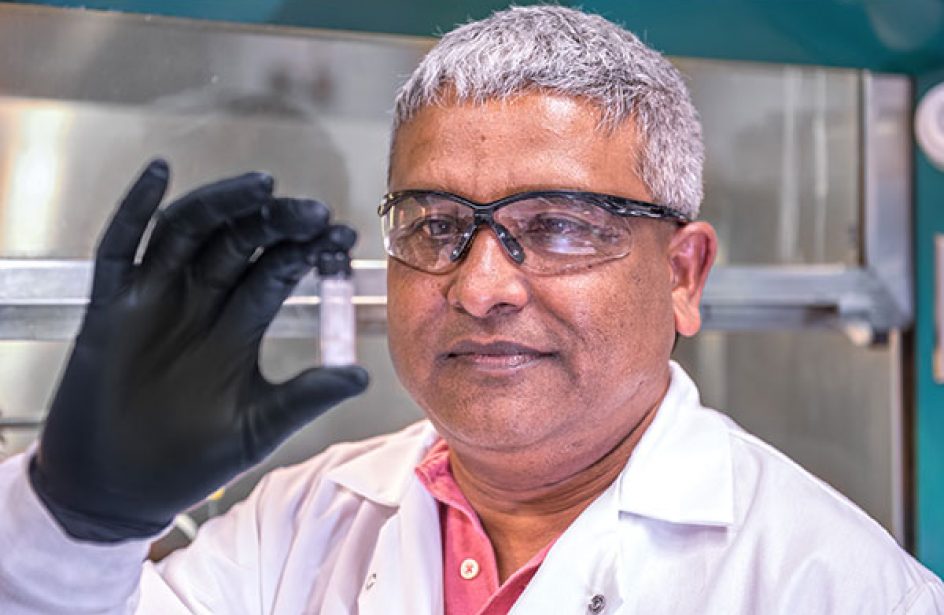 Dr. Anit Giri, a physicist with the U.S. Army Research Laboratory, observes a sample of a unique aluminum nanomaterial powder that reacts with water to produce hydrogen and oxygen. Source: David McNally/U.S. Army

Researchers of the United States Army announced the discovery last week of an aluminium nanomaterial that produces significant amounts of electricity when exposed to water.

According to scientists at the U.S. Army Research Lab at Aberdeen Proving Ground in Maryland, routine experiments discovered that a nano-galvanic aluminium-based powder caused water to bubble when added to it. Further experimentation showed that the material split water at the molecular level into its constituent elements of hydrogen and oxygen.

“The hydrogen that is given off can be used as a fuel in a fuel cell,” explained materials engineer and team leader Scott Grendahl. “What we discovered is a mechanism for a rapid and spontaneous hydrolysis of water.”

Though scientists have known for quite some time that elemental hydrogen can be stripped off of other chemicals in the presence of aluminium and a catalyst, the known processes for doing that required high temperatures, electricity, and/or toxic chemicals, making these processes impractical at best.

“In our case, it does not need a catalyst,” said Weapons and Materials Research Directorate physicist Dr. Anit Giri. “Also, it is very fast. For example, we have calculated that one kilogram of aluminum powder can produce 220 kilowatts of energy in just three minutes.”
In addition, the heat energy given off by the reaction is another potential source of energy, he explained.

“That’s a lot of power to run any electrical equipment,” said Giri. “These rates are the fastest known without using catalysts such as an acid, base or elevated temperatures.”

Grendahl went on to point out the significant potential such a substance could offer.

“There are other researchers who have been searching their whole lives and their optimized product takes many hours to achieve, say 50 percent efficiency. Ours does it to nearly 100 percent efficiency in less than three minutes.”

The powder is also a good candidate for use in 3-D printing, which could potentially make the material even more useful.

Researchers say this new substance could be of great help to reconnaissance units who require ready sources of power during long missions.

“These teams are out for a short number of days, three to five days, and a lot of that depends not only on their food supplies, but on how long their supplies last in terms of their equipment and right now that stems from lithium batteries,” explained Grendahl. “If we can recharge those batteries, they can stay out longer.”

“We all feel pretty good that this can contribute to a new kind of research to generate power at ease and at will,” opined Giri. “I come to work every day excited and enthusiastic.”