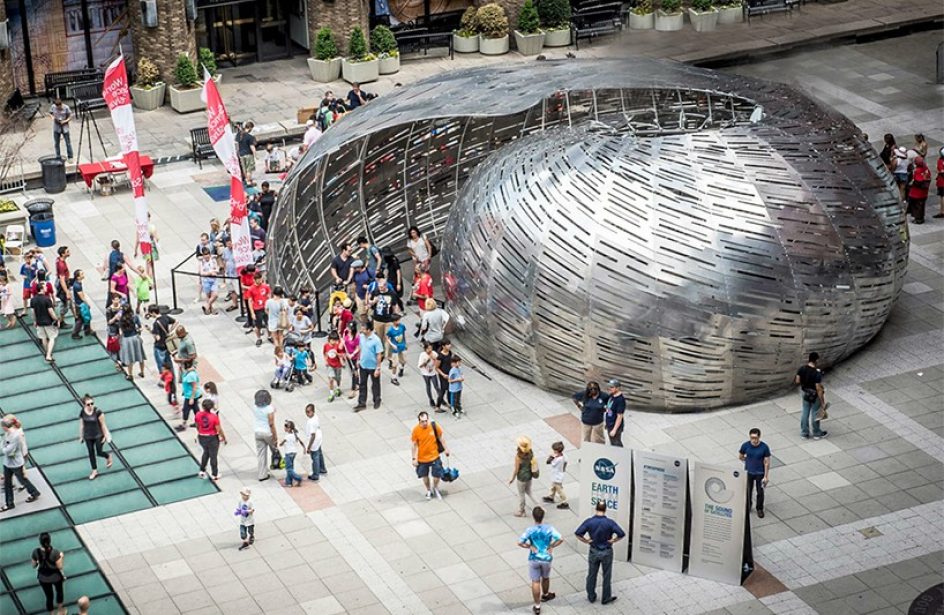 Taking a cue from a boyhood experience listening to the ocean in a seashell, a Brooklyn, New York team of artists created a much larger aluminium version designed to listen to satellites orbiting the Earth.

Jason Klimoski and Lesley Chang, who are together the art team of studioKCA, were commissioned by the United States government agency National Aeronautics and Space Administration (NASA) to build the “NASA Orbit Pavilion.” The traveling exhibit consists of a 1,100 square foot chambered nautilus structure out of aluminium, made up of 3,500 square feet of water-jet cut aluminium panels. The panels are scribed with over 100 “orbital paths” fitted together and attached to the framework, which is made up of aluminium tubing.

Within is a space thirty feet in diameter with an oculus in the center, which is termed an “orbit pavilion.” Speakers line the inner surface of the nautilus, programmed to map, translate, and then broadcast the sounds of nineteen orbiting satellites in real time. In what the artists call a “3d sound chamber,” people can listen to the sounds of satellites as they orbit the Earth above, around and below them. Perforations on the surface echo the flight patterns of these satellites, which helps to keep exterior noise out and keep the wind load down, as the aluminium structure is light for its size.

The exhibit debuted at last summer’s World Science Festival in New York City. The artists say that the pavilion will “wash ashore” at the Huntington Library Botanical Gardens in San Marino, California this coming spring.