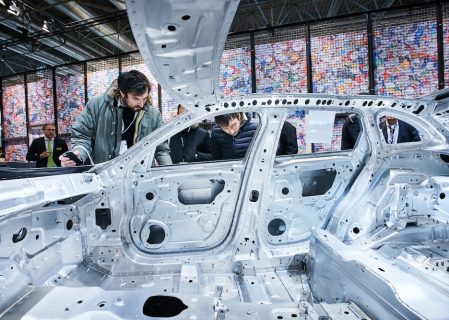 Steel Versus Aluminium: Who’s Winning the Lightweighting Battle In Cars?

Much like the metals industry, automobile manufacturers are continually and significantly investing in research and development, from developing new alloys and materials with improved properties to perfecting the latest techniques in the welding and shaping of various materials and alloys. These efforts...

Brunel University London announced a second new partnership this week, this one with lightweight castings firms to develop high-performance cast...

Michigan wheel manufacturer Maxion Wheels debuted a new, forged aluminium line of commercial truck wheels on Wednesday at Heavy Duty Aftermarket Week 2017 in Las Vegas. The wheel is a CV four-point wheel made from forged aluminium and designed to appeal to the growing desire for operators of commercial vehicle fleets to incorporate light-weight parts […]

Norway’s Sapa AS has developed a revolutionary new automobile brake line using a high-strength aluminium alloy. The new system, which was announced yesterday, will be officially debuted at IZB in Wolfsburg, Germany later this month. “The entire industry is on a mission to reduce weight in cars as a key to lowering emissions,” explained innovation […]

An internal release from American aluminium major Alcoa indicates that the 2018 Jeep Wrangler will utilize aluminium alloy for portions of the vehicle’s hood and doors. The addition of aluminium is part of Fiat Chrysler’s redesign of the iconic four-wheel-drive vehicle. “A team in the Farmington Hills (Michigan, USA) Aerospace and Automotive Products group is […]

A study released yesterday projects that the percentage of aluminium in automobiles to increase by roughly one third in the course of the next decade. According to a study by consulting and research company Ducker Worldwide and commissioned by European Aluminium, the use of aluminium in the automotive industry is expected to rise significantly through […]