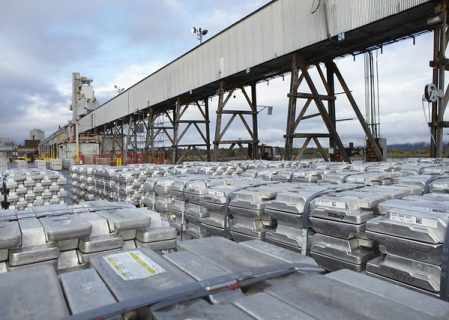 The Aluminum Association published an open letter to U.S. Trade Representative Robert Lighthiser on Thursday seeking to convince the Trump Administration to continue excepting North American producers from Section 232 aluminium tariffs. The letter, which was signed by more than a dozen...

The Aluminum Extruders Council yesterday called upon the Trump Administration to end Section 232 tariffs on imported aluminium, noting the...

Though praising the country’s executive, United States President Donald Trump did not indicate that he would back down on planned...

Tariffs on some imported aluminium and steel products will rise next month after United States President Donald Trump issued a proclamation alleging that producers from some countries are circumventing existing import tariffs by shipping derivative goods instead of raw metal. On Friday the White House issued the proclamation which boosts the duties on derivative aluminium […]

The Trump Administration’s threatened tariffs on imported aluminium and steel from Brazil are apparently no longer on the table after a conversation between the U.S. president and the Brazilian head of state last week. According to comments made in the course of a Facebook live video session on Friday by Brazilian President Jair Bolsonaro, a […]

The Aluminum Association voiced its opposition late last week to exclusion requests under Section 301 for aluminium can sheet originating from the People’s Republic of China, reasoning that such requests will work against the Middle Kingdom’s oversupply problems. In its weekly report, the Association followed up a Letter of Objection to the Office of U.S. […]

Citing currency weaknesses that he says are harming the American farmer, United States President Donald Trump announced on Monday the reimposition of import tariffs on aluminium and steel from producers in Brazil and Argentina. A surprise pre-dawn tweet by the head of the executive branch sent chaos through the ranks of trade officials from both […]

Responding to reports that the Trump Administration is weighing tariffs on aluminium imports from Australia, Prime Minister Scott Morrison said yesterday that his country’s aluminium producers have complied fully with the current deal in place between the two governments. In comments to reporters in the Solomon Islands, Morrison defended his country’s aluminium exporters, saying they […]