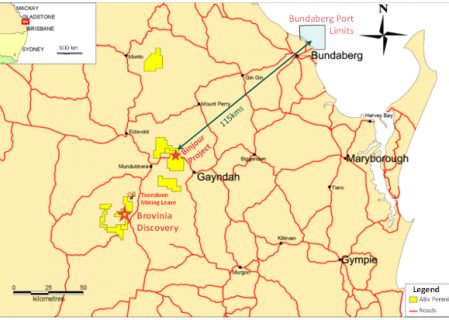 Australian Bauxite Limited (ABx) yesterday announced the full funding of mining operations at the Binjour Bauxite Project in Queensland. Per the firm, the project achieved full funding thanks to a commitment by India’s Rawmin Mining. Per the agreement, the project will be...

Anglo-Australian mining giant Rio Tinto Group said yesterday that operations at Weipa are back to normal after a brief closure...

Anglo-Australian mining titan Rio Tinto Group announced on Friday the completion of commissioning of its Amrun bauxite operations at Cape...

Brisbane’s Metallica Minerals Limited announced yesterday that it has obtained a mining lease from the Australian state of Queensland. The...

Brisbane’s Metallica Minerals Limited announced yesterday that it has received federal approval under the Environment Protection and Biodiversity Conservation Act 1999 to develop Urquhart Bauxite Project. According to the firm, federal approval is a tremendous milestone on the road to mining bauxite ore at the project, which is located 3.1 miles southwest of Weipa on […]

Anglo-Australian mining giant Rio Tinto began work on a new bauxite mine in Cape York by awarding a US$53-million contract to Queensland civil engineering firm QBrit. The new mine, dubbed the Amrun Project, is a US$2 billion operation that is expected to harvest 22.8 million metric tons per annum at the outset, with an option […]

According to fourth-quarter numbers released by Rio Tinto on Monday, its refinery at Yarwun, Australia, set a production record last year. Rio Tinto’s final numbers for last year show the Yarwun refinery’s production at 2.104 million metric tons, which was an eleven-percent increase over 2015. When taken together with Rio’s other refinery at Gove, the […]