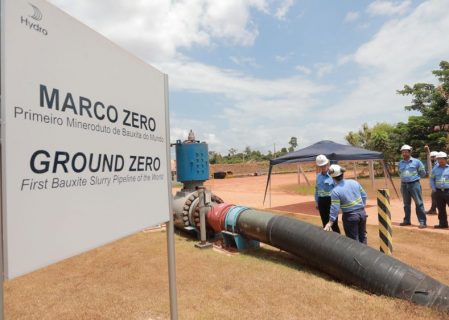 Hydro Halts Production At Paragominas Bauxite Mine For Pipeline Repairs

Norwegian aluminium smelter Norsk Hydro ASA said yesterday it has halted the flow of bauxite ore through the pipeline out of Mineração Paragominas to the Alumina do Norte do Brasil refinery for an extended period of maintenance. The move has resulted in...

Norwegian aluminium smelter Norsk Hydro ASA said yesterday that operations at Paragominas bauxite mine and Alunorte alumina refinery have been...

Norwegian aluminium giant Norsk Hydro ASA announced on Thursday a power outage in Brazil affecting the firm’s bauxite mine and alumina refinery in the state of Pará. According to Hydro’s press release, a transmission tower toppled on Wednesday, cutting power to Mineração Paragominas S.A. Though no injuries were reported, the mishap has temporarily halted production […]

Norwegian aluminium giant Norsk Hydro ASA said yesterday it will soon implement a plan to increase returns and cash flow via a wide-ranging effort at improving and restructuring its business areas, all while emphasizing sustainability in its business practices. The plan, which will be unveiled at Hydro’s Investor Day 2019, will outline Hydro’s new strategic […]

Norwegian aluminium producer Norsk Hydro ASA released financial results for the second quarter on Monday. The firm’s bottom line suffered due to the twin effects of a drop in prices and an attack on the company’s IT systems. In the second quarter, Hydro reported an EBIT of NOK656 million, down on the year from last […]

The Aluminium Stewardship Initiative (ASI) announced certification for two more plants under the Norsk Hydro umbrella yesterday, namely the Paragominas bauxite mine and the Alunorte alumina refinery in northern Brazil. The ASI said the two operations passed certification for both its Performance Standard and Chain of Custody Standard. Hydro’s scrap re-melting and casthouse operations have […]

Just days after the Brazilian federal government gave Norsk Hydro the go-ahead to resume alumina production at the Alunorte refinery, the state environmental department acquiesced to the plant’s partial reopening under its supervision. On Monday, the Pará Secretary of State for Environment and Sustainability (SEMAS) signed off on Hydro’s petition to utilize the press filter […]