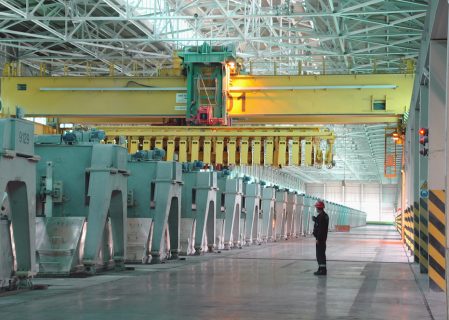 Russian Federation aluminium behemoth UC Rusal said yesterday that it has signed an agreement with PJSC Sberbank to collaborate on their Environment, Social and Governance (ESG). The agreement’s ultimate aim is to attain UN Sustainable Development Goals. The announcement was made at...

Russian Federation aluminium titan U.C. Rusal closed the bookbuilding process for this year’s fourth placement of a ruble-denominated bond on...

Russian Federation aluminium titan U.C. Rusal announced yesterday the closing of the book-building process for the second successful ruble bond placement the firm has made this year on the Moscow Exchange. The just-completed bond placement is a 10-year bond with a 3.5-year put option and has a nominal value of ₽15 billion (US$236 million). A […]

In the first such move since sanctions from the United States government were removed earlier this year, Russian Federation aluminium titan U.C. Rusal announced the successful placement of a ruble bond on the Moscow Exchange. Rusal’s ruble-based bond placement consisted of a 10-year term with a 3-year put option. The bond’s nominal value was ₽15 […]

Russian Federation aluminium titan U.C. Rusal has priced the second tranche of Panda Bonds according to an announcement released by the firm yesterday. According to the company’s press release, the second tranche has a total principal amount of CNY500 million (USD76 million, RUB4.4 billion), a tenor of 2+1 years, and a coupon rate of 5.5% […]

Global Aluminium Deficit to Rise to 1.8 MMT in 2018: Rusal’s Mukhamedshin

The second-largest aluminium producer on Earth expects a global aluminium deficit as large as 1.8 million metric tons next year, with the widening divergence between supply and demand due to a drop in output from the People’s Republic of China. UC Rusal’s Deputy Chief Executive Oleg Mukhamedshin predicted the rise from this year’s 1.3 million […]

Russian Federation aluminium behemoth UC Rusal hasn’t wavered from its goal of converting entirely to clean energy by the end of the decade, despite the recent departure of the United States from the 2015 Paris climate accord. In remarks to the South China Morning Post, Deputy CEO Oleg Mukhamedshin reaffirmed his company’s commitment to the […]