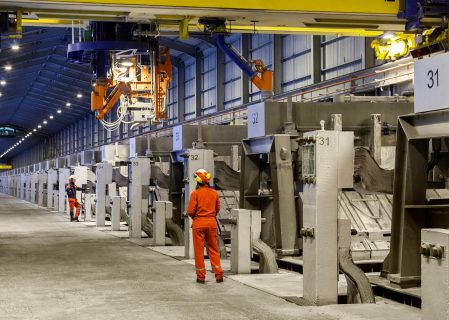 American primary aluminium producer Century Aluminum Company announced this week the signing of a letter of intent between its subsidiary Nordural Grundartangi ehf and green technology firm Ocean GeoLoop on a project to cut the aluminium smelter’s carbon emissions. Nordural will have...

Century Aluminium announced this week that its subsidiary Norðurál Grundartangi broke ground on a new US$120 million low-carbon aluminium billet...

Chicago-based aluminium smelter Century Aluminum announced this week that its subsidiary Norðurál Grundartangi ehf has come to an agreement with Iceland’s national power company Landsvirkjun to continue its contract for 161 MW per annum for the next five years. The agreement will bump up the total power to the plant by 21 MW. Century said […]

American aluminium smelter Century Aluminum Company announced yesterday the launch of a new low-carbon aluminium made with energy soley derived from renewable sources. According to the firm, Natur-Al is produced in a process that releases just one-fourth of the CO2 of the industry standard. Natur-Al produces only 4 metric tons of CO2 per metric ton […]