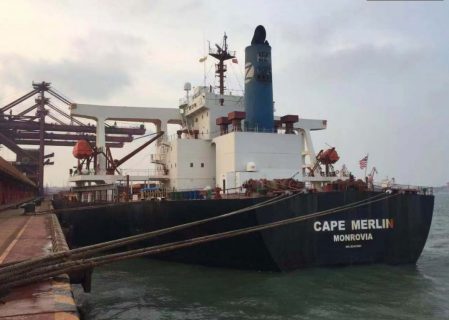 Independent mining firm Alufer Mining Limited announced yesterday the commencement of detailed engineering studies at the Bel Air bauxite mine to determine the feasibility of expanding production to 10 million metric tons of bauxite ore per annum. Per a press release issued...

Guinean’s president Alpha Conde will be taking a more active role in the country’s bauxite industry with the assumption of...

Ghana’s Vice President, Dr. Mahamudu Bawumia said on Tuesday that his government is in talks with the Guinean government to...

Though other metal projects are struggling, the Guinean government has voiced its commitment to becoming a global leader in the...

UAE aluminium smelter Emirates Global Aluminium PJSC (EGA) announced yesterday the departure of the first train loaded with bauxite from subsidiary Guinea Alumina Corporation’s mine and its safe arrival to port facilities on the coast. The milestone three-hour, 55-mile journey consisted of 80 railcars loaded with 6,800 metric tons of raw bauxite ore. The ore […]

With Guinean President Alpha Conde and other dignitaries looking on, bauxite miner Alufer Mining Limited officially opened its Bel Air Mine late last week. Among the other dignitaries in attendance was Guinea’s Minister of Mines, Guinean parliament members, American and British ambassadors, and local politicians. Though the ceremony marks the official opening of the mine, […]

Another aluminium firm hailing from the People’s Republic of China has staked its claim in West Africa, as this week saw Xinjiang Joinworld Co. Ltd announce plans to build an alumina refinery in Guinea. According to a filing made to the Shenzhen Stock Exchange on Monday, Xinjiang Joinworld said that the US$831-million project will be […]

Guinean miner Societe Miniere de Boke (SMB) and Singaporean shipping titan Winning Shipping signed an agreement with the Guinean government on Monday to construct the nation’s first-ever alumina refinery. The consortium said in a statement released yesterday that the refinery, with an expected nameplate capacity of 1 million metric tons per annum, will begin construction […]