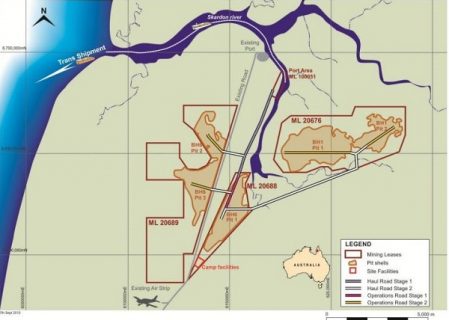 Brisbane’s Metro Mining Limited is in line to become the new owners of Gulf Alumina after Gulf’s board unanimously recommended that its shareholders accept Metro’s offer. The approval of Metro’s offer by Gulf’s board is the penultimate step in Metro’s bid to...

Brisbane’s Metro Mining Ltd. said on Wednesday that the board of Gulf Alumina Limited confirmed its offer to buy all...

Brisbane’s Metro Mining Ltd announced yesterday that it has papered an agreement with the People’s Republic of China’s Xinfa Group....

Australia’s Metro Mining Limited announced yesterday that it has signed agreements to increase its stake in Gulf Alumina Limited to roughly 39% of the latter’s issued capital. Metro Mining says that the agreement means acquiring the shares held by four long-term Gulf shareholders. The acquisition cost Metro Mining A$8.5 million, which was funded by an […]

Bauxite mining on Australia’s Cape York is proving to be a boon for many members of the area’s Aboriginal population, much of which is considered economically disadvantaged. Murray Korkatain, a Wik traditional owner interviewed by local media is preparing to enter into a Local Aboriginal Person traineeship. The eighteen-month program will teach him to operate […]

Australia’s Metro Mining Limited announced on Tuesday that it has obtained shareholder approval to issue shares to Greenstone Metro Holdings LP. The move is part of Metro’s strategic funding arrangement, allowing it to go forward on its Bauxite Hills project in Queensland. The US$6.7 million in shares issued to Greenstone makes the firm Metro’s largest […]