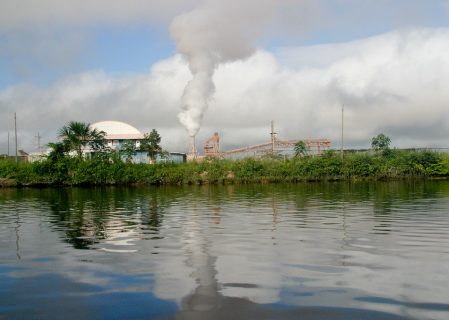 Guyanese Government Restarts Talks With Rusal Over Access To Aroaima Mine

The Guyana government has begun talks with Russian Federation aluminium giant UC Rusal over re-opening operations along the Berbice River. Two Rusal executives met with ministers of the Guyanese government last week in an effort at resolving the impasse that has restricted...

Due to a dispute with workers over compensation, Russian Federation aluminium titan U.C. Rusal shut down operations at the Bauxite...

Guyanese Government Promises Protection for Workers Laid Off Due to U.S. Sanctions on Rusal

The fallout continues due to the United States Treasury Department’s decision to sanction Oleg Deripaska and Rusal, as 200 workers...

The unintended consequences of United States sanctions upon Russian business interests continue, as German shipping group Oldendorff Carriers GmbH & Co. KG. cites U.S. Treasury Department sanctions levied against U.C. Rusal as the reason it has been forced to suspend its business with Guyana. In a statement sent to Reuters, Oldendorff said it plans to […]

Rusal’s Aluminium and Alumina Production Up in Q3, But Bauxite Production Off

Russian Federation aluminium titan U.C. Rusal released operating results for the first quarter of 2017 earlier today. Aluminium and bauxite production numbers were down slightly in the quarter, while bauxite production showed a marginal increase. Rusal’s smelters ran at a 95% utilization rate and turned out 910 thousand metric tons of primary aluminium in the […]

Russian Federation aluminium giant UC Rusal announced third quarter operating results yesterday. Production of alumina remained flat, while the numbers for aluminum and bauxite were up slightly. Third-quarter aluminium production totaled 920 thousand metric tons, which is unchanged quarter-on-quarter. Smelters in Siberia accounted for 94% of the production in the quarter, and overall smelter utilization […]

Moscow’s United Company RUSAL released its operating results for the fourth quarter and the fiscal year of 2015 today. The firm’s aluminium and alumina businesses held the line, while bauxite production showed a steep decline. According to released results, Rusal produced 878,000 metric tons of aluminium in last year’s fourth quarter, which is a four percent […]