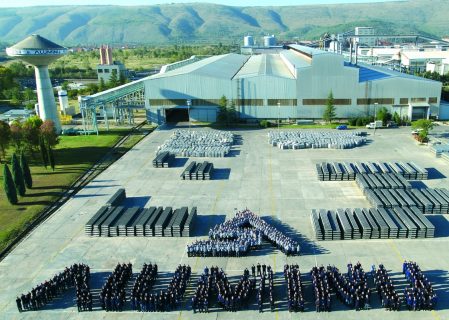 Bosnian aluminium smelter Aluminij d.d. Mostar signed a five-year deal this week with British-Swiss firm Glencore plc for the supply of aluminium billet. No details of the deal beyond its term were released to the press. The two firms have been partners...

Talks over the fate of Bosnian aluminium smelter Aluminij d.d. Mostar continue this week between the government and a Sino-Israeli...

Only days after they announced their pending resignation, Aluminij d.d. Mostar’s management said the entirety of the plant’s remaining workforce...

Citing the insufficiency of an offer tendered by the lone investor with an interest in funding a restart of the...

Despite overtures from Emirates Global Aluminuim PJSC and an infusion of cash from Glencore plc, Bosnian smelter Aluminij d.d. Mostar made the decision to shutter the plant and file for bankruptcy yesterday. Wire services reported that the plant was removed from the power grid just after midnight Wednesday morning due to the firm’s substantial outstanding […]

Talks are underway over the fate of Bosnian aluminium smelter Aluminij d.d. Mostar, as Emirates Global Aluminium PJSC and Glencore plc have both expressed interest to the Bosnian government regarding the formation of a strategic partnership with the struggling plant. According to domestic reportage, EGA is in the early stages of developing a plan for […]

Bosnia’s Aluminij d.d. Mostar stated Friday that 2018 will witness a 15-percent rise in aluminium production from the firm thanks to the government’s decision last week to eliminate import taxes upon unalloyed aluminium this year. The smelter said it would boost production in the new year to 184 thousand metric tons, allowing it to raise […]

Aluminij Mostar d.d., an aluminium smelter based in Bosnia & Herzegovina, celebrated this year twenty years since restarting production in 1997, after being severely damaged in the Bosnian war (1992-1995). But few had any reason to be cheerful: the smelter is going through an existential crisis that could very well seal its fate. Blighted by […]