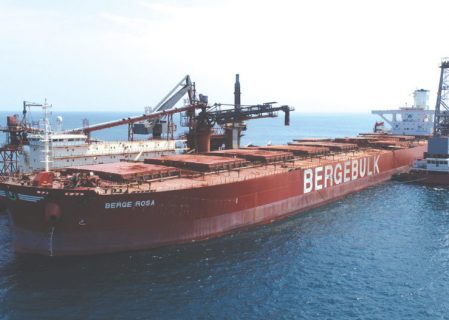 EGA Begins New Round Of Research Collaboration With MIT

Emirates Global Aluminium PJSC (EGA) began a new phase in its ongoing research partnership with the Massachusetts Institute of Technology...

Emirates Global Aluminium PJSC (EGA) recognized another milestone at its Al Taweelah smelter, as the 600 thousandth metric ton of...

EGA’s Construction of Bauxite Operations in Boké Reaches Half Completion

Emirates Global Aluminium PJSC’s (EGA) operations in Guinea reached 50 percent construction completion this week, with the firm announcing the same on Tuesday. Operating in-country under the auspices of Guinea Alumina Corporation, EGA is employing 4,000 Guineans to complete the US$1.4 billion project. The firm says first production is expected to commence early next year. […]

UAE’s Emirates Global Aluminium PJSC (EGA) revealed yesterday the signing of a long-term supply agreement with Shaheen Chem Investments LLC for the supply of ethylene dichloride and caustic soda to EGA’s Al Taweelah alumina refinery. As a result of the agreement, Shaheen Chem will soon commence planning for and construction of a chemical complex adjacent […]

Emirates Global Aluminium (EGA) has ordered an additional batch homogenizing furnace from Austrian aluminium equipment manufacturer Hertwich Engineering. The order, placed late last month, is for a furnace to be utilized in the heat treatment of billets and is expected to go into operation later this year. The furnace in question, which is the seventh […]

Abu Dhabi’s Emirates Global Aluminium (EGA) announced that it has achieved a major milestone in its Al Taweelah alumina refinery project. According to local media, the US$3 billion project has reached the point of sixty percent completion of its calciners. The plant, which is one of UAE’s biggest industrial construction sites, is employing 5,900 people […]