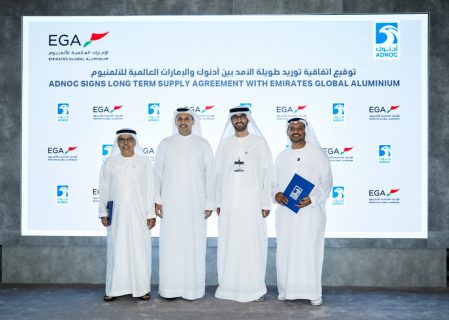 Emirates Global Aluminium PJSC (EGA) announced over the weekend the departure of the inaugural Capesize vessel from its bauxite mining...

Emirates Global Aluminium PJSC (EGA) recognized another milestone at its Al Taweelah smelter, as the 600 thousandth metric ton of...

Yesterday, Emirates Global Aluminium PJSC (EGA) greeted the arrival of the region’s first fully-laden Capesize vessel at its quay at...

UAE aluminium smelter Emirates Global Aluminium PJSC announced on Tuesday that it has joined with Abu Dhabi Ports in opening a new container freight station at Khalifa Industrial Zone Abu Dhabi (KIZAD) that is expected to trim over 180 thousand miles per year of transportation for EGA’s aluminium products. EGA says the new facility was […]

UAE’s Emirates Global Aluminium PJSC (EGA) announced yesterday the completion of its three-year, US$300-million project to upgrade production lines at its aluminium smelter at Jebel Ali. According to the firm, the plant’s production lines are now powered by proprietary technology that both increases production and reduces operating costs and environmental degradation. As of now, EGA’s […]