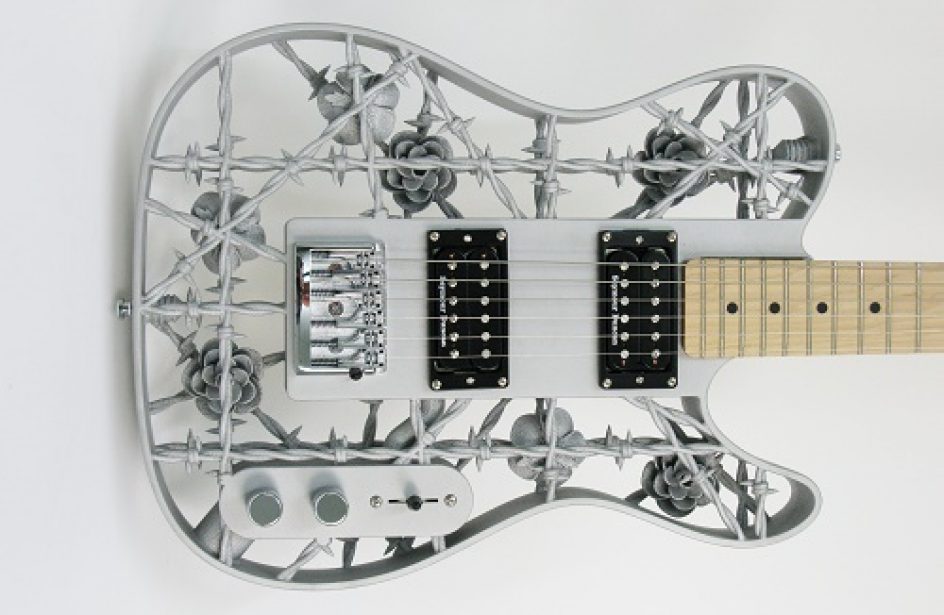 The logical next step to the world’s first aluminium guitar has been taken by a professor in Sweden – a 3D printed aluminium electric guitar.

Olaf Diegel explained that the reason he chose the 3D printing process to see what sorts of objects it was capable of making.  “[I also wanted] to better understand the intricacies of the whole process, from ‘design for additive manufacturing’, to the actual 3D printing of the guitar, to the post-processing that is required to go from a 3D printed metal part straight of the machine to a usable masterpiece,” he elaborated.

Students of rock history can easily identify the shape of the guitar’s body as Leo Fender’s iconic 1950 Telecaster, but with a barbed-wire theme within. “The guitar was originally nick-named War and Peace, but Heavy Metal seemed a more appropriately literal name,” said Diegel.

Initial design was done on Solidworks CAD software, and the actual printing was carried out by Xilloc in Holland. The body is 100% aluminium and was printed using an EOS M400 metal additive manufacturing system, which is specially made to lay down 0.1mm layers, as well as support and heat diffusion systems due to the high temperatures used.

After printing, the guitar’s body is essentially welded to the build plate, so that and all other supporting structures must be removed. In order to maintain the guitar’s intricate design, this was all done manually instead of by machine.

“Straight off the AM system, the surface finish could best be described to one similar to a sand-cast part. To my mind, the best way of thinking of current metal AM technologies is in exactly the same way one thinks of sand-casting. If, for example, we sand-cast an engine block, all the surfaces that require good surface finishes will need to be machined in a post-processing operation. If one thinks of metal AM in the same way, one will never be disappointed,” he explains.