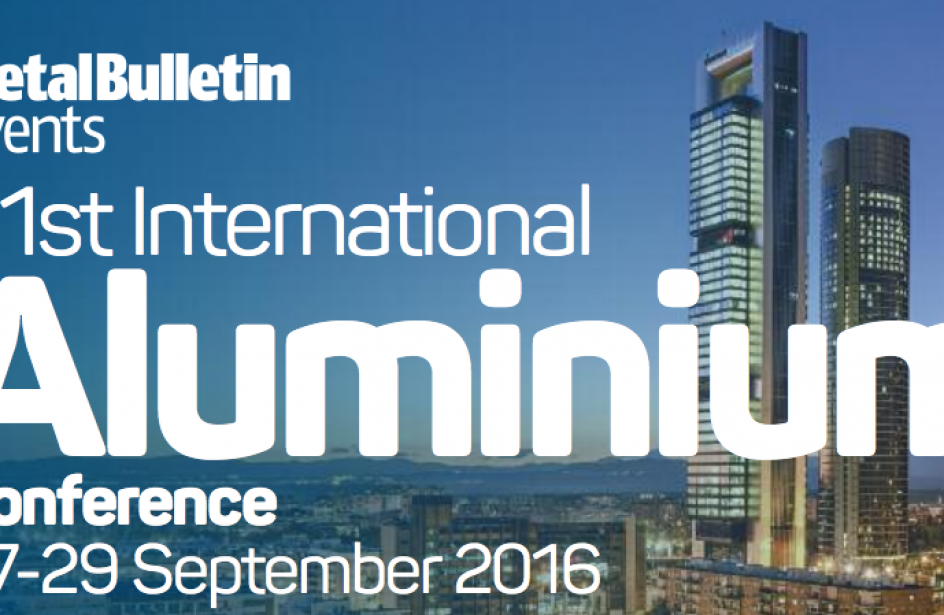 The 31st Metal Bulletin aluminium conference took place at Melia Avenida America Hotel in Madrid, Spain, from September 27th to 29th. Almost 400 delegates from all over the world participated. The conference covered significant topics in the aluminium market over the course of eight sessions featuring over thirty speakers.

Some of the highlights from the conference included:

The pre-conference seminar about sustainability and the Aluminium Stewardship Initiative (ASI), at which speakers included representatives of Alcoa, Rio Tinto, UC Rusal, Schűco Iberia from Spain, and Energia Potior from New Zealand. It was confirmed that ASI is an important issue for the industry and producers have started to measure the footprint and benefits to the society by consuming less resources, releasing less emissions, consuming less energy, etc.

Roland Dubois, Global Marketing and Development General Manager, Aluminium – Rio Tinto, said that Rio Tinto is committed to several dimensions of sustainable development: environment, social, governance and economic. He provided examples of each, illustrating how Rio Tinto is committed to supporting this initiative. Among others in the US, Rio Tinto has supported the restoration of a nationally-significant historic mining camp in California’s Death Valley to preserve the heritage and promote tourism in the area. Rio Tinto contributed US$ 1.5-million for construction and US$ 450,000 in annual operating costs for a new hatchery giving the endangered white sturgeon a chance at survival. Rio Tinto is one of Australia’s largest private-sector employers of Indigenous Australians who make up 7.3% of its local workforce. Finally, through the Extractive Industries Transparency Initiative (EITI), the company promotes open and accountable management of natural resources. Between 2004 and 2014 Rio Tinto invested US$ 75 million in a Regional Economic Development program, creating 2500 jobs and helping 162 projects.

Vladislav Soloviev, the CEO at UC Rusal, stated during a panel discussion that producers need to be disciplined and to refrain from making incremental increases in production during the next three years. “Stocks [of aluminium] are in surplus, but declining continuously. Three more years of discipline is needed – we don’t need a very high price level, it should rise simultaneously,” he explained.

He also mentioned that China had cut production recently by 4.5 mt, and semis exports from China are declining this year. There is also a growing use of aluminium in the automobile industry, which is a beneficial trend for aluminium producers, who need to try and decide how to benefit from this rising trend. There has been a switch in China’s policy and UC Rusal expects a balanced Chinese market in the following years.

Oleg Mukhamedshin, Deputy CEO at UC Rusal, during the session entitled, “Change and challenge up and midstream”, stated that global aluminium consumption will grow at a moderate 3% CAGR over the next 15 years. Due to tighter environmental standards, more secondary aluminium will be used in developed OECD countries, while the transportation sector will remain the key driver of aluminium demand as more innovative aluminium products and solutions are to be introduced.

UC Rusal expects Russia, the Middle East, and Australia to remain major aluminium supply regions to the rest of the world, China and India to be balanced markets, while European and North American market deficit will grow.

Sunil Sharma, Managing Director and head of EMEA commodities corporate sales at J.P. Morgan. In the “Markets” panel, along with other analysts Sharma said that the current commodities super-cycle has been led by the industrialization and urbanization of emerging economies, China in particular, whose rapid growth in the past two decades was particularly metals and energy-intensive. The current metals super-cycle experienced its peak between 2006 and 2011. He pointed out the length of the previous three down-cycles averaged around 23 years for aluminium. In the current down-cycle, we are in year nine. The real aluminium price is downward sloping, with the mean price of each super-cycle significantly lower than that of the previous cycle. The current drop in prices from peak is around 50%, a little shy of the last cycle’s draw-down of 66% off the peak. Aluminium prices seem to be fairly valued from a long-term perspective, but high levels of cost deflation in recent years imply prices could trade lower relative to historical ranges.

Global aluminium demand growth is expected to be around 5% (elasticity to global GDP growth of around 2x), while global supply is expected to exceed 5%.

In the same session Nicholas Snowdon, metals analyst at Standard Chartered Bank, said that the phase of aluminium premium correction appears close to an end in H2 2016. Smelter margin improvement in China should boost supply but availability of ingot remains tight, while the liquid metal market share increased in China. The bank calculated the global aluminium supply addition of 2.166 million tons in 2017, 3.538 mt in 2018, 3.852 mt in 2019 and 1.601 in 2020. China will continue to drive global supply with capacity utilisation of below 80% of total capacity this year. Snowdon expects global deficit of about 700 kT in 2017. The aluminium price (3-month) should average US$ 1,550/metric ton in 2016, and US$ 1650/metric ton in 2017, according to the bank.

Uday Patel, senior research manager at Wood Mackenzie, spoke in session V: “What does the future hold for Europe’s aluminium industry?” He explored several answers to the question, Is it possible to create a sustainable primary aluminium smelter model in the European Union? He stated that European dependence on primary aluminium imports will remain high and will reach 3.5 million metric tons this year. EU demand this year is about 8 mt, and production about 4.5 mt. By 2020, Wood Mackenzie expects demand to grow to around 8.4 mt, while supply will grow to 4.8 mt. Most imports are from Russia (over 40%) and then from Mozambique (around 15%). Some 25% (1.1mt) of EU production was loss making in 2016. He stated that EU smelters suffered from lack of modern efficient technology and that almost 2 mt of production has been shut since 1980. High-cost capacity shutdowns, lower oil prices, and stronger US dollar have helped to cap European electricity tariff escalation – average electricity costs were around US$ 460/metric ton this year due to lower costs in Norway and Iceland.

Patel concluded that creating a sustainable European smelter model for the industry will be challenging. Reliance on primary aluminium imports will grow over the medium and long term. Russia and Middle East to benefit from the smaller European primary smelting sector. Questions remain over long term sustainability, though a favorable US dollar and oil prices may provide a short term relief. Product mix at cast houses is key to survival. Also need greater scrap collection/generation and secondary aluminium in order to feed downstream requirements, concluded Petal.

Goran Djukanovic, who represented Aluminium Insider at the conference, during the same session spoke of sustainability of South East Europe’s smelting industry. He stated that there are five smelters in the region currently operating, down from seven in 1991. Production in the region was 608 kT in 2015, down from 790 kT in 2006. Over 80% of production is exported, mainly to the EU markets. Djukanovic provided a brief overview of each smelter and a number of key parameters of production and cost data for comparison purposes. He concluded that there is no immediate threat of closure of any smelter in the region, though KAP (Montenegro) and Aluminij Mostar (Bosnia) are in danger if the aluminium price remains low. Governments will most likely not allow closure in near future. The recently announced Aluminij Mostar sale is still uncertain to go through.

In session VI – “China: industry fundamentals in the world’s predominant market place -” Qin Junman, Vice President of China Nonferrous Metal Industry’s Foreign Engineering & Construction Co., Ltd. (NFC), presented on how China’s refining and smelting business restructuring is set to meet economic, state and trade imperatives. In an informative and interesting presentation he stated, among else, that some 55% of China’s smelters use 300-400 kA technology, 28% use 200-300 kA, 15% use 500-600 kA, and the remaining 2%, which is composed of mostly outdated technology, use less than 200 kA. 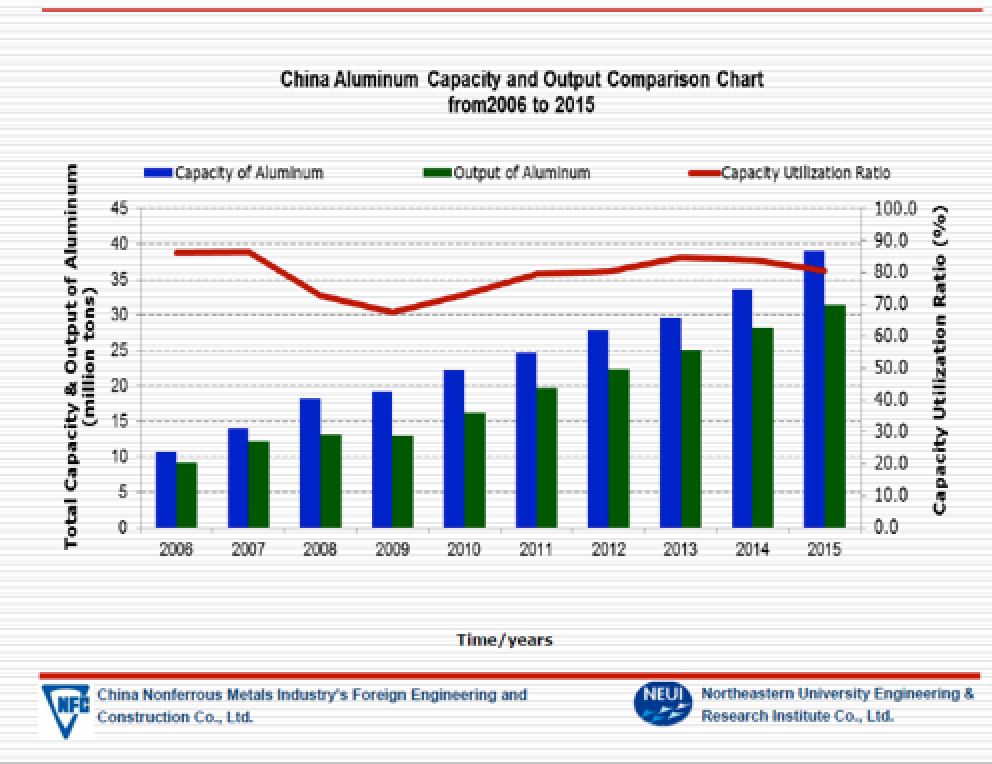 In August, 2008, the world’s first 400kA potline (which was the highest amperage at the time) was put into operation, namely, the NEUI400kA aluminium reduction potline of Henan Zhongfu Industry Co., Ltd. The potline’s working voltage was 3.78~3.9V, and DC consumption was ≤ 12500kWh/tAl.

Sunny Huang from BGRIMM, the Beijing General Research Institute of Mining & Metallurgy, a state-owned company, said that China’s aluminium consumption in 2015 was 31.1 million metric tons, representing a 10% growth year-on-year, and in 2016 expected growth to be 6.7% year-on-year. The slower growth is attributed to the slowdown of China’s economy and the adjustment of the industrial structure. She stated that China’s aluminium surplus was around 800 kT in 2015 and may peak in 2017 to over 1 million metric tons. The semi-product market balance would further widen in 2016 due to a supply increase of around 1.5 million tonnes.

In the last session of the conference (VIII) – “An insight into construction, aerospace and other end use dynamics -” John G. Thuestad, Executive Vice President of Sapa and president of Extrusion Europe, showed that extrusions exports from China in 2015 amounted 388.6 kT, while imports were 13 kT. European exports were 58.1 Kt and imports 151.6 kT while North American extrusion exports stood at 31.9 kT and imports 71.5 kT. He expects European Union extrusion market to grow by 1.9 % CAGR. 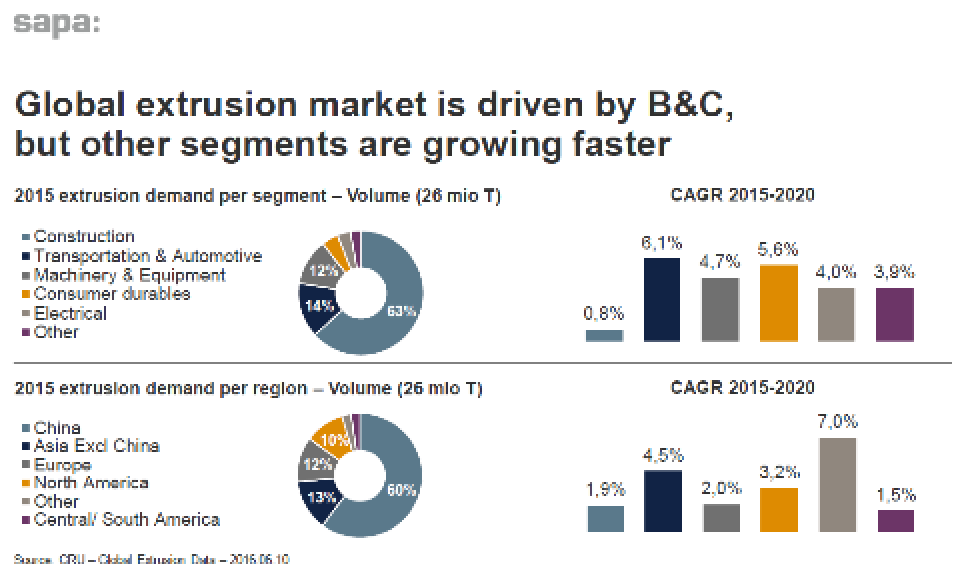 Thuestad said there will be “no big changes for the UK aluminium extrusions market” in the wake of the country’s vote to exit the European Union.

Construction is the single largest segment of global extrusions aluminium demand accounting for 63%, followed by transportation with 14%, and machinery and equipment with 12%. However, the highest growth by segment, CAGR 2015-2020, will be experienced by the transportation (and automotive) industries with growth of 6.1%, followed by consumer durables of 5.6%, while construction will have the slowest growth of 0.8 %.

SAPA delivered 1.3 million metric tons of extruded products in 2015 and had net sales of €6 billion.