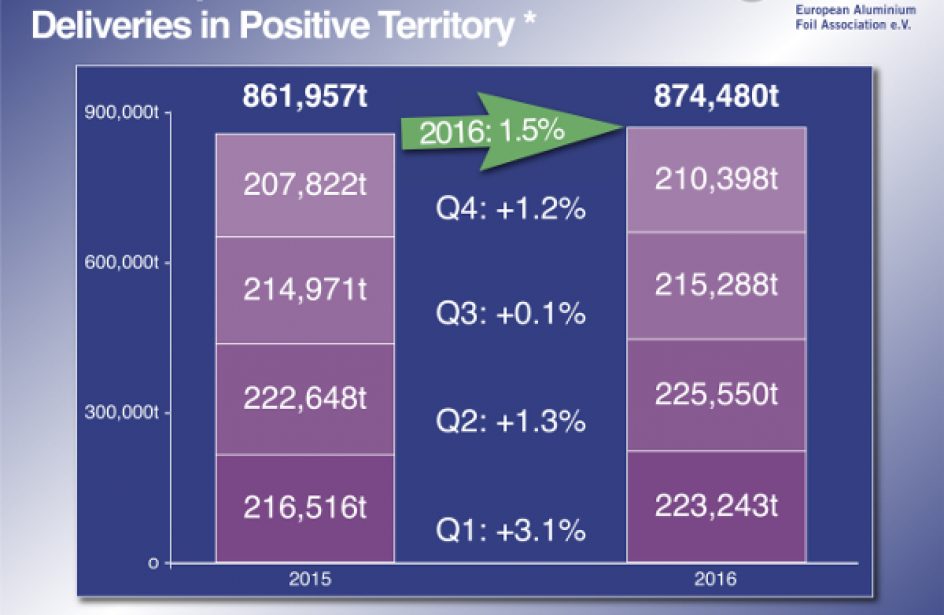 Delivery numbers just released by the European Aluminium Foil Association (EAFA) showed a strong showing for aluminium foil during the latter half of 2016, boosting the year’s total to its highest level in a decade. In addition, domestic deliveries were up year-on-year as well, and exported aluminium foil numbers surpassed expectations.

According to EAFA’s numbers, demand in the third quarter of the year was flat, but growth in the fourth quarter helped buoy the total to 874,480 metric tons for the year. The 1.5% increase translates to an all-time high, surpassing the previous high-water mark of 865,870 metric tons in 2006.

Exports rose by 1.3% year-on-year, reflecting an impact by overseas competition that was smaller than anticipated. Increases in the first and third quarters were more than sufficient to offset flagging numbers in the final quarter. A particularly bright spot were the thicker gauges which turned in a 20% increase in exports for the year.

Although numbers for the year were certainly encouraging, experts counseled caution in assuming that such numbers are reflective of a trend.

“To have exceeded the previous all-time high is very encouraging,” said EAFA’s Executive Director Guido Aufdemkamp. “But we have seen volatile swings in demand patterns quarter on quarter for both thinner and thicker gauges through the last years. While the overall performance is very robust we will remain alert to continuing changes in market circumstances.”