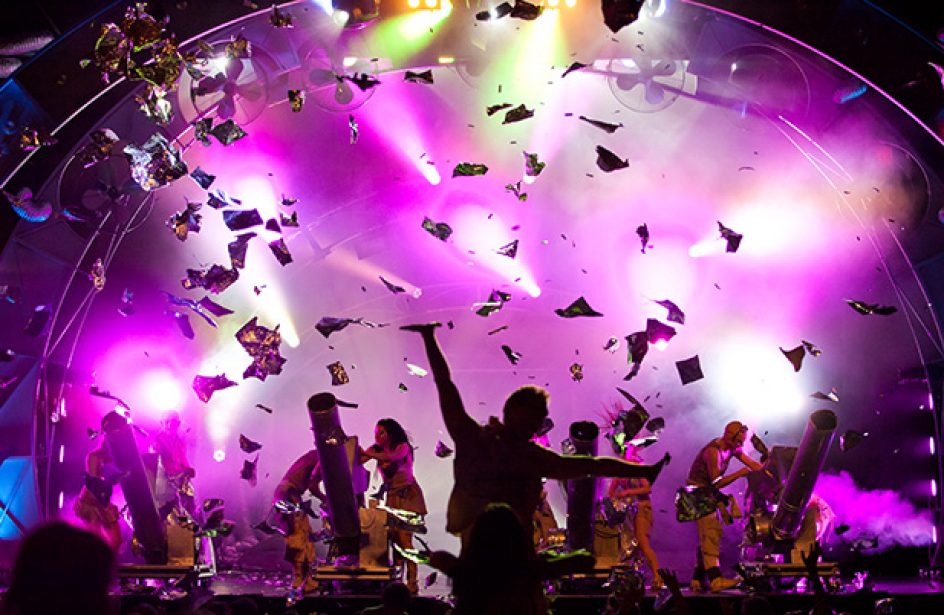 Aluminium pipes surround us on a daily basis at home, at work, at just about every location at which we find ourselves. Ever wonder what those pipes would say if they were given the power to talk?

Director and writer Lior Kalfo created just such a situation in his production, entitled “The Aluminum Show,” which is touring the United States through the end of November. Kalfo describes the show, which is a combination of visual theater, dance, and humor, as an “Alice in Wonderland” experience in a futuristic aluminium planet.

“We see aluminum silver pipes everyday, up in the ceiling as air condition pipes, but never think of them as live and animated characters with feelings, humor and stories,” explains Kalfo. “’The Aluminum Show’ brings to life more than 100 pipes in different sizes.”

“The show draws the viewer immediately into this wonders world of silver that is apparently cold but in fact is telling a heartful story about a pipe baby and a human astronaut lost in this world and have only each other to survive,” he continues. “The show is filled with surprises and constantly challenging the viewer’s imagination. You’ve never seen anything like it before.”

The all-ages show will be held at the Heymann Performing Arts Center in Lafayette, Louisiana. It then stops in five Texas venues for the remainder of the month, and progresses to seven cities in Florida with stops in North Carolina, Maryland, Connecticut, New York, and Ohio interspersed in between. The final stop of the tour is at People’s Bank Theater in Cleveland on November 19.

“’The Aluminum Show’ is an exciting display of imagination that literally reaches out to the audience,” said creative director Jacqueline Lyle. “There are so many different types of shows that come to our theaters and arenas; however, there’s nothing quite like this.”

Kalfo says he was inspired by the creator of the original Aluminum Show Ilan Azriel, who wrote the work visualized through the lens of a six-year-old child.

“I was one of the audience members in the first ‘Aluminum Show’ almost 15 years ago and was thrilled from it and from its artistic potential,” he said. “Along the years and parallel to Ilan’s evolution, I’ve made my own magical worlds playing with different materials, until our path collided more than a year ago when I was approached by Ilan to join the journey of the new aluminum adventure. I gladly jumped on the wagon.”

Kalfo says he hopes the show makes a lasting impression on its viewers.

“I would like to leave a mark on the viewer’s memory and ignite his imagination so he would talk about the show for weeks after. If I’ll be able to influence the viewers’ world, use my inspiration to inspire them, that would be my pure satisfaction. when someone approach me in the street saying, ‘I saw your show more than 20 years ago and It was a unique experience in my life,’ my artist’s ego is getting a huge kiss.”