The new U.S. administration, precisely president Donald Trump, is preparing to implement a set of measures aimed at bringing back production and jobs on US soil in the automotive industry, among others. Trump has made it quite clear: he will not allow automakers to build cars in Mexico and export them to the U.S. Moreover, Trump also shot back at German car producers and threatened that he would impose a border tax of 35 % on vehicles imported to the U.S. market, drawing sharp rebukes from Berlin and hitting the automakers’ shares. “I would tell BMW that if you are building a factory in Mexico and plan to sell cars to the USA, without a 35 % tax, then you can forget that,” Trump said.

If this new import/export policy turns out successful, it will result in a higher production of vehicles in the U.S. and would consequently lead to a higher use of aluminium. It would be beneficial not only to American aluminium rolling mills and extruders but it also may lead to restarting some primary aluminium capacities and would lead to increased production in the future, thereby bringing back jobs in that segment as well. 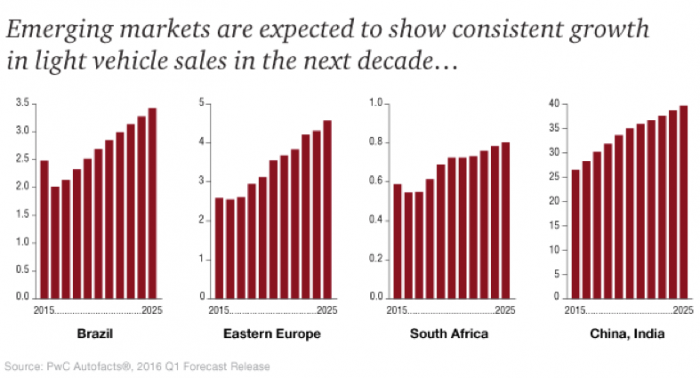 All in all, producing vehicles in Mexico or elsewhere and exporting them to the U.S. will soon not be so attractive for automobile producers. However, General Motors’ Chief Executive Mary Barra stated that ‘’the company has no plans to change production plans despite Trump’s criticism’’. Ms. Barra, who is a member of a group of CEOs that will advise Trump on economic issues, noted that capital decisions in the auto business are made several years in advance. This means that General Motors and other producers currently investing in Mexico will encounter much higher costs if they want to sell cars north of the border or they would be forced to export cars from Mexico to other parts of the world. 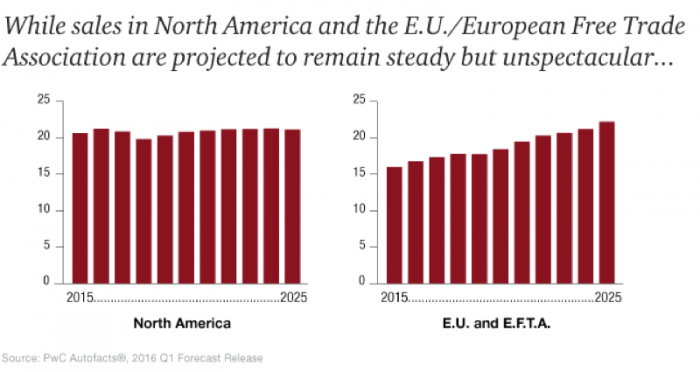 Aside from the greenfield investments already announced, the increases in North American vehicle production will be the result of investments into existing facilities designed to increase efficiency and capacity.

Prior to this latest developments, the Center for Automotive Research projected that the U.S.’ share of North American automotive production would fall from an all-time low of 63% in 2016 to 58% in 2020. However, Trump’s strategy of returning jobs to USA may reverse this falling trend if it proves successful.

U.S. vehicle sales totaled 17.55 million in 2016, beating 2015’s record of 17.47 million, according to Autodata Corp. It was the seventh consecutive year of year-over-year sales gains. However, The National Automobile Dealers Association expects U.S. sales to drop to 17.1 million vehicles in 2017 as interest rates and vehicle prices rise. Also, large numbers of cars coming off leases will hit the used-car market this year, putting pressure on new-car sales.

Strong demand for aluminium in cars

Aluminum’s use in autos and commercial vehicles is accelerating. From best selling vehicles like the Ford F-150 to luxury cars like Audi, Mercedes Benz and Land Rover, aluminium is increasingly becoming the “material of choice” for automakers thanks to its properties and environmental advantages. The recent trend is that consumers in the U.S. have gravitated toward SUVs and trucks while turning away from passenger cars. Last year, car sales fell 7% while truck and SUV sales rose 8%.

UACJ is predicting aluminium sheet used in passenger vehicles will rise at least ten-fold to 1 million tonnes by 2025, after automakers in the United States start adding them to popular sedans from around 2019 or 2020.

According to Constellium, automotive aluminium body sheet demand in North America alone is projected to double from 500,000 metric tonnes in 2015 to 1 million by 2020.

Fiat Chrysler invested $1 billion in two U.S. factories, and added three new Jeeps to its production portfolio, including a pickup truck in its bid to increase production of hot-selling SUVs and reduce its lineup of small and midsize cars. The Italian-American automaker said it will modernize a factory in the Detroit suburb of Warren, by 2020, to make the new Jeep Wagoneer and Grand Wagoneer large SUVs. A factory complex just south of there in Toledo, Ohio, will also receive new equipment to produce the new pickup. The expansion is expected to create 2,000 new jobs.

BMW’s factory in Spartanburg, S.C., is the brand’s biggest plant in the world, and it will become even larger when a $1 billion expansion is completed this year. Last year, it built a record 400,904 vehicles – topping that of any of its factories in Germany factory, according to BMW.

Ford announced a $1.4-billion, 500-job investment in its Livonia, Michigan, transmission plant, where it will build a 10-speed rear-wheel-drive transmission. Ford won Trump’s praise when it announced plans to cancel a planned $1.6 billion factory in Mexico and expand the Michigan plant.

Tesla will invest nearly half a billion dollars in order to expand the production capacity of its ‘’Gen 2 vehicles’’ to 195,000 units per year by 2021.

Investments in new auto factories in Mexico are surging as well. Installed capacity is likely to grow more than 50 % over the next five years (mostly for North American market, but also for exports globally). Mexico exports around 3 million vehicles annually, with 70% of them shipped to the U.S. and its growth of production capacity has been dramatic in recent years. A series of new plants planned by Kia Motors, Audi, BMW, Honda, Mazda, Nissan/Infiniti, Mercedes-Benz, and Toyota Motor should become operational by 2019.

Toyota is currently building a $1 billion Corolla production plant in the state of Guanajuato in Central Mexico. The plant will employ about 2,000 workers and make 200,000 vehicles annually. Last year Audi has launched a new $1.3 billion factory in San José Chiapa, in the state of Puebla, while its parent Volkswagen Group has launched a new engine plant in Guanajuato. Also Hyundai (Kia) started production close to Monterrey in Nueva Leon. In 2017, a new joint-venture plant between Nissan and Daimler AG will begin building Infiniti and Mercedes-Benz products in the city of Aguascalientes.

BMW invests around $ 1 billion in a new plant in Mexico, which is due to go into production in 2019 and create at least 1,500 jobs.

Ford Motor Co. will continue investments in new plants in Mexico despite the fact that it cancelled one plant recently. Ford was the first carmaker to enter the market more than 90 years ago, while the production levels have remained fairly constant over the past several years (some 433,000 vehicles per year). 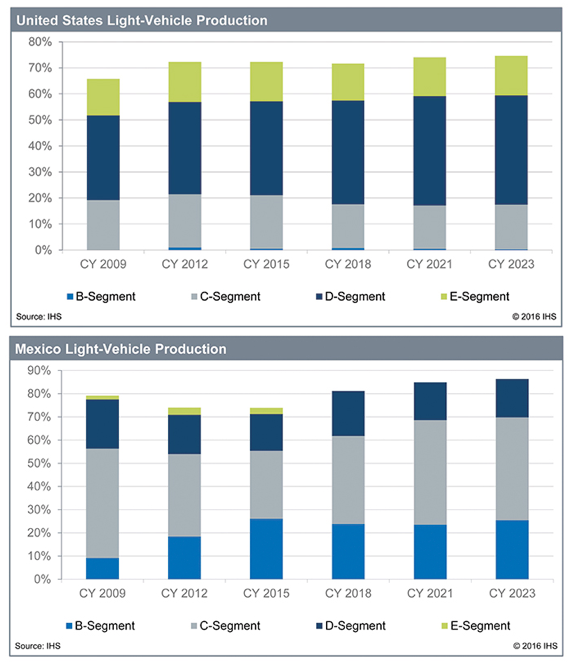 The Mexican government plans a $100-billion spending package aimed at building new rail lines and improving ports. Although Mexican rail companies are making significant capital expenditures there is much more work that needs to be done.

The rail companies in Mexico, such as Ferromex and Kansas City Southern de Mexico (KCSM), have made significant investments in both railcars and infrastructure to secure capacity for future growth of vehicles exports. Approximately 80% of automotive exports are shipped by rail to the U.S. and Canada, with the remainder by sea. In reaction to emerging rail constraints, OEMs are looking at “short-sea shipping” as a viable supply chain solution to export vehicles. Volkswagen, for instance, transports roughly half of its Mexican exports by sea from its long-time assembly plant in Puebla. More recently, Honda, Mazda, Nissan, General Motors, Fiat Chrysler, and Ford have increased their use of short-sea carriers.

Aside of investments in transport infrastructure in Mexico, another important investment opportunity is gathering pace, but in USA: the so called connected and intelligent cars are just beginning to make inroads in the auto industry, and are already having a powerful impact on the way automakers are adjusting organizationally. In essence, fully digitized vehicles with Wi-Fi, advanced infotainment systems and applications such as vehicle-to-vehicle communications that let communication and data exchange between cars on the road, some basic safety data such as speed and position, and real-time location services and routing based on traffic conditions and networked Web links that facilitate vehicle diagnostics and repairs are no longer pipe-dreams. What’s more, all these innovations would need transmitters and other installations consisting of aluminium, among else.

The conclusion is that there are huge ongoing investments in new car production capacities both in Mexico and USA, investments in automotive sheet and other automotive products in USA and investments in transport infrastructure in Mexico, and in car-digitalization in USA. Not only will the increased production of cars contribute to increased usage of aluminium but it will also increase the content of aluminium used per car, while investments in transport infrastructure and new digitalized vehicles will lift demand as well. Taking into account that average aluminium content in new cars in North America is around 180 kg and growing, it is not a surprise to see ongoing investments in production capacities for aluminium products meant for the automotive industry. The trend will continue through the next decade at least, with aluminium being the key material in achieving the future technological goals.

Looking ahead, recycling will have a key role in aluminium use in the automotive industry. A recent research from the Worcester Polytechnic Institute’s (WPI) Center for Resource Recovery and Recycling confirms an overall recycling rate of 91 % for automotive aluminum. This study also confirms conclusions that aluminum is the most sustainable choice for the environment.