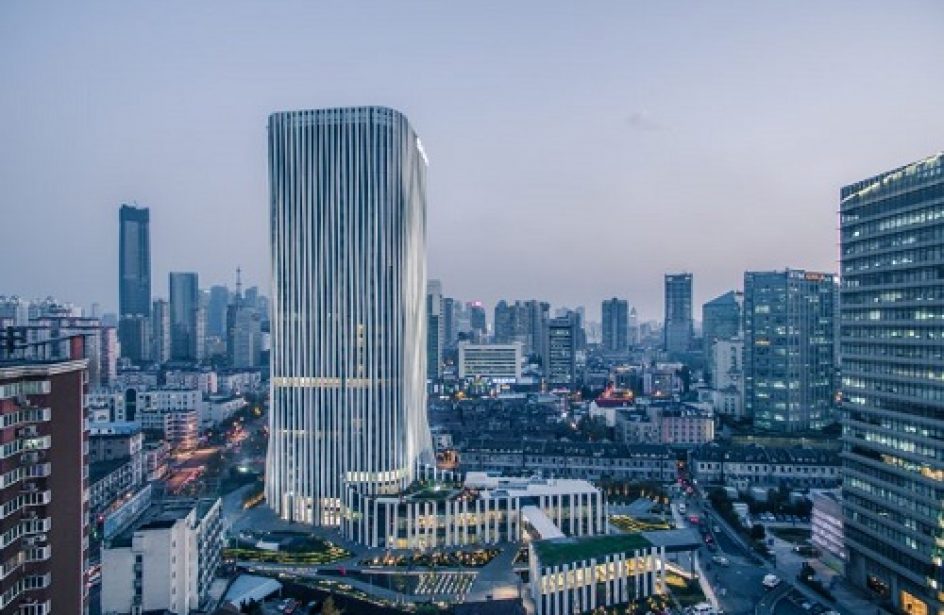 How do you give pleats to a flat-front building? Japanese architect Kengo Kuma recently did just that when he adorned the façade of a Shanghai tower with strips of perforated aluminium.

“For the facade, we created pleats, made of aluminium mesh like woven lace, which forms a soft dress for women,” said Kengo Kuma and Associates.

Kuma used 18-mm-wide aluminium mesh to cover the 24-storey SOHO Century Plaza, simulating the pleats of a draped dress. The pleats are angled to give the impression of rippling as well.

“The pleats change their expressions gradually according to the angle, strength, and tone of sunshine,” explained Kuma.

The building, which is in the Lujiazui Bamboo Garden commercial and trade district in Shanghai’s Pudong neighborhood, is a Grade 5A office that opened for leasing in August 2012, and has a total gross floor area of 646,000 ft2. While the upper floors house private offices, the ground floor opens up into a shared space. The façade’s strips and perforation allow a view onto the adjacent street.

“The building is open and linked with the city outside,” the studio went on. “The image of gentle connection is expressed in the facade and public space of the building. The public space is also like a creature’s skin, represented with stone and aluminium panels, which creates an atmosphere totally different from ordinary hard buildings.”

Both an architect and professor at the Graduate School of Architecture at the University of Tokyo, Kuma is known for both his architecture (often drawing comparisons to other architectural luminaries like Shigeru Ban and Kazuyo Sejima) and his significant bibliography. He established the Kengo Kuma & Associates in 1990, which now employs over 150 architects in Tokyo and Paris. He has also taught at Columbia University, University of Illinois at Urbana-Champaign, and Keio University. Kuma received his Ph.D. at the latter institution.