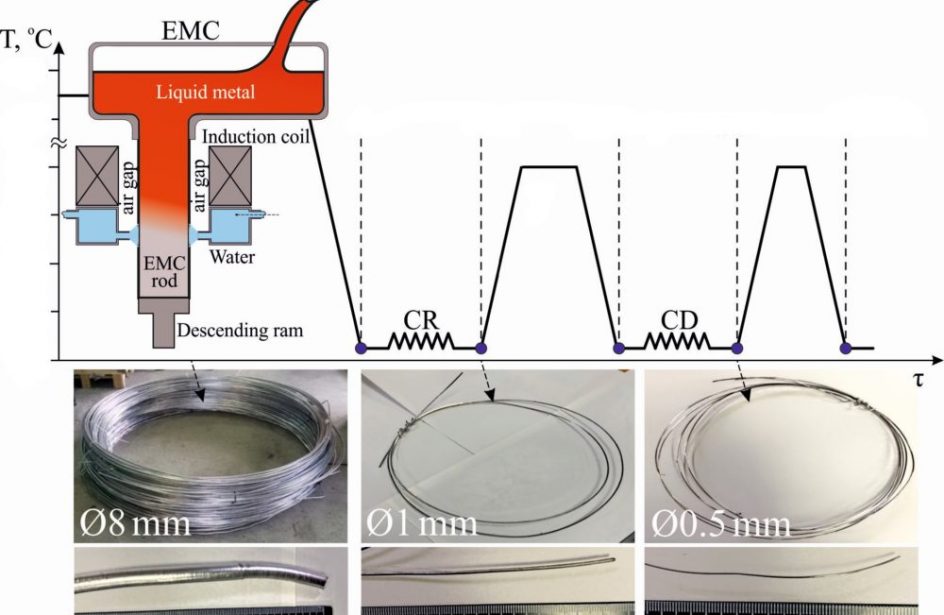 Russian researchers have developed a new process for producing a heat-resistant aluminium alloy that is more durable than comparable alloys.

Researchers from the National University of Science and Technology “MISiS” (NUST MISIS), the Siberian Federal University and the Research and Production Centre of Magnetic Hydrodynamics (Krasnoyarsk) published an article in the Materials Letters academic journal describing the discovery, which they say has the potential to replace heavy copper conductors in the aircraft industry.

The new aluminium alloy is produced in 10 mm billet using an electromagnetic crystalliser. It is thermally stable up to 4000°C, which is up to sixteen times higher than conventional aluminium alloys.

“Before, alloys with such a structure were attempted to be produced using complicated and expensive technology involving ultrafast melt crystallisation, pellet production and subsequent methods of powder metallurgy.”

Key to the production of the new alloy is the ability to produce thermally-stable nanoparticles by joining copper, manganese, and zirconium with elemental aluminium. The process uses annealing and casting techniques that are distinctly different from traditional homogenization and hardening methods.

Torgom Akopyan, senior researcher at NUST MISIS Department of Metal Forming, said his team will be taking the next steps in bringing the new aluminium alloy to the wider public.

“We have been able to produce a high-strength heat-resistant wire from this alloy. We are now determining its physical and mechanical properties, and the first results are already very impressive. We are planning to patent the method of producing this type of wire.”

In addition to aerospace, researchers say the new aluminium alloy could find use in high-speed rail transport sector and the aluminium semis market.