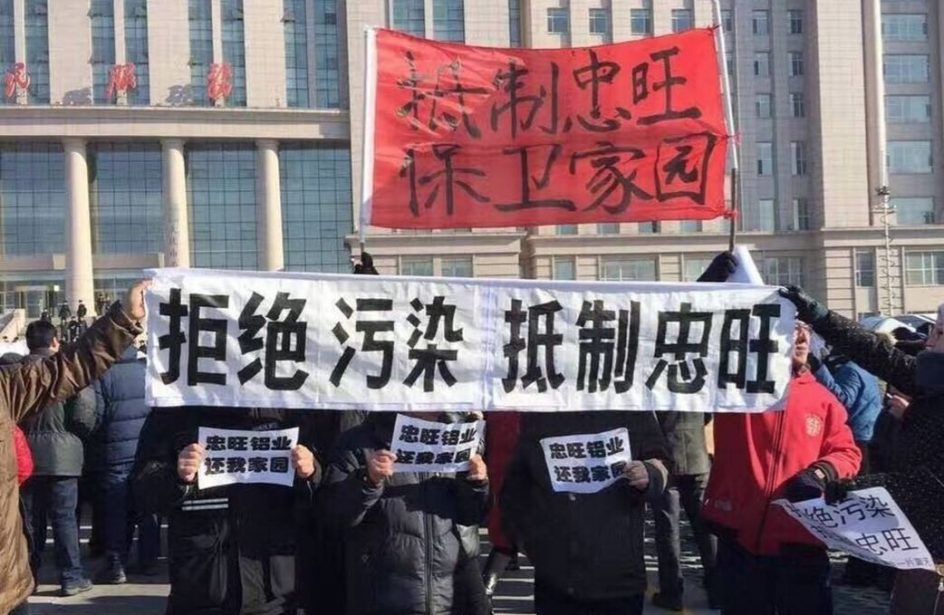 An oil-depressed city in the far northeast of the People’s Republic of China is the site of unrest in recent days as locals have organized in opposition to a massive new aluminium plant to be built by China Zhongwang Holdings. Fearing that the plant would pollute the air and water supply, residents of Daqing turned out en masse to voice their opposition. The epicenter of the resistance was Northeast Petroleum University, where experts previously warned that the plant would cause significant harm to the surrounding area.

Though Zhongwang’s relationship with the government of Liaoning province is quite close as evidenced by favorable tax treatment, it is clear that it does not enjoy the cozy relationship with the government in Daqing. The city in western Heilongjiang province, which boasts a population of almost three million, is known locally as the Oil Capital of China and has long been dominated by China National Petroleum Corporation. Daqing, which translates literally to “Great Celebration,” has been in a substantially less-than-celebratory mood in recent years, thanks to the global drop in oil and coal prices and the depletion of local petroleum deposits.

Sizable protests are out of the ordinary in China, but even so a keen sense of environmental protection has begun to arise in the area, much like it has in many other parts of the country. Official numbers were not available to the press, but estimates of the number of participants ranged between a few hundred up to one thousand. One unnamed source within the city told the Associated Press that the protests began earlier in February.

On the day of the protest, local citizens started a massive social media campaign to share their thoughts and action regarding the project. Many hashtags and discussion group were created on the Weibo and Tianya forums, with one anti-Zhongwang post gathering more than 10 thousands replies. Questions about the plant’s environmental standards had also been raised on Zhihu (the Chinese version of Quora), with hundreds flocking to respond. However, this social media flurry was short lived, as the government cracked down hard on forum pages and took down negative Weibo posts. What’s more, a leaflet was also circulated, listing all the negative effects of the Daqing plant. It was passed around in local communities to recruit people on Wechat groups, urging them to join the protest movement. 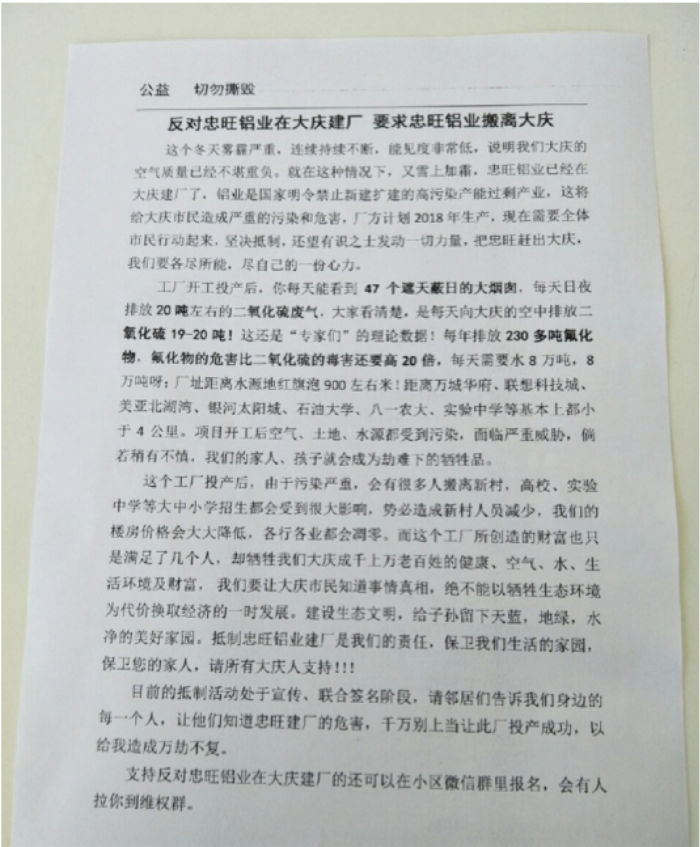 In selling the project to the government, Zhongwang promised in 2011 that the US$6.7 billion plant would provide over 30,000 jobs to the severely depressed region. However, not even the promise of employment could assuage the emotions of locals, leading the city government to announce a temporary suspension of the project and a review of the plan. In the statement, the city promised that a decision on the project would be made “based on a broad consensus of citizens.” Such actions are often undertaken by local governments to quell unrest, then quietly green-lighting the projects months later after the controversy has passed from the public consciousness.

Government officials also promised protesters that the city “absolutely will not start” work on the plant if there’s a risk that pollution might result. However, the city government promised punishment for those who “slandered” Zhongwang as well as for those who “spread rumors or upset society.” For its part, a Zhongwang representative recently told the Financial Times that the project “meets and surpasses all environmental protection standards set by the government.” The representative also referred the newspaper to a statement by the local government that the “hard-won project” would bring badly-needed economic growth to the area.

These protests are just the latest challenged faced by Zhongwang. The firm spent most of last year fending off charges that it was engaged in transshipment in order to avoid tariffs on raw aluminium, answering questions about an aluminium stockpile collected in Mexico and later confiscated by United States Customs officials, and responding to an investigation by the United States Commerce Department regarding aluminium products the government alleges were sold in contravention of federal anti-dumping duties. Representatives of Zhongwang have steadfastly and consistently denied all allegations of wrongdoing since the controversies ensued.