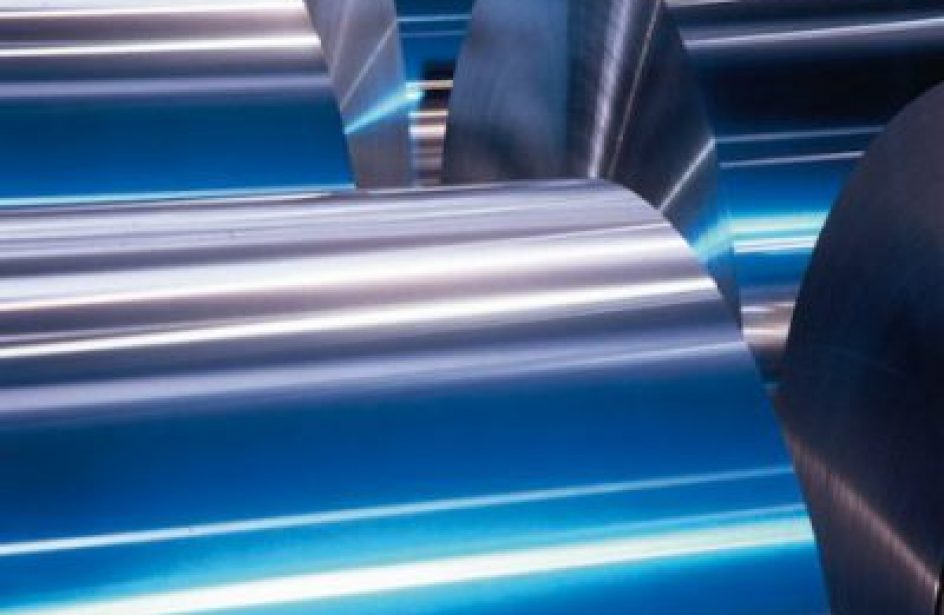 There was a widespread power cut in my area today. During the hours – and hours – that there was no lighting, no hot water, no tea, no TV or internet, I started to think more about our massive reliance on power and indeed how we all take electricity (and gas) – and a reliable, uninterrupted, reasonably priced supply – for granted. Yes, and what about the aluminium industry?

Electrical energy is a major input requirement for the primary production of aluminium worldwide – and for many downstream plants too. An assured supply, at the right price, is equally vital. So, power is a huge factor to consider when planning and locating new aluminium complexes – and running existing ones economically.

The production and processing of aluminium became economically viable only when electricity could be generated on a large scale. Today, electrical power represents about 20 to 40 % of a smelter’s total cost of producing metal. In the USA, primary aluminium production consumes, on a national average, approximately 5 % of the total electricity generated. Although continual progress has been made over the more than 110-year history of aluminium processing to reduce the amount of electricity used, there are currently no viable alternatives to the universal Hall–Héroult process. However, the industry strives to improve energy conservation and over the past two decades, the energy efficiency of the electrolytic reduction process has been improved by around 20 % and electrical energy usage requirements have been cut by some 10% in the more modern smelters. Although power consumption of the newest operations today can be closer to 12,500 kWh per ton of ingot produced, on average, most smelters are using around 14,500-15,000 kWh/ton.

Because of the geographical locations of most aluminium smelting facilities in North America, about 70 % of electricity consumed in primary production has been generated from hydroelectric sources. Now, although this position is likely to change following many smelter closures in the U.S., this renewable source of energy still contributes significantly to the environmental efficiency goals set by the industry. A shortfall is still left however, in the total electricity demanded for aluminium production. The balance is substantively met from the national grid power supply, generated from fossil fuels – natural gas, coal and oil – and nuclear sources, which in 2015 together satisfied the bulk of total US national demand for electricity.

Other aluminium-producing countries have different energy mix profiles depending on economics and resource availabilities. Latest figures (for 2014) from the London-based International Aluminium Institute, seen in the Table below, show the relative consumptions of various energy forms by the main aluminium-producing nations. Looking at the top five, China’s main power source currently is coal supplemented by hydro. The European block today depends on hydro power, nuclear, coal, natural gas and oil in that order, while the GCC countries tap into their rich natural gas resources and some oil. The North American industry relies mostly on hydro power, with the demand balance provided by coal, natural gas, oil and nuclear. The Asian countries’ (excluding China) production is powered predominantly by coal and some supplemental hydro. 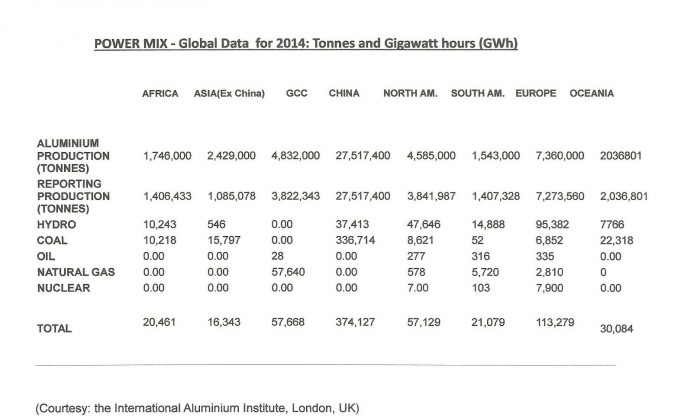 With a clear focus on energy issues, the North American Aluminum Association stresses that the industry it serves urgently needs and firmly proposes a federal and state energy policy that: strongly promotes energy efficiency and recycling; provides for a stable and predictably priced electricity supply; supports more intensive shale gas exploration; recognizes voluntary actions to reduce greenhouse gas emissions (GHGs), and – overall – protects a vibrant manufacturing base. These actions can only be realized through sensible legislation and regulation resulting from a considered energy policy.

The industry will continue to support the U.S. Department of Energy’s efforts to make advances in energy efficiency in other manufacturing sectors, having enjoyed a long history of successful partnerships with federal regulators, the DoE in particular. The industry looks to continue these partnerships to further advance domestic energy competitiveness.

The United States has a wealth of natural gas reserves, the AA points out, and the current boom in shale gas supply has been a driving force for the manufacturing renaissance. Low energy prices driven by this trend are helping manufacturers stay in business. Electricity is the largest feedstock in aluminium production, so low energy prices are especially important to keep aluminium industry jobs in the U.S. The window of opportunity to capitalize on the natural gas advantage is small – and available right now: and the aluminium industry believes federal policy should be focused on maximizing and exploiting the nation’s natural resource benefit for U.S. manufacturers and producers.

Since the early 1990s, the aluminium industry in the US has continued to make voluntary efforts to address climate change policy issues and increase its energy efficiency through redduction in emissions: Since 1992, emission cuts of 62% in GHGs and 85% in per fluorocarbon (PFC) have been registered. Recognizing the domestic sector’s efforts and prominent performance, in 2001 the U.S. Environmental Protection Agency granted the aluminium industry an award for Climate Change Protection.

Energy efficiency and recycling are intrinsically linked, the AA indicates: Increased recycling of aluminium is one major route to further boost energy efficiency. Secondary metal production saves more than 90 % of the energy required to produce the same amount of primary aluminium. So, it is logical that energy savings from recycling aluminium should be considered when developing future energy policy, which should include incentives for even greater recycling efforts alongside promotion of energy efficiency overall.

Energy policies that do not properly consider the position and context of energy-intensive industries like aluminium, and that negatively impact energy costs, will put domestic industries at a disadvantage compared with their foreign counterparts. The aluminium industry is dedicated to working with federal policy makers to formulate common sense legislation and regulation to address energy issues while protecting a vibrant manufacturing base.

Meanwhile at home, the power was restored some hours later – no great harm done. Some smelters though, still under scrutiny to assess their long term viability, might not fare so well. For them, the lights could well be turned off indefinitely.