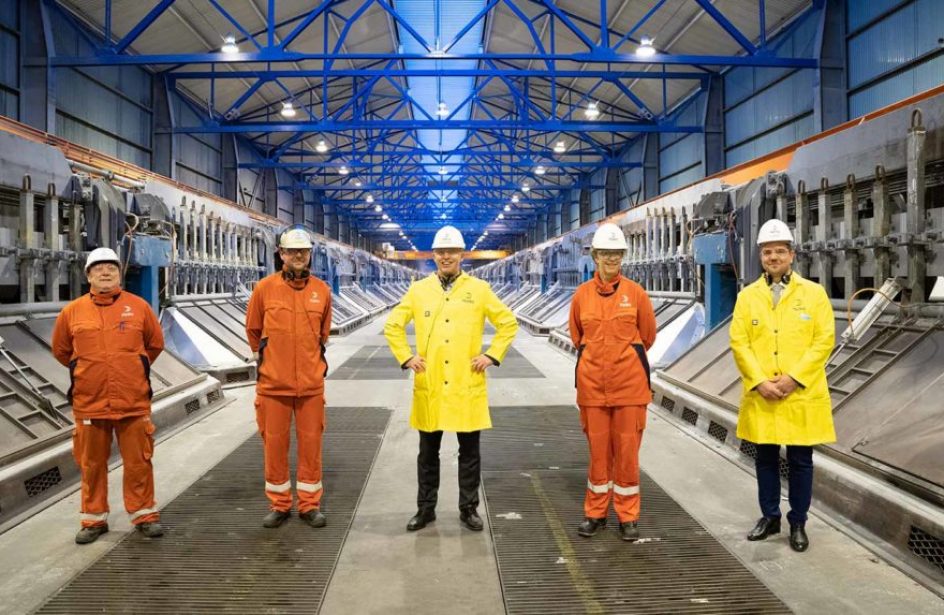 Norsk Hydro ASA’s Husnes aluminium smelter reached full capacity this week, more than a decade since the plant last ran at its nameplate capacity of 195 thousand metric tons per annum.

Dignitaries and officials from Hydro and the nearby municipality of Kvinnherad were on hand to mark the occasion. The plant has run at partial capacity since 2009 when capacity was cut in response to the global economic downturn then occurring.

Norsk Hydro’s CEO Hilde Merete Aasheim remarked to employees at the event that the reopening of the second potline was an important step for several reasons.

“I have been looking forward to this. Finally, production is back in full swing at Hydro Husnes. Hydropower-based primary aluminum with a world-leading low-carbon footprint is produced here – you should be proud of that.”

“It looked gloomy for a while. But the introduction of CO2 compensation in the EU and Norway made it possible to enter into new, market-based power contracts that ensured further operations and new investments. It shows how crucial the basic framework conditions are for the export industry in global competition, and it is important that they are predictable also in the future – that makes the difference between sunset industry and industrial development,” continued Aasheim.

Hydro began the work of restarting the Husnes plant in 2017 when it invested NOK1.5 billion in upgrades to the 200 electrolysis cells on the shuttered line.

“This has been a long journey,” commented local union president Frode Alfheim. “From closing down to framework conditions falling into place and now that Hydro Husnes is back in full operation. It was great to enter a warm production hall full of activity. Congratulations to Hydro Husnes.”

In conjunction with the reopening of the second line, Hydro teamed up with urban furniture manufacturer Vestre to donate new, sustainably-produced outdoor furniture to the local community. The furniture is made in part with Hydro CIRCAL, the plant’s low-carbon recycled aluminium brand.