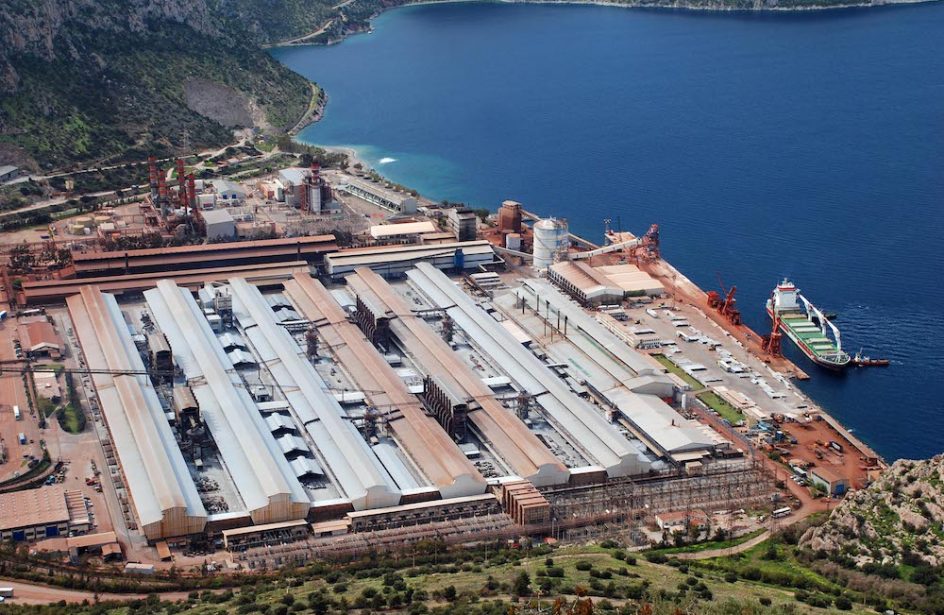 In the Balkan region, there are currently five operational smelters producing some 610,000 tonnes of primary aluminium a year, with total capacity of 672,000 tonnes/year. However, production has decreased by over 180,000 tonnes in 2015, compared to 2006. Today, there are just over 6000 workers employed compared to over 10,000 people in 2004 and over 7,500 in 2006. Most of the production (over 80%) is exported to the European Union, with the rest going to other regional locations, for example, Turkey, Georgia and some other countries in Asia. 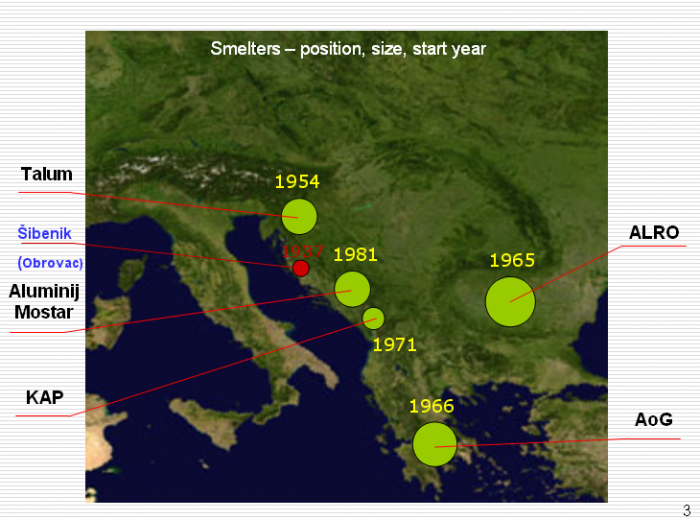 Today only Alro has downstream production, compared to the 1980-s when it had been only KAP and TLM Šibenik (electrolyses closed in 1991).

The latest smelter built in the region is Aluminij Mostar, Bosnia & Herzegovina, starting production in 1981.The oldest is Slovenia’s Talum Kidričevo, which commenced production in 1954.

Below are some key characteristics and latest developments for each smelter: 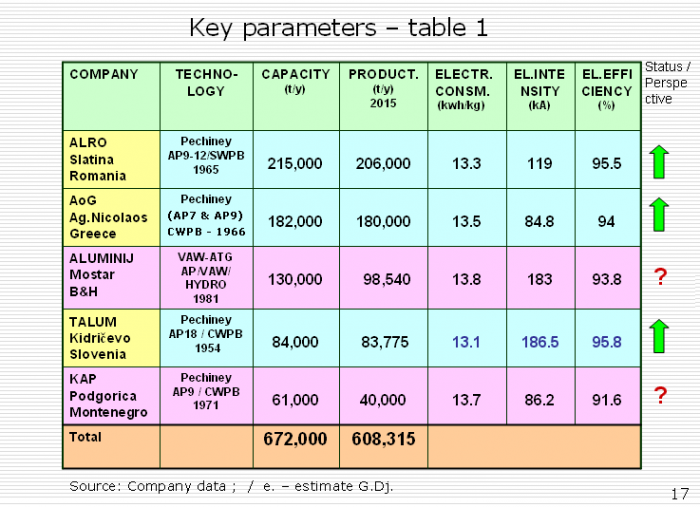 For 2016, Alro S.A. has an investment budget of over USD 53 million, focused on increasing energy and equipment efficiency, expanding the portfolio, and increasing competitiveness and product quality. The investment programme for 2016 includes the increase of scrap processing capacity of Eco Cast House, in order to reach a capacity of 90,000 tonnes per year. In addition, the company invests in increasing the energy efficiency of the existing processes.

Alro recently signed an aluminium supply deal with Airbus. The agreement is for a multi year period, starting 2017. Under the terms of the contract, Alro will supply aluminium flat rolled products for aircraft manufacturing.

The main markets for the aluminium manufactured by Alro are within the European Union (Germany, Hungary, Poland, Greece and Romania). Alro also exports to the US and Asia.

Aluminium of Greece (part of Mytilineos Group) started with a large scale cost saving programme called ”Mellon” (Future) in 2011 and achieved € 110 million in cost savings by 2014. The company remained focused on optimisation of its cost structure through the implementation of its ongoing ”Excellence” programme, expecting a further € 170 million in savings by the end of 2016 and thus significantly improving its position on the production cost curve and absorbing the pressure from low aluminium prices.

The “Excellence” programme is aimed at generating additional savings of US$ 150-200 per tonne of aluminium produced by end of 2016 in order to position AoG in the first quartile cost curve, which is at US$ 1500/tonne and below.

Aside from the “Excellence” programme, falling production costs are the result of favourable Euro/Dollar exchange rate and lower natural gas prices, resulting in lower electricity prices from the cogeneration gas power plant.

For the first half of 2016, Aluminium of Greece (the company’s Metallurgy & Mining sector, comprising results of electrolyses, alumina refinery and a gas power plant), posted a turnover of €224.3 million, below €297.7 million in 2015. Earnings before interest, tax, depreciation and amortisation (EBITDA) stood at €37.0 million, down from €65.4 million for the same period in 2015.

The federal government of Bosnia and Herzegovina had previously announced that it would be selling its stake in Aluminij d.d. Mostar by the end of the year, as part of a privatisation initiative involving five other companies. It would be the second attempt by the Bosnian government to sell Aluminij after it halted the privatisation process launched in 2007, despite a high level of interest among international companies. In comparison to the first attempt, when the Aluminij smelter had brand new, upgraded technology and a modern cast house and anodes plant, this time around it is in a much worse position. However, according to the latest news, the federal government has agreed with the local, Croat led government, to delay the sale of Aluminij Mostar for one year.

The company is 44% owned by the federal government, while the other 44% is in the possession of small shareholders (existing and former workers of Aluminij). The remaining 12% is owned by the Croatian government, which invested in restarting production at Aluminij after the war.

Employing some 850 workers, Aluminij’s exports are worth over €150 million /year, with its main buyers being Glencore and TLM Šibenik. However, due to high electricity costs (€ 51.5 /MWh in 2015, € 42 /MWh now) and unfavourable aluminium prices, Aluminij has recorded a permanent loss in recent years (€ 22 million net loss in 2015, and around net loss of around €25 million in 2014).

Regardless of future ownership, the future of Aluminij Mostar largely depends on substantially higher LME aluminium prices, a much lower electricity price (it recently signed a half-year electricity supply contract with Elektroprivreda BiH at a lower price) and the continued and substantial support by the federal government or its new future owner.

Talum is majority owned by ELES, the Slovenian public electricity distributor (83.44%). Despite that, it still pays the highest price for electricity out of all the Balkan smelters (€ 47 MWh). However, it also has the lowest consumption of electricity in the region, with 13,100 KWh / tonne.

Around 80% of Talum’s production is exported, mainly to European Union markets. Among others, some of Talum’s main customers are Mercedes (housings for Diesel pumps), Porsche (motor parts) and Bosch (heat exchangers).

Talum consumes around 1.2 billion KWh/year of electricity. The company recently managed to purchase electricity needed for production for the period of 2016 to 2018 at a lower price than it currently pays, largely due to favourable conditions in the electricity market (accordingly from Austria).

Over three years since bankruptcy and two years since being acquired by its new owner, Kombinat Aluminijuma Podgorica is still going through the bankruptcy procedure, without any major capital investments. Recently, two arbitrage procedures at an international court in Paris were concluded in favour of KAP over its former owner, and several new court procedures by the former owner have been announced.

The new owner recently announced the start of production of three new production facilities in 2017, mentioning billets and “downstream products.” Currently, KAP’s only product is T-ingots.

The government has been firmly determined to keep KAP operating, despite suggestions by some internationally renowned institutions (World Bank and IMF) to close KAP (before the latest privatisation). According to the deputy prime minister, a few years ago the government’s total expenses for KAP (including subsidies, bank guarantees paid etc),during the period 2006 – 2013, were over € 500 million.

Officially today there are no subsidies or any other support by the government to KAP and its new owner.

It is unclear why previously the government did not find a partner to invest in a hydro power plant or other energy source for KAP, as it was so keen to avoid closing KAP. 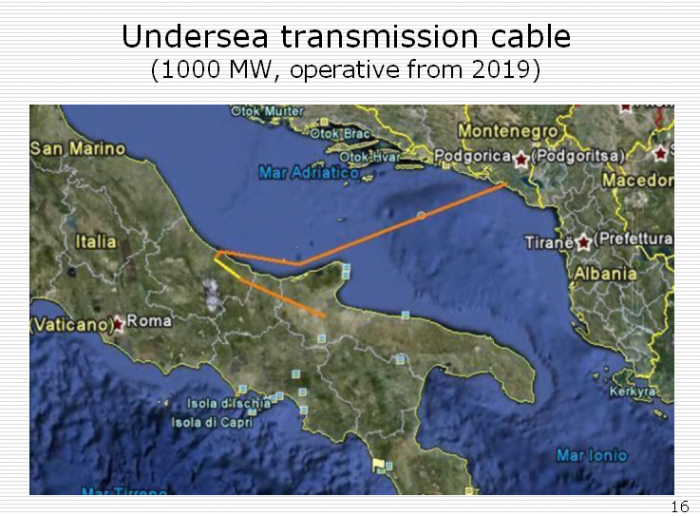 A 775-million-euro cable, connecting Italy and Montenegro, will run for 390km under the Adriatic Sea while an additional 25km will be on shore. A high-voltage electric interconnection, 1000 MW /500 KV is supposed to connect Montenegro with Italy by 2019 with the aim of enabling Montenegro to export energy from renewable sources to Italy.

In 2011 Serbia signed an agreement with Italy to export its own hydro-electricity through the cable.

The investor is Italian company Terna, which has also declared an interest in laying another undersea cable which will connect Italy with Croatia and Albania.

The cable represents a potential risk for regional smelters since all surplus of electricity will be exported to Italy at substantially higher prices.

There is no immediate threat of closure of any smelter in the region. KAP and Aluminij Mostar are in danger if aluminium prices remain low but governments will most likely not allow closure in near future. The Aluminij Mostar sale is also uncertain. Strategies are focused on increasing energy efficiency and decreasing electricity consumption, reduction of production costs, investments in downstream and recycling facilities in future.

Examples of other privatisations of smelters in South East Europe:

Marco International Inc. bought a majority stake in Alro Slatina (Romania) in 2002 for US$ 72.91 million. Today Alro is subsidiary of Vimetco N.V., a global, vertically-integrated primary and processed aluminium producer. The company claims investments of about US$ 550 million in the past eleven years.

The Greek company Mytilineos Holdings SA took over Aluminium of Greece from Alcan in 2005 for € 79.5 million, with over € 200 million investments in a co-generation gas power plant.

The Russian EN+ Group, through its offshore company Salamon Enterprises Ltd. registered in Cyprus, bought Montenegrin Kombinat Aluminijuma Podgorica (KAP) in December 2005 for € 48.5 million in cash, obligation of € 75 million of investment during a five year period and US$ 27 million for a social programme paid to the Government. KAP went bankrupt in June 2013 after the Montenegrin government took back the ownership.

The only company in the region now still remaining in the government’s ownership is Talum d.d. Kidričevo (Slovenia), owned by the electricity supplier Eles.