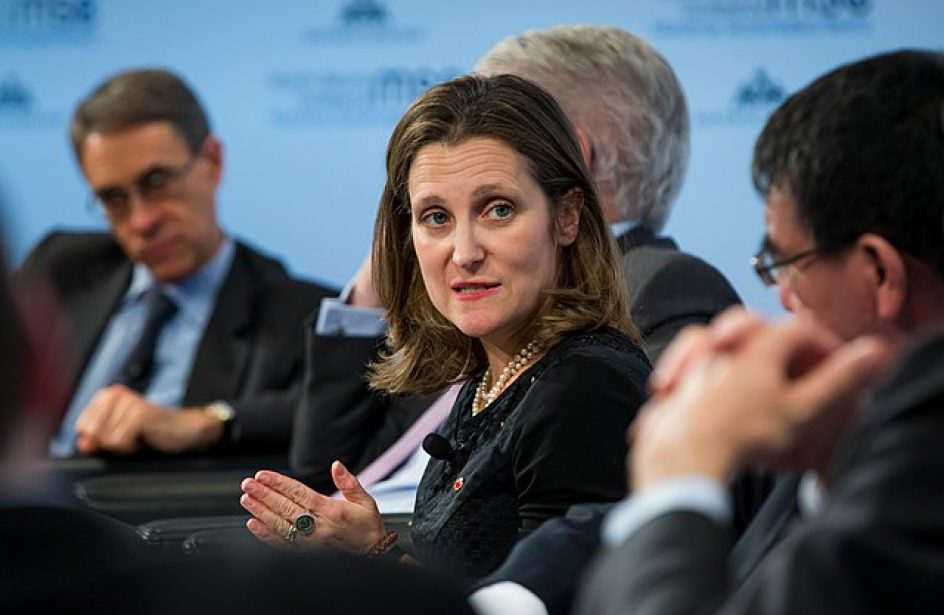 In the course of a discussion with the United States Speaker of the House Nancy Pelosi (D-CA), Canada’s Foreign Affairs Minister Chrystia Freeland lobbied for the end of the Trump Administration’s Section 232 tariffs on aluminium and steel, citing the harm endured by both sides on account of the measure.

Though the dominion’s government is intensely focused upon ratifying the U.S.-Mexico-Canada (USMCA), Freeland assured Pelosi that it continues to be opposed to the Section 232 tariffs.

“We spoke a lot about the [Section] 232 steel and aluminum tariffs and I explained why Canada is so strongly opposed to them and why Canada believes they must be lifted,” explained Freeland to reporters in a conference call on Saturday.

During the discussion between the two at the Munich Security Conference in Germany last week, Freeland also raised the issue of retaliatory measures carried out by her own government, “and heard that that is indeed having an impact.”

In addition to her conversation with Pelosi, Freeland related a similar discussion earlier in the month with U.S. Senate Finance Committee chair Sen. Chuck Grassley (R-IA) on the same topic.

“I explained to the senator how important it is for Canada for those tariffs to be listed,” explained Freeland. She continued by telling Grassley that the Trump Administration’s national security rationale for the blanket tariffs on aluminium and steel are “specious and absurd.”

“The Canadian position is that now that we have concluded our trade negotiations with the United States, that is all the more reason why these tariffs ought to be lifted,” she opined.

The Section 232 tariffs, which have been in place for nearly a year, have been intensely unpopular with governments around the world. Though Canada initially received a temporary exemption from the measure, the dominion’s smelters fell victim to the tariffs after the exemption expired. Since then Ottawa has taken action against the tariffs both at the WTO and by implementing its own retaliatory measures