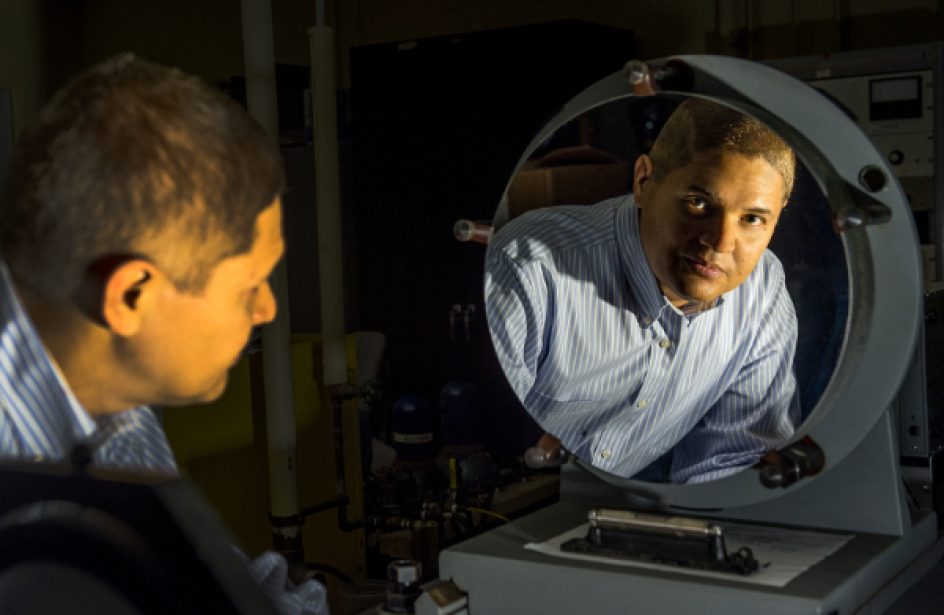 Principal Investigator Manuel Quijada is shown here with the type of optic he and his team would coat with a fluoride film to provide maximum reflectance over a wide spectral range. Source: NASA

The Maryland-based team is working in laboratories in NASA’s Goddard Space Flight Center to develop successor technology for the James Webb Space Telescope and Wide Field Infrared Survey Telescope. The team, headed up by NASA’s Research Physicist Manuel Quijada, Ph.D., is developing the mirrors to reflect even more of the infrared, optical, and far-ultraviolet wavelength bands in order to deploy telescopes for studying further such astrophysics questions as the epoch of reionization, galaxy formation and evolution, and star and planet formation among many other questions.

According to Quijada, the key is to develop materials and techniques for coating aluminium mirrors in order to prevent oxidation, which robs the mirrors of reflectivity.

“Aluminum is a metal that nature has given us the broadest spectral coverage,” Quijada explained “However, aluminum needs to be protected from naturally occurring oxides with a thin film or substrate of transparent material.”

Of particular interest is developing mirrors that reflect well in the 90- to 130-nanometer range. This range, known in the business as the Lyman-alpha (Ly-α), was discovered by a Harvard physicist by that name in 1906 and is the electromagnetic energy given off by hydrogen atoms when their lone electron drops to the lowest orbital. The energy given off in the Lyman-alpha portion of the spectrum is useful for pursuits like habitable-planet hunting, but it is unfortunately readily absorbed by oxygen in the Earth’s atmosphere.

“The low reflectivity of coatings in this range is one of the biggest constraints in far-ultraviolet telescope and spectrograph design,” lamented Quijada.

“Traditional coating processes have not allowed the use of aluminum mirrors to their full potential,” Quijada said. “The new coatings we’re investigating would enable a telescope covering a very broad spectral range, from the far ultraviolet to the near-infrared in one single observatory. NASA would get more bang for the buck.”

Quijada is building upon the successes his team achieved last year in a higher region of the ultraviolet segment – according to a validation test conducted on it, the magnesium fluoride- and lithium fluoride-coated aluminium mirrors reflected ninety percent of the ultraviolet waves directed at it. These coated-aluminium mirrors have opened up a new frontier in heliophysics, providing the types of mirrors necessary in studying the relationship between the Earth’s ionosphere and solar winds. Two new projects, namely the Ionospheric Connection Explorer (ICON) and the Global-scale Observations of the Limb and Disk (GOLD), will do just that when they are launched later this year.

“We need to push further down in the ultraviolet spectrum,” Quijada opined. “We need to get access to the whole ultraviolet to infrared range. We are blazing a trail in mirror coatings.”