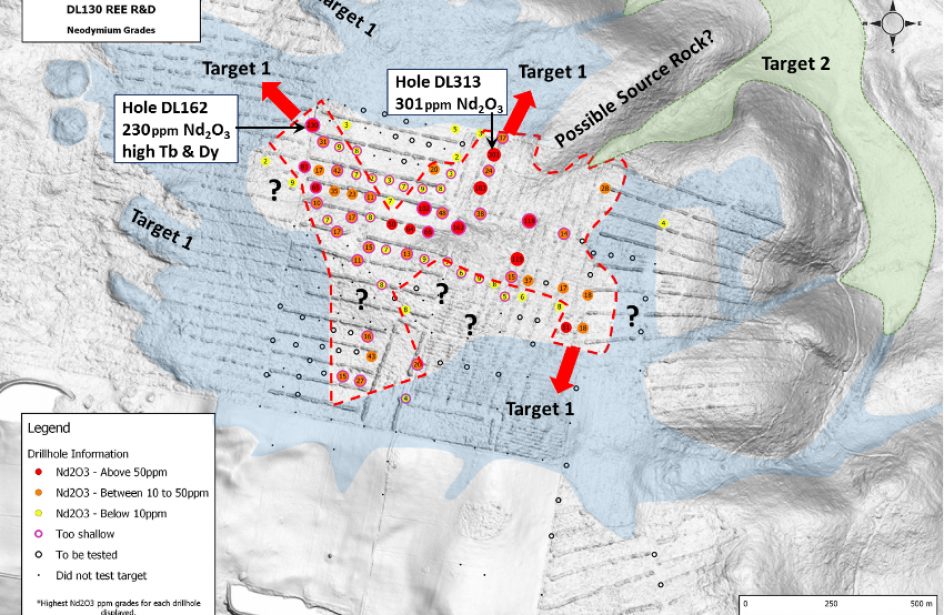 Neodymium grades in drillholes at DL130 plotted on a topographic image. Nd2O3 targets now identified to the northeast, northwest and south. Target 1 (blue) is in clay zones on the plateau. Target 2 (green) is interpreted to be in valley sediments. Source: ABx

Australian Bauxite Limited (ABx) announced yesterday a significant new increase in the size of its rare earth reserves at its DL130 bauxite-REE project in northern Tasmania.

ABx says new assay results show greater concentrations in the immediate area of high-priced REE elements like Neodymium, Praseodymium, Terbium, and Dysprosium. The findings show that the deposits are zoned, which will influence the way ABx conducts testing going forward.

The firm says that the REE found at DL130 can be used in a wide variety of applications across several areas, including for super magnets, electric vehicles, military systems, wind turbines, and smart phones, among others.

ABx exploration manager Paul Glover said in a press release that much work remained at the site before the firm has a full picture of the mineral assets at DL130.

“This discovery is starting to take shape but we are still at an early discovery stage. The latest set of results confirmed that this prospect is open in several directions and also showed that some early drill holes did not test the REE enriched horizon and need to be redrilled carefully to evaluate the clay-rich zones that are sitting on the basement bedrock. The prospect is now recognised to be untested to the south and this potential will be drilled in due course. Most importantly, the latest results also showed that the mineralised zone is increasing in grade and thickness to the northwest where there is a large tract of untested ground that has the right geology to be prospective. This has been exciting new information.”

“ABx is assessing the value of a geophysical program to map the subsurface channels that may be carrying high grade rare earth elements,” he continued. “There is also potential for the REE-rich clay horizon to outcrop on slopes around the edge of this plateau and this could be revealed by a shallow geophysical survey. Because the REE occurs in clays and are soluble, the mineralisation appears likely to be Ionic Adsorption Clay deposits (“IAC”) which have been a major source of low-cost REE production in southern China. We are designing a bulk sampling program to allow metallurgical tests to confirm the deposit type and to design the best way to produce a bulk REE concentrate from this mineralisation.”