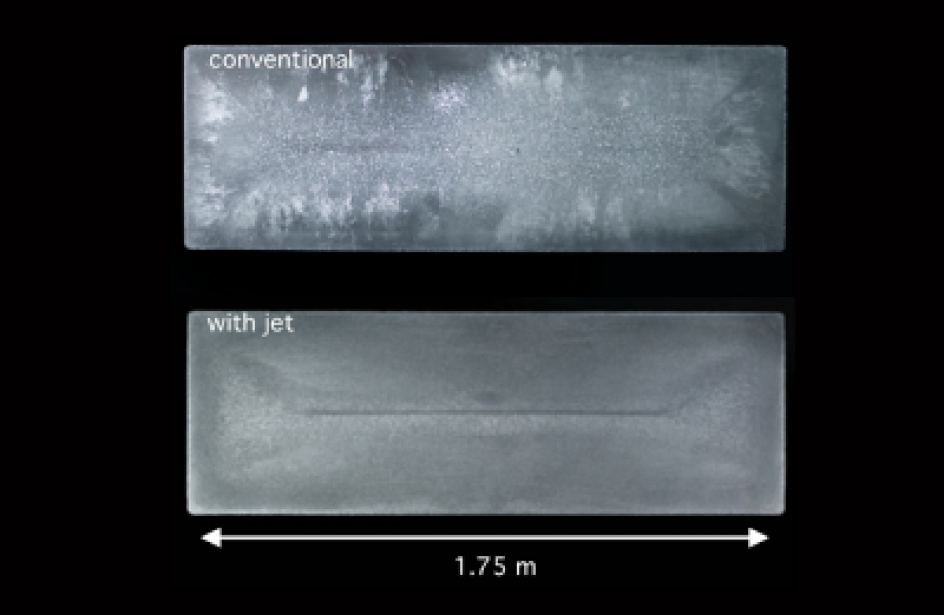 Researchers at the Massachusetts Institute of Technology (MIT) say they have developed a method of casting aluminium in a more uniform manner. Such an improvement would lead to significant gains in the casting’s strength and reliability.

In order to produce industrial aluminium slabs, small amounts of manganese and copper are mixed in with the molten aluminium and rapidly cooled in a process known as direct-chill casting. The process does not always lead to a uniform casting, causing weak points that sometimes render the piece useless.

Over the past three years MIT assistant professor of metallurgy Antoine Allanore and his student, doctoral candidate Samuel R. Wagstaff, have developed a method that uses a turbulent jet that reduces the unevenness by up to one fifth. Along the way they determined the “macrosegregation index,” which is a comparison between the ideal chemical makeup and the actual chemical makeup of a certain piece.

“We have now tested the technology all along the supply chain, and we did confirm that the 20 percent improvement in macrosegregation index was good enough to allow further increase in productivity,” explained Allanore.

The duo’s findings, which are the subject of three scholarly works, was conducted in conjunction with Novelis and carried out at Novelis Solatens Technology Center in Spokane, Washington.

According to the researchers, macrosegregation, which are areas of uneven distribution of alloying elements, can often be significant portions of a casting. This can lead to scaling, cracking, or even failure of the part.

“Analyzing the structure, and in particular the presence of solid grains, formed as the aluminum alloy turns from liquid to solid is difficult because you cannot see through aluminum, and the material is rapidly cooled from 700 degrees Celsius (1,292 degrees Fahrenheit), and differently sized grains are moving as the aluminum solidifies at the rate of about 2 to 3 inches per minute,” said Allanore. These areas tend to be near the center of the part, he explained.

“It’s a very perverse situation in the sense that from the outside the solid slab could look very nice, ready to go to the next treatment, and it’s only later on that you discover that there was this defect in a section, or in an area, which basically means a huge loss of productivity for the entire supply chain,” said Allanore.

“In our experiments, we did some specific tests at full scale to quench, so to basically sample the molten metal as it’s cast, and we’ve seen grains anywhere between 10 microns up to 50 microns, and those grains are, according to our development, the ones responsible for macrosegregation,” Allanore says.

In order to prevent this, the researchers developed a jet stream to keep the grains circulating as it hardens rather than pooling in the middle of the casting.

“It’s like a hose of water in a swimming pool,” he said. “From a purely fluid mechanics perspective, the mixture is homogeneous. It’s just a full, complete mixture of the alloying elements and aluminum.”

“The introduction of the jet induced a completely different recirculation of the grains and therefore you get different microstructure, all along the section. It’s not just on the edges or not just in the center, it’s really across the entire section,” Allanore says.

This new process could have significant ramifications for alloys and castings used in the aerospace industry.

“The problem you have with aircraft-grade or aerospace-grade plate is you have very significant macrosegregation regions in the center of that plate, so you have drastic drops in mechanical properties in the very center,” Wagstaff explained. “Our research started with the idea we want to be able to stop macrosegregation.”