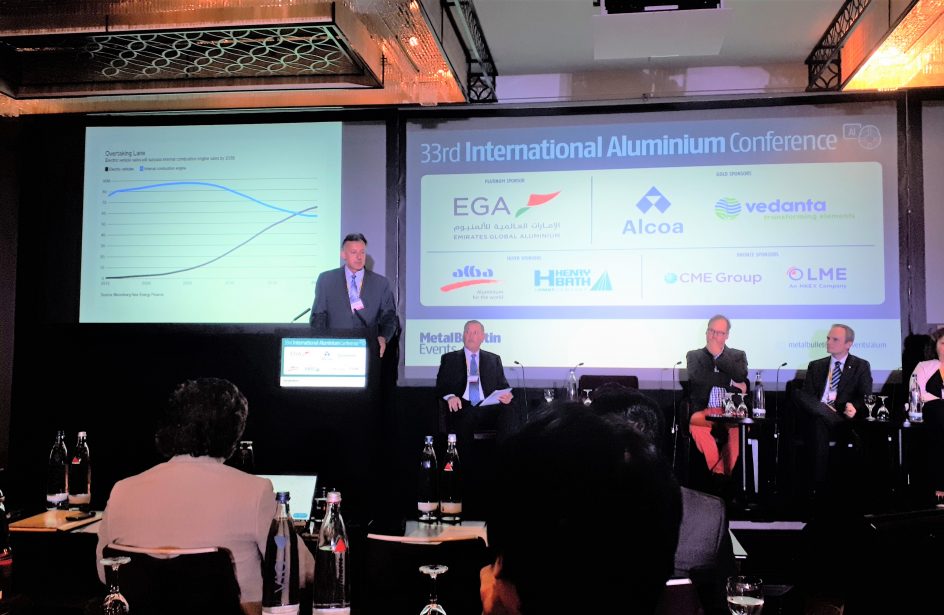 The 33rd Metal Bulletin aluminium conference took place at the Berlin Hilton hotel in the German capital, between September 12-14. The main topics discussed at the conference, both at executive panels and during the lunch and coffee breaks, were the sanctions on UC Rusal and the US –China trade war, both seen as major sources of concern for aluminium markets. Speakers agreed that there is an increased amount of uncertainty, but expressed hopes that tensions would simmer down and be eventually resolved during 2019. Unlike previous MB conferences, UC Rusal representatives were notably absent among speakers and delegates.

More than half the delegates polled during panel discussions at the conference (by using an anonymous online application) thought that the sanctions on Rusal would be lifted some time in 2019. According to traders, this outcome will affect premiums in Europe, which would fall if sanctions are lifted, or increase if they stay in place. Your analyst partially agrees, but argued that other factors and macroeconomic developments will influence aluminium premiums as well. A second poll showed delegates were tightly split (highly divided) between those who expect the trade wars to escalate and those who see their resolution on the horizon.

The high cost of raw materials was another hot talking point at the conference, with the tightness in the alumina industry worrying many smelters. However, analysts expect alumina prices to fall by end of the year, as Alunorte capacity ramps up soon.

During the Keynote executive panel, titled “The future of global aluminium industry”, Dick Evans, Chairman of Board at Constellium said that:

Tim Reyes, President of Alcoa Aluminum, agreed that methods other than tariffs would be preferred to solve China’s overcapacity issues, especially when it comes to trading with Canada. Panellists agreed that Section 232 tariffs have had little effect on Chinese supplies. In the short term, Alcoa sees benefits on the premium side, and has restarted several lines in its U.S. smelters.

Asked directly about the potential lifting of UC Rusal sanctions, panellists agreed that it may depend on the result of the November midterms in U.S, but were unsure about the timeframe.

Cao Yang, metals analyst at Metal Bulletin, discussed the status of the Chinese aluminium industry. He provided a retrospective of aluminium prices in recent years, explaining the influence of China’s environmental policy and US Treasury sanctions on UC Rusal and Section 232 tariffs on the aluminium price. Overcapacity was the main reason dragging the metal price down between 2012 and 2016. The fact that the price this year hovered above US$ 2000 / tonne, after falling from over US$ 2700 /tonne in April, is however, a sign that capacity is limited.

The gap between demand in China and aluminium production capacity is about 10 million tonnes, in favour of capacity. Consumption of the metal has been rapidly growing in automobiles and electric vehicles. Even in railroad applications, aluminium has been stealing market share from copper and steel. However, Chinese demand is actually lower than initially forecast.

Exact production figures are hard to come by, as the numbers published by NBS (China’s national bureau of statistics) and Antaike (a research agency) are quite different, since NBS does not report illegal production levels.

Chinese producers have invested considerably to implement the latest technologies and also to comply with new strict environmental rules. The rising production capacity in China has also resulted in tightness in supply for raw materials, such as bauxite, alumina, pet coke and anodes. Even if imports of alumina have decreased due to rising domestic production, China still bought 3 million tonnes in 2017 from third countries.

All things considered, 2018 is shaping up to be an inflection point, resulting in decreases of Chinese exports, due to trade barriers and the saturation of Asian markets, as the main destination for Chinese aluminium exports. Metal Bulletin expects an average aluminium price of US$ 2200/tone in 2019.

Robin Bhar, Head of metals research at Société Générale CIB, said that the bank’s base case (or central) scenario is pretty positive on the supply/demand dynamics in favour for the aluminium price. The scenario assumes a 60% probability that U.S. sanctions on UC Rusal will be lifted, and that there will be exemptions from Section 232 tariffs extended to the EU/Canada. Without these turbulences, Bhar estimates that the industry needs to boost supply in the next 2-3 years, because demand is very healthy and is only going to continue picking up. At the same time, there is cost inflation in producing aluminium and the cost curve is moving up due to input headwinds. 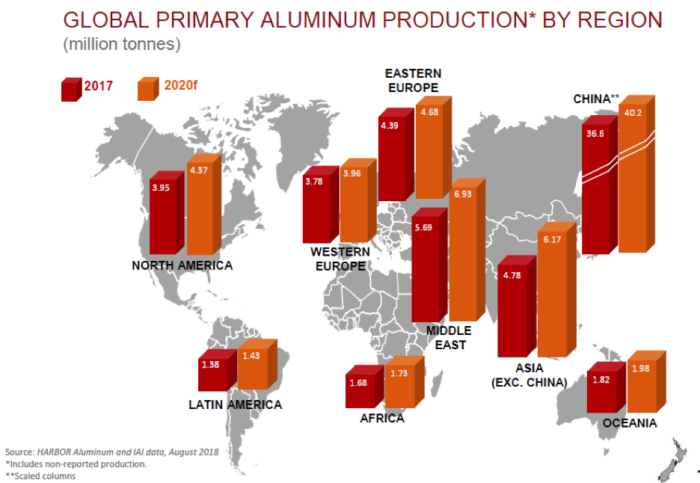 As a result, the bank is relatively bullish towards aluminium: the average price in 2018 is forecast at US$ 2150 /tonne before gradually, steadily increasing, trading between US$ 2300 – 2400 /tonne as an average by 2023. There is a 25%, fairly low probability, that UC Rusal sanctions remain in place little longer than initially thought, as well as a 25% probability for trade wars escalating, and turning the markets back to the recession.Still, Société Générale is very positive on its base case scenario.

Commenting on November’s midterms in the U.S., Bhar stated that markets would react positively to Democrats wining the Senate, as they are unfavourable towards trade tariffs. This would yield a more bullish outlook than the base case scenario. Nobody wins trade wars, and there is no reason to go back to 1990s levels, when tariffs were against free trade. There are hopes that the EU, U.S. and China will sit down at the negotiating table and resolve the impasse.

Before the UC Rusal sanctions were enacted, Société Générale expected an average aluminium price of US$ 2200 / tonne in 2018, due to positive supply/demand and falling aluminium stocks. However, in the next 5-10 years, the growth in smelter capacity will not come from China, as it was the case in the past, so the growth has to come ex-China. Higher aluminium prices will therefore be key to increasing production capacity.

Bhar concluded by saying that we are going to see a small contango in the forward curve, tightening of the supply /demand balance and eventfully the market moving into the deficit, which should be reflected in a flattened forward curve. The cost pressure is providing the floor and LME prices can’t remain too long at around US$ 2000 /t, so the level must go up.

In the end user panel, Egil Hogna, Executive Vice President, Extruded Solutions at Norsk Hydro ASA, mentioned that offshore structures for fish farming are experiencing high demand, in Norway, Canada and elsewhere. Since weight is a challenge in installing them, aluminium has a chance to benefit this segment in the future. But that is not their main benefit – offshore maintenance of steel is very expensive and potentialy dangerous. As Hogna said, “Steel is needed to be painted often and you have expensive transport by helicopter. In the open waters, the structures need to be stronger and can be larger. Steel structures can not be mainteined and painted with the fish in the structure, and farms have to be temporarily closed.So there is a downtime in the production if there are steel structures.This is where aluminium has a clear productivity benefit.”

This shift is important as, according to estimates, by 2030, Norway’s turnover from fish farming will surpass turnover from oil and gas industry, making it the fastest growing industrial sector in the country at the moment. Hogna added that 75R, Hydro’s newest alloy for the building and constructions market, contains 75% of scrap (recycled aluminium), meaning its production saves the energy and reduces CO2 emissions.

In the same panel, this analyst spoke about aluminium use in electric vehicles (EVs). Sales of EVs are growing rapidly, with an exponential growth curve, reaching around 2.1 or 2.2 million EVs in 2018, according to the latest data and sales trend forecast. This would represent around 2.2% of total global light vehicles sales and around 58 % sales increase y/y. The numbers only refer to plug-in hybrid electric vehicles (PHEVs) and battery electric vehicles (BEVs) – if mild hybrid EVs (48 volts) and all other kind of mild and full hybrid EVs are added, the number would exceed 6 million EVs sold in 2018.

The world’s biggest economies (China, the U.S. and Europe) will lead demand for battery powered cars over the next two decades, and have already made the most headway in providing subsidies and installing charging points. China is expected to continue to be the largest EV market in the world through 2040. Demand for aluminium in EVs in 2030 will increase to 10 million tonnes /year, against projected sales of 40-42 million EVs in 2030 (according to CRU). According to the Ducker Worldwide, 47 % of lightweight materials used in next 10 years will be aluminium.

Demand for aluminium will also rise on account of infrastructure for serving EVs, since aluminium is commonly used as housing material for EV charging stations. Building battery plants and new EV assembly plants will, aside of steel, also require aluminium extrusions. Most experts think that consumers would not jump straight to mass adoption of BEVs, with plug-in hybrid electric vehicles (PHEV) presenting a competitive intermediate offering for the next few years. MHEV (48 V) will probably lead the market for EV until 2030.

The 34th Metal Bulletin aluminium conference in September 2019 will be held in Athens, Greece, delegates of the conference decided by using an anonymous online voting application.