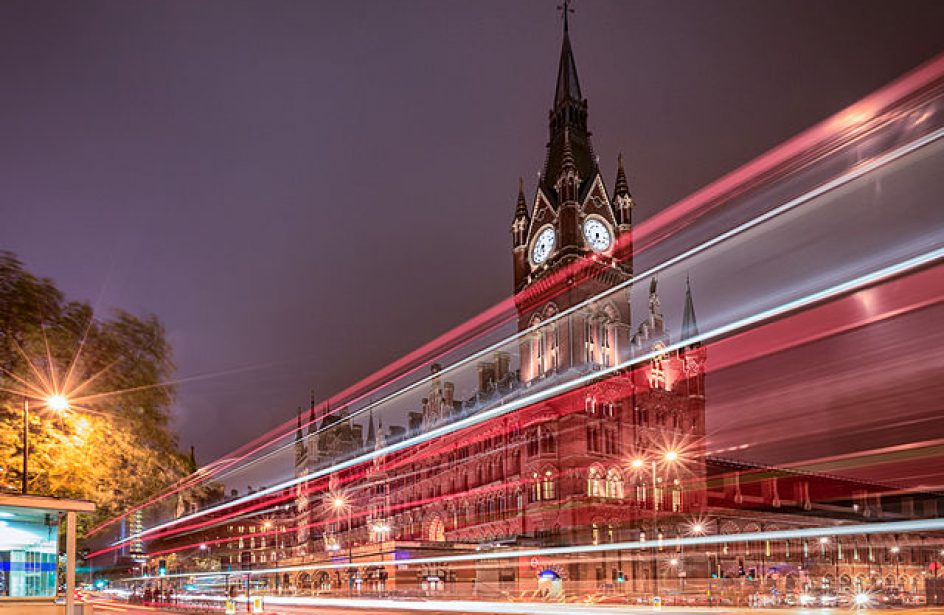 The piece, entitled Thought of Train of Thought, is a sculpture by celebrated sculptor, Ron Arad RA, and is the second public artwork in a four-year partnership between the RA and St Pancras International. As it is suspended by wires from the Barlow Shed roof, the blade rotates slowly, creating an optical illusion.

“The rotation and the horizontal movement take turns in the viewers’ perception as the readings of the object alternate and the hypnotic effect is greater than the means, so will hopefully be the delight of the public at St Pancras,” explained Arad.

The piece, which will hang at the Grade I listed building until January, represents a special experience in the life of the Tel Aviv native.

“This is a very busy place, one of the first places I visited when I first came to London in 1973,” he explained. “I looked up and thought: ‘Wow.’ I hadn’t seen anything like it. There is something humbling about the station.”

St Pancras, through which pass around 48 million travelers each year, can be a hectic locale. As a result, Arad created a work that he hopes has a calming effect on those who take it in.

“The experience should be both spectacular and thought-provoking and offer the visitor a genuinely new perspective on a national landmark.”

Arad, whose works have appeared in London, Tokyo and Madrid, as well as major retrospectives of his work at the Centre Pompidou in Paris, New York’s MOMA and the Barbican in London, feels the venue marries well with the piece he designed.

“I want this piece to enjoy the freedom from the static meeting of gravity and ground,” he says. “Yet in a place like St Pancras – rich in architectural details, busy with movement of people, trains, billboards and other stimuli – the piece needs to be minimal, monolithic and calm but with effective visibility and impact.”