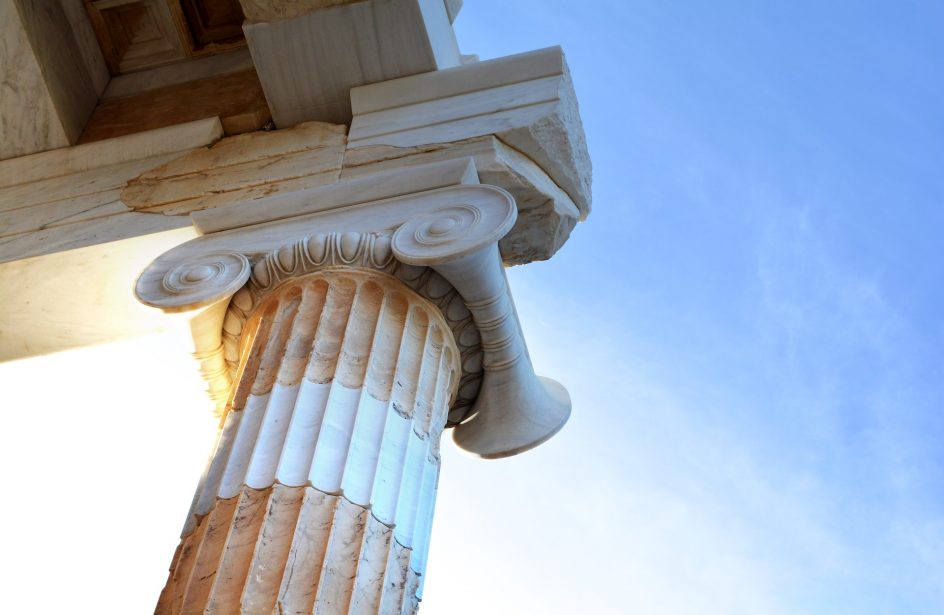 The conference presentations started with Development of rolled products demand, presented by Dr Constantinos Catsaros, a member of the Board of Elval-Halcor S.A.

As the conference main sponsor and the host of the gala dinner at Stavros Niarchos Foundation Cultural Center (SNFCC), Mr Catsaros reminded delegates that slowing demand and the slowing global economy is expected to push this year’s growth in Europe for flat rolled aluminium products to the lowest annual level since 2009 – 1.5%. Demand will increase to 5.5 million tonnes in 2020, from 5.4 milion tonnes this year. Auto body sheet (ABS) demand in Europe will increase to 1.5 million tonnes by 2023, a 5% CAGR increase. The packaging industry, however, (both rigid and foil, in all forms) will benefit from the recent initiative to ban “single use plastics”.

Mr Catsaros stated that the main subsidies for Chinese exports of aluminium rolled products come from the country’s 13% VAT rebate. China continues with FRP (flat rolled products) investments. The current production is estimated at around 11 million tonnes /year, while capacity exceeds 20 million tonnes (Mt). Some 8 Mt is consumed locally, while the remainder of around 3 Mt is exported. China’s capacity is expected to reach 23 Mt/y by 2023. This year, Elval (the rolling unit of Elval-Halcor) is starting the 4-Stand Hot Rolling Finishing Mill, a part of ongoing € 150 million investment project.

He reminded participants that the LME price has cut deep into the cost curve since 2012. Global aluminium smelters were predominantly in the red (over 50% of global production) in 2012 and 2013, when smelters belonging to the third and fourth quartile of the costs curve were losing money. After falling in 2016 and 2017, smelters costs have risen in 2018 sharply but were supported by higher LME cash prices and so smelters avoided losses in the ranges seen in 2012 and 2013. This period has also showed that the average growth in smelters costs has moved towards minimum cost regions.

Another cost component is the benefit integrated smelters (who produce their own alumina) receive from low transport costs and the fluctuations of alumina prices on the market. Being an integrated producer does not necessarily guarantee lower costs for alumina supplies to the smelter, especially when the alumina price is low (as is the case currently). The share of integrated aluminium smelters has grown from 14% in 1984 to 40% in 2019.

As for smelters’ energy sources, coal is firmly in the lead, largely driven by China’s growing installed capacity over the last ten years, while gas is the dominant source in the Persian Gulf. As an aside, there has been rise in self-generated power, also driven by China, but as is the case with alumina, self-generated power is not a guarantee for lower electricity costs (compared to electricity from the grid received at subsidised prices). Lower electricity costs have been achieved not only because self-generated or subsidised power but also thanks to lower power consumption in new, more advanced and efficient smelters.

The total production of primary aluminium in the region’s five countries amounted to 5.41 Mt in 2018. Production is expected to increase to 5.7 Mt this year and to exceed 6Mt in 2020. Production of downstream products (FRPs, extrusions, casting and forging, rod and conductors, others) reached 2 Mt in 2018.

The Gulf aluminium smelters are low cost producers and enjoy low electricity tariffs from gas powered plants. The average electricity consumption per tonne of aluminium produced in the region is 12,900 KWh. Raw materials supplies remain the main challenge for the GCC smelters. Among major concerns is the political situation (instability) in the region which translates to high insurance costs for smelters.

China’s bauxite production has peaked in 2018, with around 112 Mt, and is now declining due to depleting bauxite reserves, lower grades and environmental constraints. Imports are increasing in 2019, mostly from Guinea and Australia as key sources, which have successfully replaced Indonesia and Malaysia. China’s smelter grade alumina (SGA) production continues to grow: 70.6 Mt (forecast, 2019), 74.4 Mt (2020) and 76.5 Mt (2021). Ample global bauxite reserves can serve current alumina production rates for over 60 years. Global third-party bauxite demand growth will be driven largely by China and several new RoW refining projects, including:

Bauxite production in Guinea is forecast to increase from around 77 Mt in 2019 to around 100 Mt in 2023. The eventual lifting of the Malaysian mining ban and the potential acceleration of Indonesian export ban (January 2020) are unlikely to significantly impact the market.

Yang Cao, Senior analyst at Fastmarkets MB, provided Chinese Aluminium Market, review and outlook. China’s demand for primary aluminium will rise by 1.5% this year, a decrease compared to past rates due to the slowing Chinese economy and the ongoing trade dispute with the U.S.

Similarly, inventories have been falling since February this year, due to production drops and slowdowns in new capacities and restarts. During the traditionally slow season between July and August, there was no build-up in inventory, which indicates a balanced market. Destocking started in September again and is expected to last until November. The aluminium inventory in China was at 9.5 days of consumption in September, down from the March high of 17.2 days.

It is expected new smelting capacity to commence production in Q4: a total of 2.9 Mt/y of capacity is scheduled for 2019, although only 1.7 Mt/y has come on stream in Jan-Aug. In Q4 alone, a total of 1.2 Mt/y capacity is expected to come online, adding pressure to next year’s supply and exports. 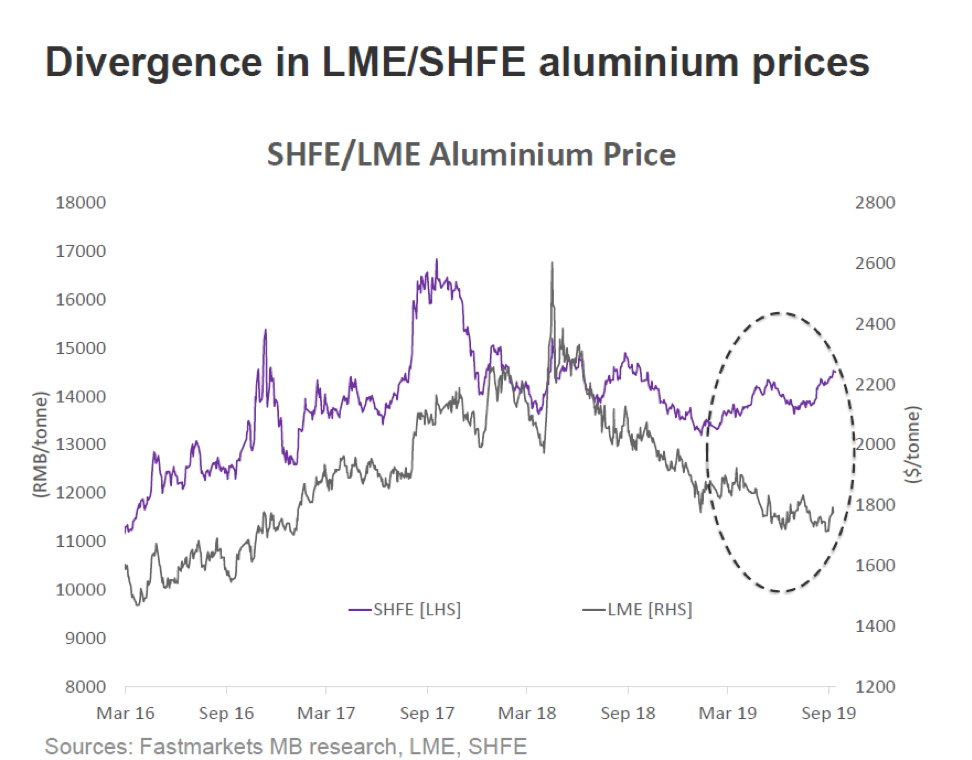 The percentage represented by alumina costs in the total production cost for aluminium smelting dropped from 45% in May to 35% in September 2019, resulting in growing profits for aluminium smelters. Alumina prices are not expected to experience any significant recovery in 2020. Yang Cao said that almost 9 million tonnes/year of alumina refining capacity will come on stream in 2019-2020, but the production will not follow capacity expansion growth.

China’s exports of unwrought aluminium and aluminium products were 3.94 million tonnes in Jan-Aug 2019, up 5% y-o-y. Export growth has turned negative since June, with August’s exports totalling 466k tonnes, down 9.9% y-o-y, the lowest growth rate in 33 months. Although the depreciation in yuan can be supportive for exports, the high level of SHFE/LME price ratio has squeezed exporters’ profits. Thus, FastmarketMB does not expect the growth rate of China’s unwrought aluminium and products exports to recover soon.

While the main theme for 2019 was the slow growth in demand and the faster fall in output, FastmarketsMB expects China’s market balance to turn to surplus next year, as a result of new capacities coming on stream and restarts, on the back of the increased profits for Chinese smelters. 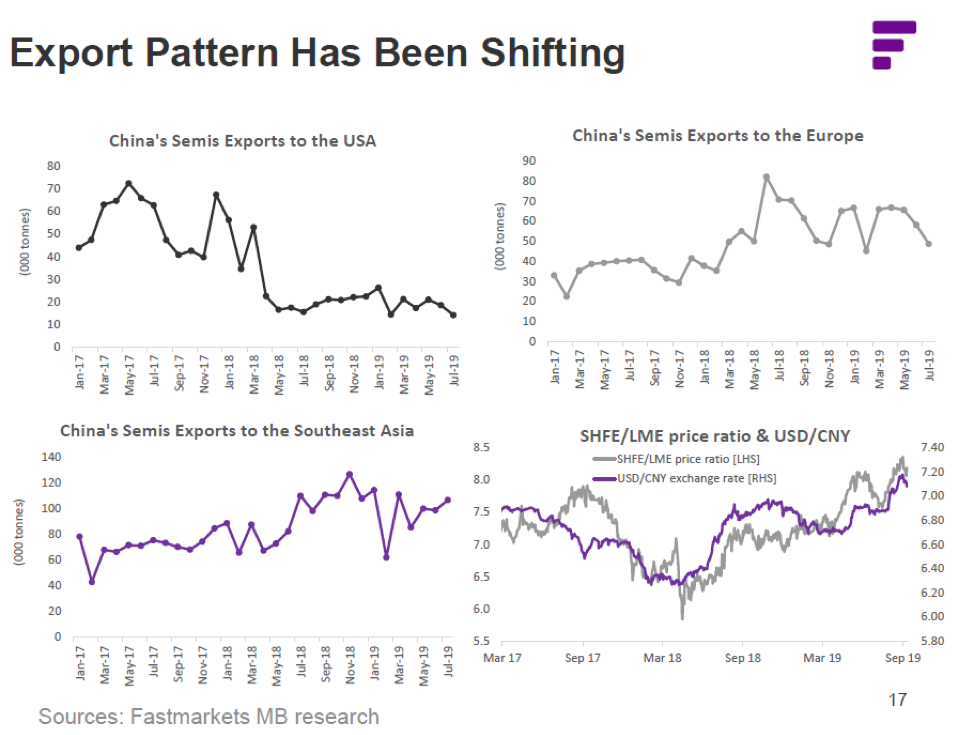 Benedikt Zeumer, a partner from McKinsey & Company, presented Aluminium in the light of overall market challenges.

Zeumer said that despite the economic slowdown, the aluminium market still has growth potential. Recycling and reuse will have an essential role to play in the future and will be an important driver of economic growth. Underlying factors for growth in aluminium demand will come from the automotive, consumer application and engineering sectors.

The outlook by McKinsey & Company does not indicate that the aluminium share in cars will increase dramatically but will rather stay constant. The average aluminium content in vehicles will grow from 10% in ICVs to 18% in BEVs.

A consistent reduction of aluminium content in EVs from 1st to 2nd generation BEVs (replaced mostly by steel) has been seen, but aluminium is still heavily used in premium BEVs (and ICEs alike). EVs (BEVs and PHEVs) will have 22% market sales share in 2030 according to the Base case scenario assumptions and/or 36% out of total vehicles sales under the Breakthrough scenario assumptions. In the first case, EVs battery prices should fall to ~ US$ 90 /kWh, and in the second to ~ US$ 70 /kWh by 2030, indicating the key importance in EVs sales growth in future (together with the whole price of an EV).

Thus, while overall volumes might decrease, due to substitution, high margin products will not be affected, and may even increase, as these products see new demand from the growing Asian middle class. Growth in aluminium demand is likely to continue, based on fundamental growth drivers from end-users –it will be driven by end-customer segments and not by region.

When it comes to trade protections, there are a lot of misunderstandings going on. Most trade measures are permitted, and countries are allowed to impose tariffs as long as those do not exceed the bound (maximum) negotiated commitments. Those are considered trade remedies, meant to counter the effects of unfair trading practices – for instance, anti-dumping measures and anti-subsidy measures.

There are mechanisms that allow the EU to reduce or remove import tariffs, at the request of a certain industry (for instance when there is insufficient production in the EU). Suspensions and quotas in force in the EU (exemptions from tariffs) include several aluminium products: 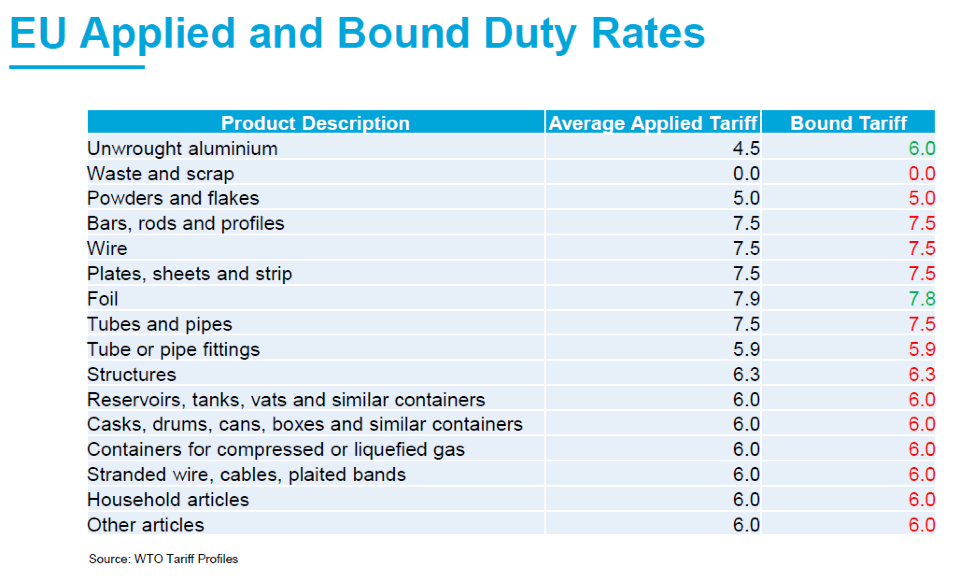 The growth in foil consumption is slowing this year, to around 3% globally, and around 2% world ex-China. Global foil demand is expected at 5.9 Mt in 2019 in the world. China has 53% share of the global foil demand, followed by Europe with 15% and U.S. with 12%.

Lithium-ion battery market size was about US$ 23 bn in 2018 and is expected to grow by 17% per year (Glimm did not provide a time horizon, but probably over the next five years). Aluminium cathode foil is used as the positive electrode for the cathode current collector in Lithium-ion batteries. The global cathode aluminium foil demand was around 60kt in 2018, and 40% was used for EVs. Demand is expected to grow by 30% CAGR (similarly, Glimm did not mention a clear timeframe).

India has the eighth largest bauxite reserve in the world (around 700 Mt) and the fifth largest coal reserves. India has the leading role in primary aluminium consumption in the world, with 7 % CAGR growth forecast in the “next several years”.

India’s construction industry is expected to grow at 6% p.a., to a market valuation of US$ 690 billion in 2023. The market for packaging and foil stock is estimated to grow at a CAGR of 18% by 2023. Demand drivers are expected to be the retail boom, growing e-commerce penetration and the expanding urban middle class population.

The author also presented a piece at the conference, named Light weighting for electric vehicles: game changer for aluminium industry? The key figures and conclusions from the presentation are summarized here.