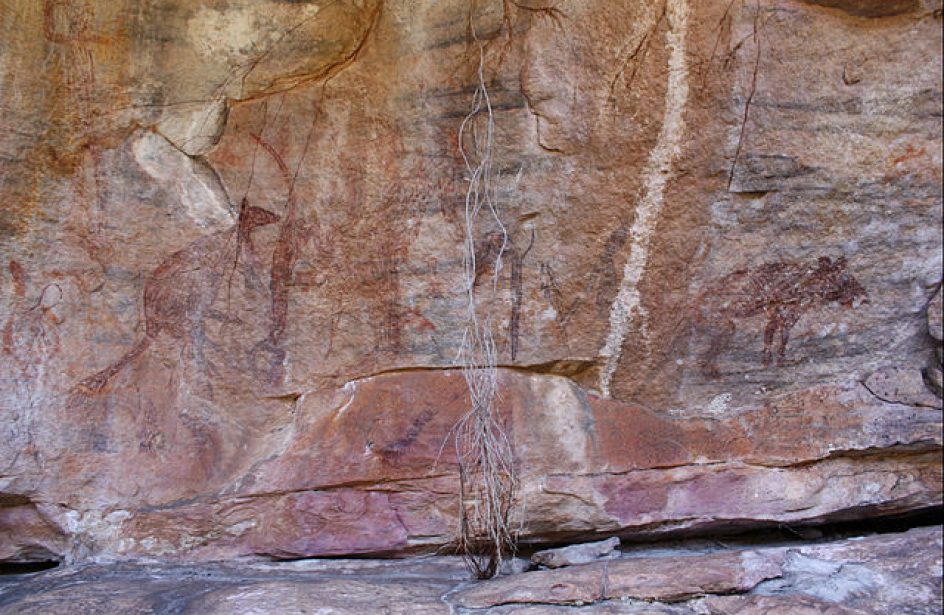 Various extinct animals such as the thylacine or Tasmanian (marsupial) tiger were painted on a wall in a far corner of Djulirri, Arnhem Land, Northern Territory. Source: Wikimedia

Australia’s Northern Land Council has agreed to permitting an Aboriginal-owned mining company to commence a small-scale bauxite operation in northeast Arnhem Land, in the Northern Territory. This is believed to be the first time an Aboriginal clan has operated a mine on land it traditionally owned.

Gulkula Mining Ltd is operated by the Gumatj clan, and will be opening a mine on land formerly occupied by Dhumpuma residential college on the Gove Peninsula. A Yonglu training center will be operated nearby at Gulkula.

“We are determined to be a part of the economic life of this nation and to use our assets for the betterment of our people’s lives,” he explained.

Local media has reported that the clan is in negotiations with Rio Tinto for purchase of bauxite produced at the mine. The mine cannot legally be opened until late August, as it is still subject to approval by the Northern Territory Department of Mines and Energy.

“This is an historic agreement,” the NLC’s chairman, Samuel Bush-Blanasi, said. “It’s the first for a mining company wholly owned by traditional owners and I congratulate the Gumatj clan for their vision and enterprise”.

The agreement includes provisions for royalty payments to the clan, employment of the Aboriginal population, environmentally-responsible practices, and an assurance that Aboriginal culture and traditions would be respected.

“In the transition of the economy that Nhulunbuy continues to go through, to see ownership and operation of this new site is an exciting step,” Lynne Walker, the deputy opposition leader and the member for Nhulunbuy, told local media. Nhulunbuy has been hard hit due to the closing of the alumina refinery and the slowdown of the bauxite mine the town was created to service.

“Plus the fact it’s owned by a clan group and owned and operated by Yolngu is really quite significant.”

Although she doesn’t believe the alumina refinery will reopen again, the demand for bauxite remains significant.

“I think it will benefit the region,” she said. “I think the benefits are going to be across the Northern Territory, because they are setting up to operate not just for locally based Yolngu but for Aboriginal people around the territory who want to develop skills in the resource sector.”