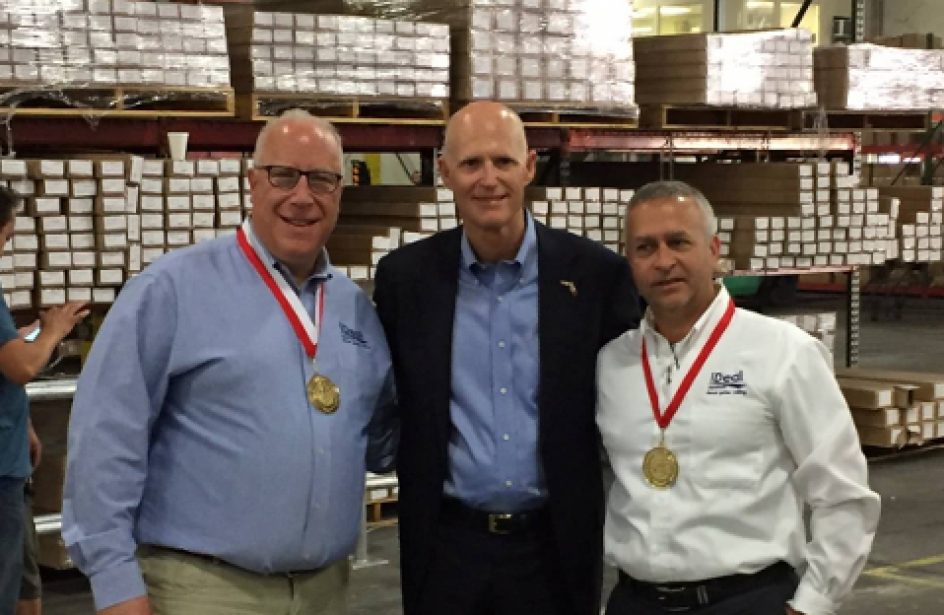 Florida’s governor Rick Scott visited aluminium fence and gate manufacturer Ideal Aluminum on Friday, holding the firm out as an example of a successful local manufacturer that has excelled over the past several years at putting Floridians to work.

Ideal was purchased in 2010 by Michael Siegel and Doug Brady, who moved it to its present location in St. Augustine last year. The firm currently employs around 115 people.

Ideal’s owners told local media that they were drawn to this location due to the existence of a perfectly suited vacant facility close to a main thoroughfare. They also indicate that area tax incentives have kept them in Florida.

“Ideal is thankful to be in a state that is so focused on economic development,” Brady explained. “We really feel that we have partners in the state of Florida as well as St. Johns County.”

Siegel said that he found enjoyment in employing people at good positions with superior wages. He went on to say that roughly one quarter of the workers Ideal employed prior to its move to St. Augustine followed the firm to its new location.

“It’s beyond what we had hoped,” said Siegel. “We have been able to access fantastic people. And that really is what makes the company so great. The stability of the workforce, the passion of the workforce and the interest in making a great company together make everything worthwhile — including the hassles of the move.”

He went on to point out that, on average, employees at his firm make almost double the federal minimum wage of US$7.25 per hour.

“We’re probably one of the few employers anywhere that would like to continue to see our average hourly rate increase,” explained Siegel. “It just changes everything. People feel like they are fairly rewarded.”

Local officials are quick to point out the successes of Ideal in producing quality jobs that pay exemplary wages, holding the firm out as an example they hope others will follow.

“St. Johns County, our first priority is really economic development and bringing opportunities to our residents for high-paying wages,” said St. Johns County Commissioner Rachael Bennett. “Ideal has been one of our most magnificent success stories.”

“The economy around here is strong. We continue to pick up new customers,” Siegel explained. “It was a high honor to know that the governor and his office and all of the supporting offices in Florida and St. Johns County support our business the best that they can. It’s also validation for Doug and me that we’re doing the right things.”