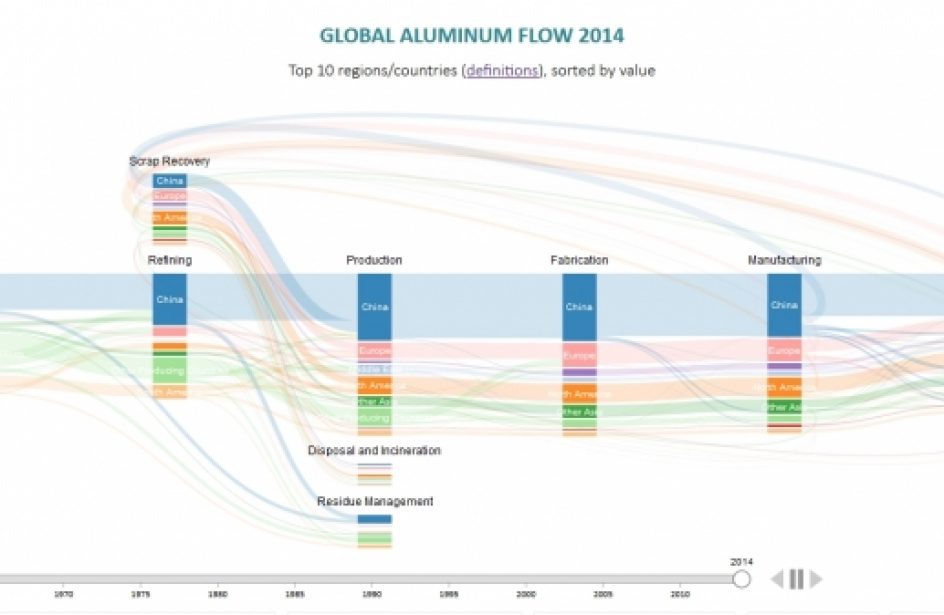 The institute’s new mass-flow visualizer aids the user in understanding the aluminium value chain from its beginning at the bauxite mine to its end as scrap. The program also details inter-regional trade flows of the metal in its various forms. It delivers a Sankey diagram that can be manipulated by the user of data about the global aluminium trade from 1962 through 2014.

Speaking at the launch of the application at the 14th International Aluminium Recycling Congress in Manchester, England, Marlen Bertram, the Institutes Director of Product Stewardship said, “the visualisation is a powerful way to express the results of the aluminium mass flow model, which has been developed over the past fifteen years by the IAI and its members, industry partners and regional and national aluminium associations, in conjunction with Professor Daniel Müller and his team from the Norwegian University of Science and Technology. The Institute will update its mass flow model and the animation annually, with 2015 data being added in the next few months and 2016 data by the end of 2017.”

Senior VP & Head of Recycling at the aluminium company Hydro and Chair of the European Aluminium Recycling Division Roland Scharf-Bergmann spoke highly of the new data visualization tool as well.

“The mass-flow visualisation, built on data shared with IAI from industrial partners along the aluminium value chain and across the world, underlines the excellent cooperation within the aluminium industry and its openness to sharing knowledge and data with stakeholders globally,” he said.

The IAI is a global forum for aluminium producing firms. It boasts over two dozen members at present, and focuses upon promoting the benefits and sustainable use of the metal by emphasizing a holistic approach to the aluminium lifecycle.