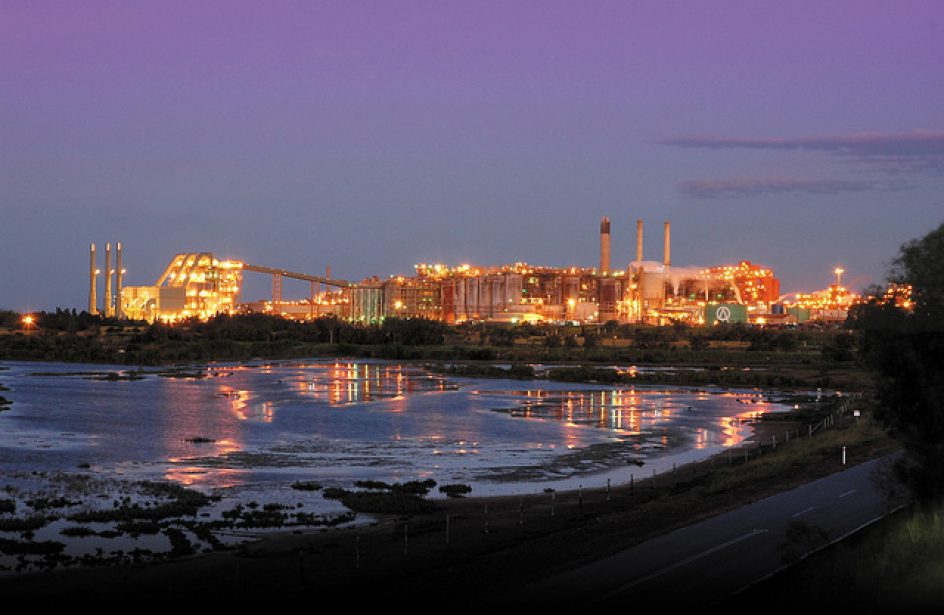 Record high power prices are making difficult times worse for the aluminium industry in Australia. The latest victim is the Boyne Island smelter majority owned by Pacific Aluminium (a wholly owned subsidiary of Rio Tinto, and co-owned by several Japanese companies), who decided to reduce production by 14% or some 80,000 tonnes/year at the end of March. Worse, by the end of the month, the Hazelwood 1760 MWh coal fired power plant will also be closed,. Some 100 smelter workers will lose jobs, or approximately 10% of the workforce. Since electricity costs have doubled since October 2016, the Boyne Island smelter was unable to secure the missing 140MW at reasonable prices. 85% of the smelter’s electricity comes from the Gladstone Power Station, a 810MW plant that is 42% owned by Boyne Island under a contract due to last until 2029. However, the remaining 15% is purchased on the open market.

Secondly, during the February heat wave, the Tomago smelter (also owned by Pacific Aluminium) had to curtail operations for four hours so power could be diverted to Sydney residents some 150 kilometers away. Approximately 300 MW were therefore diverted to households. The plant didn’t have much say in the matter: with the exception of 50MW, which it purchases on the spot market, Tomago gets most of its energy from a long-term contract signed with AGL Energy. Power supply contracts for large consumers, and aluminium smelters, now typically include clauses allowing generators to divert power to residential users and essential services such as hospitals.

Lastly, a power outage at Alcoa’s Portland smelter last December caused molten aluminium to solidify, while the production had to be reduced to less than a third of nameplate capacity. Alcoa agreed to resume full production only after obtaining a government backed rescue package worth A$240 million (US$ 182 million) over four years. The government’s financial aid is conditioned on the smelter remaining open at least until 2021 and output remaining at a minimum of 90 % of pre-blackout levels. It is expected to take six months to bring back to full production. Interestingly, the outage coincided with the conclusion of a favorable power supply contract struck with the government 30 years ago. 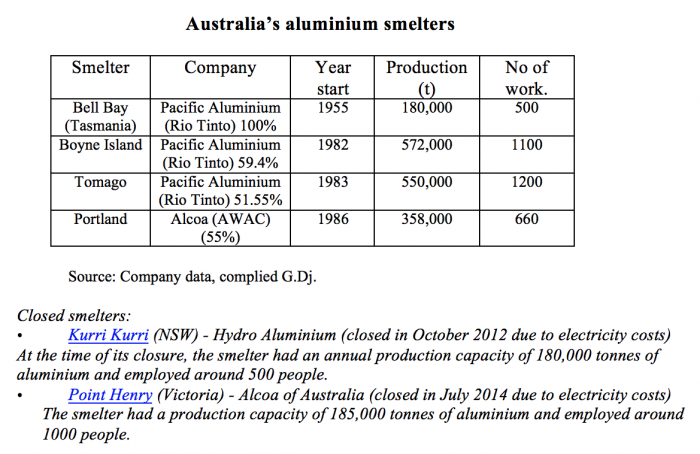 The Portland smelter directly employs about 500 full-time employees and 160 contractors,while some 2000 spin-off jobs rely on the plant’s operations. Once repair works are completed, the smelter’s capacity will be restored to around 300,000 tonnes /year. Under the government-backed plan, the smelter also signed a four-year power supply deal with AGL Energy for 510 MW, or about 10 % of the state’s electricity load. No details were disclosed on the pricing.

In the wake of the deal, Alcoa wrote down its stake in the Portland smelter by US$ 126 million, implying a value hit of US$ 229 million for the whole plant, because of higher power prices under the new power deal signed with AGL Energy. The smelter had already reported a US$ 30.2 million full-year loss in 2016, on lower aluminium prices and lower production.

Extremely high power prices and frequent power failures in February have brought Australian aluminium smelters, and other energy intensive industries, to the brink of extinction. Even though most of the production is secured thanks to long term power contracts with favorable prices – significantly lower than current spot prices – unpredictable power interruptions and blackouts have severely shaken the industry. The sudden and unannounced failures of gas generators were mostly to blame for unexpected blackouts during last month’s heat wave, according to Australia’s energy operator. The combined failures left about 2,000MW power unavailable during the peak period of demand. 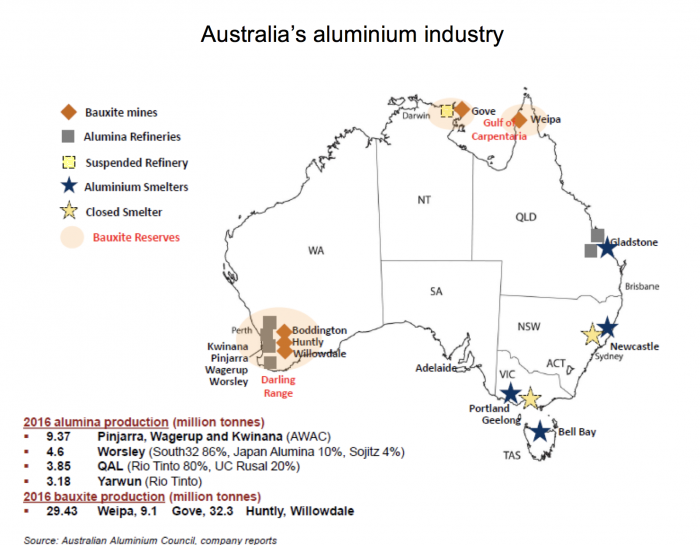 Average spot power prices in February in Australia were between 98 % and 360 % higher than a year earlier, with prices in Queensland averaging US$ 239.60/MWh, according to Citigroup. Forward prices were up in all states by 33 % in February over January, and rose by US$ 100/MWh for 2017-18 in all states. Next, as Australia is increasing its exports of liquefied natural gas (LNG) in a bid to become the world’s largest exporter, there is a real threat of a gas crunch in 2019, which could trigger industry supply cuts and power outages,

Secondly, a shift away from coal-fired power plants amid a rush to meet a national 20 % renewable energy target by 2020 has left the country unprepared for the record high electricity demand during hot weather. The paradox is Australia is among the world’s largest producers of coal and gas while also experiencing power blackouts and load shedding. Big companies and major exporters, such as BHP and Rio Tinto, complain they are having difficulties competing internationally because of Australia’s much higher power prices compared to other world regions. The companies also warned that the investment climate is not promising for the future.

In a bid to prevent future power blackouts, the Australian government has been rushing to embrace quick fixes. Virtual power stations are being proposed, made up of thousands of batteries spread across suburban neighborhoods that can be controlled by utilities. Sophisticated computer programs will adjust the flow between the energy stored from solar panels or wind turbines and consumption. The system would also work towards lowering price spikes during times of high demand. A recent analysis by SunWiz has predicted exponential growth in home battery storage. In 2016, there were 6750 battery installations, up from 500 in 2015.

The primary aluminium industry in Australia has gone through difficult times during the summer months. Since the summer months of the Southern Hemisphere have passed, smelters are in line for a period of relief, at least until demands peak again during summer and winter. Australian smelters will produce a projected around 1.6 million tonnes of aluminium in 2016-17, down from around 1.96 million tonnes in 2011-12. Exports are expected to amount at US$ 3.3 billion, according to IBIS World. Approximately 90% of the industry’s exports are destined to Asia. 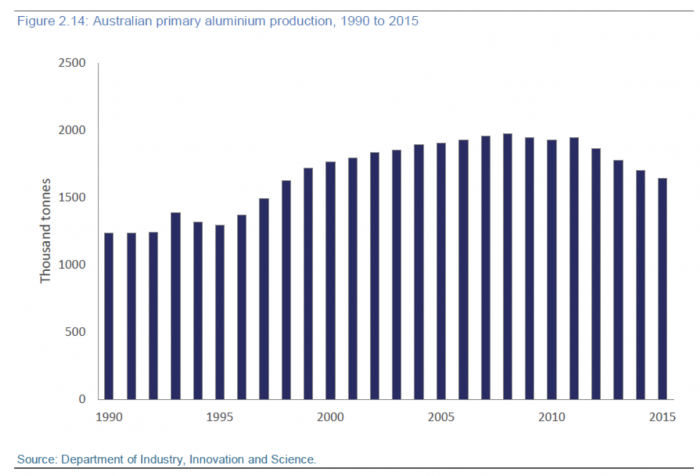 However, most local experts and analysts do not see a quick solution to the problem and expect power plants failures and electricity price spikes to continue, albeit to a lesser extent. The Hazelwood power plant closure, set for the end of March, has also heightened worries about the risk of blackouts on a grid with reduced access to baseload power. It is obvious that transition form coal and gas powered plants to renewable energy (wind and sun) has jeopardized the entire Australian electricity system, causing damages and major losses to industries. The bottom line is that the government erred by rapidly switching to renewable energy sources without valuing energy security.

Goran Djukanovic is an aluminium market analyst and consultant, based in Podgorica, Montenegro. He is a speaker at this year’s 47th FARO Meeting in Imola, Italy, on 6/7 April