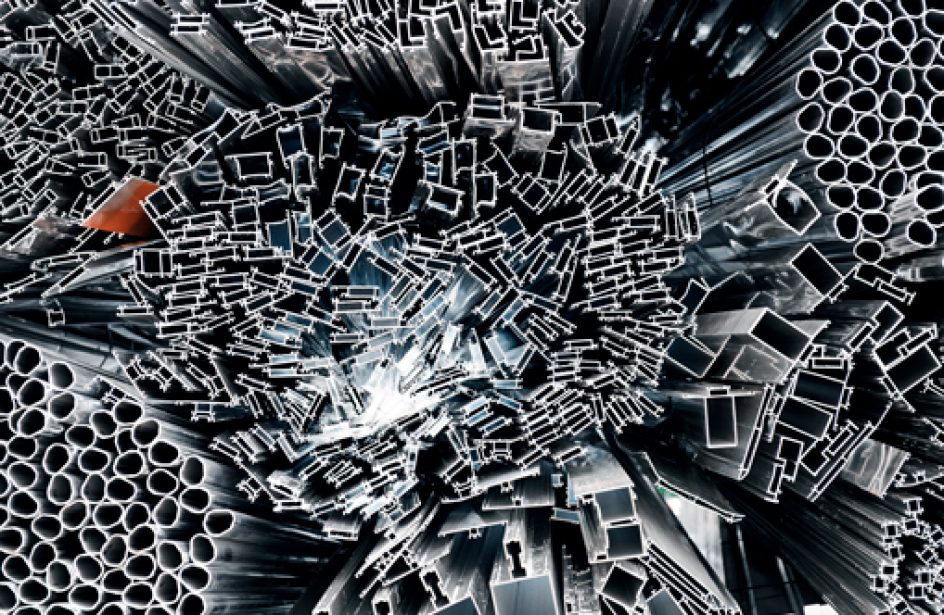 Base metals prices continued to slide in May and early June, with metals traded on the LME witnessing some serious losses, causing the index to drop by 6.6% in May. The reason for this fall remains the same: investors are cautious about demand for metals amid a lack of progress in the prolonged U.S.-China trade war and weak manufacturing data from the world’s top economies. Prices of zinc and copper were among the worst performers, both registering the biggest monthly loss in nearly seven years (zinc) and three and a half years (copper).

Unsurprisingly, aluminium prices are under pressure again in June due to stagnating and low demand and continued high aluminium exports from China. The LME trends at 29 month lows, (US$ 1720.5/t on June 10), after data showed an upswing in exports from China, fuelling worries about oversupply. 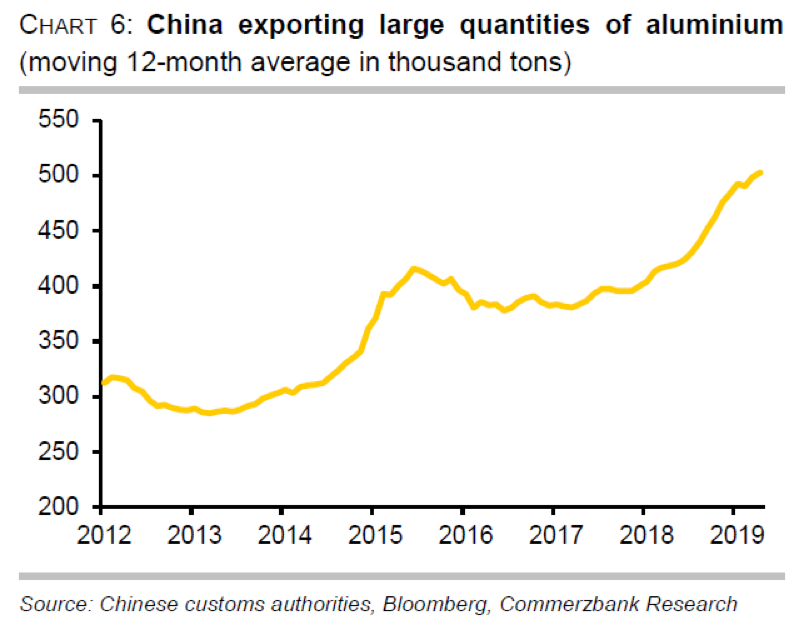 Trade tensions between U.S. and China escalated sharply and unexpectedly earlier last month after the Trump administration accused China of having “reneged” on its previous promises to make structural changes to its economic practices. Furthermore, President Trump’s threat to introduce import tariffs on cars and car parts is still on the table. Though the introduction of the tariffs was recently postponed for up to six months, there are real chances they will see the light of day eventually.

Naturally, prolonged pressure on metals prices remains. This explains why Commerzbank does not bear much optimism for the significant recovery of the aluminium price, estimating an end-of-year price of  US$ 1,900 per tonne. “(Trade tension) is dominating the market at the moment and it’s hard to see how that will change too much,” said Daniel Hynes of ANZ. “There have been plenty of positive fundamental factors emerging in recent time but the market has chosen to ignore them, so it’s hard to say things can really recover on a sustainable basis,” Hynes said.

Moreover, even when metal prices briefly and temporarily recover (as it happened on several occasions in May), market observers attribute the fluctuations, which happened within a matter of minutes and involved a very high volume of trading, to algorithmic trading activities. In other words, follow-up buying was triggered automatically when the price rose above a specific threshold – meaning that the upswing had nothing to do with fundamental factors.

Aluminum production in the world in January-April 2019 amounted to 20.909 million tonnes (Mt), which is almost 0.4% lower than the same period in 2018, according to preliminary data from the International Aluminum Institute (IAI). 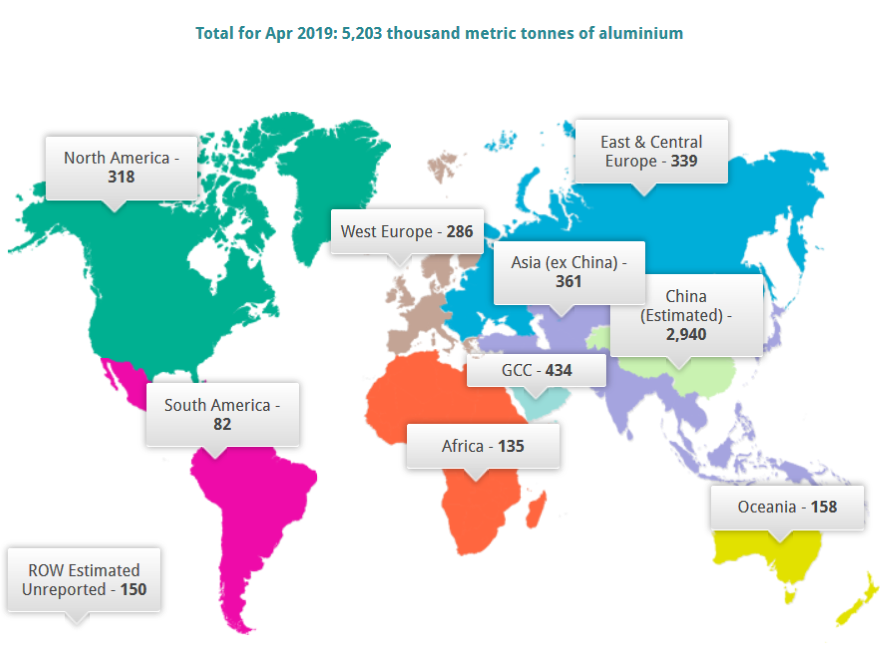 The U.S. produced 890,000 metric tonnes of primary aluminium in 2018, some 20% more compared to 2017, according to the United States Geological Survey. In January of this year, production was up 40 % from January 2018. The surge was the result of three plants restarting capacity after Section 232 tariffs were announced. However, the U.S. remains a major net importer of primary aluminium, to the tune of 4.1 Mt last year.

Global aluminium premiums continued to gain support from a prolonged wide contango in London Metal Exchange spreads in the week ended Tuesday June 4, with Rotterdam premiums edging higher and active trading at the main Japanese ports (MJP). The aluminium premium in Rotterdam on a duty-unpaid basis edged higher for the second week in a row, continuing to be supported by the sustained contango in LME spreads. The benchmark Rotterdam P1020 duty-unpaid premium rose to US$ 90-100 per tonne on June 4, from US$ 90-95 per tonne a week ago, according to the Fastmarkets. Duty-paid also rose to US$ 150-160/t. Traders were in no rush to sell their stock and were happy to hold onto material due to the contango which makes stockholding profitable.

Global aluminium billet premiums were mostly flat on Friday June 7 due to a lack of spot business, but the premium in Spain fell to its lowest since August 2017. Billet premiums in Germany, Italy were stable. Argentinian material offered at US$ 500 per tonne in Brazil. The premium for billet in Spain, delivered duty-paid with 60-day payments, declined to US$ 350-360 per tonne on June 7, down from US$ 360-380 per tonne two weeks prior. The premium is down 38% since the start of the year. While aggressively low offers were heard for third-quarter negotiations, some consumers were bidding as low as US$ 310/t for lower-quality brands.

High, rising production, slowing demand and ongoing record high export levels are the main characteristics of China’s aluminium market this year. “Over production will be the trend going forward and will have the negative impact on aluminium prices. The economy is slowing down, demand is not strong,” said analyst Helen Lau of Argonaut Securities. Analysts at BMO Capital Markets estimate that Chinese aluminium demand growth last year was anaemic by historical standards, reaching just 1.1 % growth.

Given that China has long been the engine of global aluminium usage growth, last year’s tepid performance dragged global usage growth down to 2.6 %, the slowest since the Financial Crisis, according to BMO.

Chinese manufacturers saw orders for automotive extrusions in aluminium decline in May, according to an SMM survey, likely due to upcoming new vehicle emission standards that deterred automakers from producing while they clear inventories of models under old standards. The China VI emission standards for light- and heavy-duty vehicles are set to kick in across some regions from July 1.

As part of efforts to combat pollution, the Chinese government will require all light vehicles to adhere to tougher “China VI” emission standards by July 2020. In face of increasingly heavier environmental pressure, the new standards will go into effect in July 2019 in certain prominent areas such as Beijing, Shenzhen and Shanghai.

Continued weakness in auto sales also weighed on demand for aluminium automotive extrusions. Sales and production of vehicles in China continued to decline year on year since the second half of 2018, and failed to recover this year. Producers were pessimistic about demand in June. Lower orders for aluminium automotive extrusions in June will affect the average operating rate across industrial aluminium extrusion producers, according to SMM. China’s automobile sales will reach around 28.1 million units this year, unchanged from 2018 levels, state news agency Xinhua reported.

The secondary aluminium market has already taken a hit from sluggish auto sales. Data from the China Association of Automobile Manufacturers (CAAM) showed that auto sales in China in January-April declined 12.1% from a year ago.

The price of bauxite imported into China will continue rising gradually over the next 5-10 years on stronger domestic demand, chief executive officer of Metro Mining Simon Finnis told Fastmarkets at the Alumina & Bauxite Conference held in Zhengzhou between May 16-17.

After looking at all the economic data, the main takeaway is that the optimism present more than a month ago, on a happy outcome for U.S.- China trade talks, is not so certain anymore, and an agreement may not come as previously expected. While surprises can certainly occur, the current level of uncertainty is enough in and of itself to erode demand and market confidence. Trade tariffs are harming both sides, which is reflected in latest economic data, and it’s clear there can be no winners in trade wars, just bigger or smaller losers.

Aluminium and other base metals markets are the “collateral victims” of ongoing and potential (future) trade disputes. On top of that, aluminium markets and prices are under pressure from continued high Chinese exports and lower demand, mostly from the auto (transport) industry.

Under these market circumstances, action is needed to protect the most vulnerable aluminium smelters in the U.S. and Europe, as well as those in China. Waiting for a “natural” market selection, in an environment of low aluminium prices, is neither sustainable nor fair. It would be best for the price if China would reduce production and exports. Though some excessive production has been curbed recently, high and growing exports remain the major enemy for aluminium prices.

Finally, aluminium processors and consumers of final products (auto, aerospace, construction industries etc) should accept that they cannot profit on account of losses of primary aluminium producers around the world and must accept and accommodate on higher primary aluminium prices, compared to current ones.

As things stand now, without any action, more than half of the aluminium smelters in the world are cash negative at current prices, while further fall of prices, and growth of loses in Q3, is not excluded.