Global demand for flat rolled and extruded aluminium products is expected to rise by 5-6% CAGR between 2016 and 2020, mostly due to increased demand from the transportation sector. This is the general expectation held by the major aluminium fabricators based on latest research and forecasts. During the same period, demand from construction will remain weak as major economies struggle to stabilise financial sectors, with GDP growth stagnating. 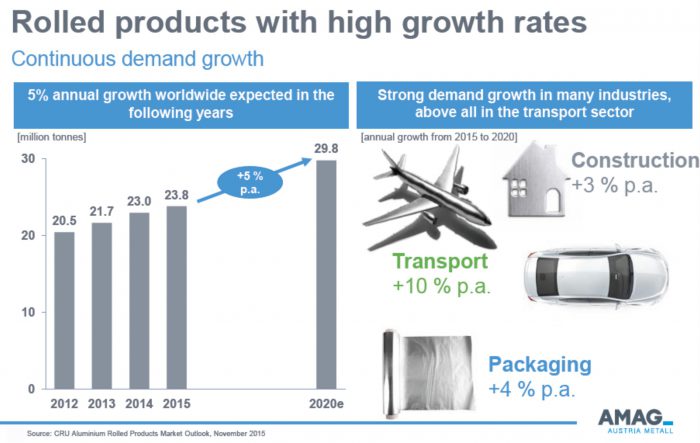 The major increase in demand, both for extrusions and flat rolled products (FRP-s),will come from China, followed by India, Brazil and other developing countries. Demand for automotive sheet alone will be the highest in North America (up to 25-30 % CAGR), Europe, and East Asia ( 10-12 % CAGR), increasing from around 1.2 million tonnes in 2015 to around 2.4 million tonnes in 2020, marking an average global growth of ~ 15% CAGR.

Similarly to the primary aluminium segment, China holds a major role in the global market when it comes to downstream aluminium semi-finished products, both in production and consumption.

Global demand for semi-finished products is currently around 80 million tonnes per year, out of which Chinese demand is approximately 36 million tonnes, and 44 million tonnes for the rest of the world. Global demand for FRP-s is around 24 million tonnes (out of which ~50% belongs to East Asia (incl. China)) and around 26 million tonnes for extruded products (~72% East Asia and China). Little more than quarter of the total demand for semi-finished products comes from transportation while about a quarter goes to construction, both being the largest segments of semi-finished product aluminium demand. Geographically the highest demand is in China (about 45 % of total demand), Asia (excl. China) with 18%, and Europe and North America with around 15% each. These figures are approximate (though quite realistic) taking into account there is no reliable statistical data, just estimates done by some of the leading market research companies, all of which have come up with varying results. Major demand growth for FRP-s came from transportation (especially light vehicles) and packaging sectors in most regions, as well as from the production of pipe and tube. 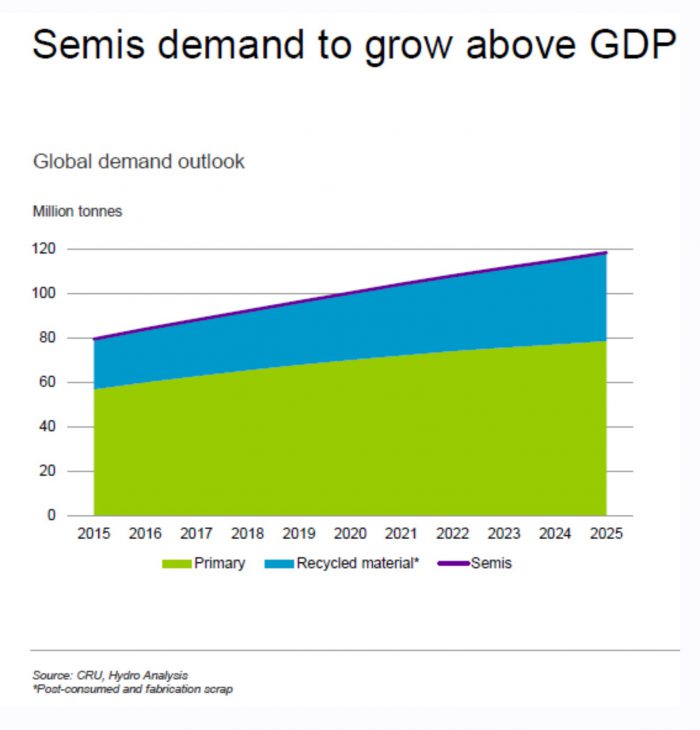 It is estimated that the U.S. market for aluminium auto body sheet is expected to grow from <100kt in 2012 to ~ 450kt by 2015 and ~ 1000kt by 2020. According to a study done by research firm Frost & Sullivan, the global market in automotive applications for aluminium is expected to more than double by 2017, from US$ 13 billion in 2010 to US$ 28 billion in 2017. This would be the result of demanding new fuel-efficiency standards in the European Union, the United States and Japan.

Chinese exports of semi-finished aluminium products have surged in recent years, reaching ~4.2 million tonnes in 2015, almost three times higher compared to the 1.5 million tonnes exported in 2012. There are currently no indices that these exports will vary much in 2016 compared to the previous year. Chinese rolling mills, around 160 and growing, are increasing technological standards in recent years to be able to compete with the most advanced Western rolling mills. However, the majority still lack the technology to produce the kind of value-added products made by Novelis, Alcoa, Aleris and other leading producers. Moreover, technology is not the only issue, as “the exchange of best practises and integrated work with other plants of our company’’, also plays an important role, according to Michael Peter Steffen, spokesman for Hydro Aluminium in Germany, when commenting on Hydro’s Malaysian premium foil mill.

All these major producers of FRP-s have invested significant capital in recent years (several billion US dollars in total) in upgrading and building new production facilities, preparing for increased demand, especially from automobile industry and the transportation sector. Recent research analysis of future additions to capacity indicate that China will continue to attract the largest share of investment, though the type of investment is likely to change moving into the future. It is realistic to expect China to make a qualitative and quantitative shift in new capacity towards the production of higher value added FRP’s such as canstock, auto body sheet and heat treat sheet and plate.

The European market for flat rolled products increased by around 2 % in 2015, according to Norsk Hydro. The automotive segment continued to be the dominant market driver due to the growing substitution of steel with aluminium, together with an increase in European car production of around 6 % in 2015. The beverage can market segment was solid and improved after a weak start at the beginning of the year. Demand in the foil market showed a slightly more positive development. Overall, increasing imports from China and Turkey resulted in increased margin pressure.

Demand for general extruded products was strong in North America compared to 2014, with an increase of more than 5 %, Norsk Hydro stated. European extrusion markets were stable while market conditions for building systems continued to weaken in 2015, in Europe in general and in the key markets of France and Italy in particular. However, the weak European building and construction market was offset by growth in most other segments. The building and construction market represents almost 50 % of the extrusion market in Europe and demand in the first quarter this year increased over Q4 2015 by 10% both in Europe and North America, according to Norsk Hydro. 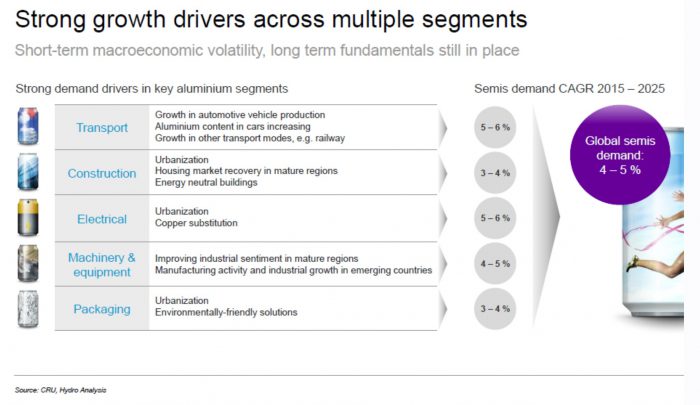 In recent years the trend has been to shift production by Japanese and German automakers to the US in order to reduce costs, which is largely related to a weaker US dollar and stronger Japanese Yen and Euro. Big Japanese and German automobile producers found that it is cheaper to produce autos in the US, rather than producing locally and exporting to the US. This trend represents a fundamental shift in the philosophy of ” we build where we sell”. As a result, the production shift of automobiles in the US has increased local demand for aluminium products used in automobiles and also increased domestic sourcing of auto parts (including spare parts) made of aluminium alloys.

The other trend is automobile production’s shift to China and to a lesser extent surrounding Asian countries, where the relatively cheap workforce and huge market potential are the main motivation for international companies. This trend is also followed by opening plants for production of other input products used in automobile industry, including flat rolled and extruded aluminium products.