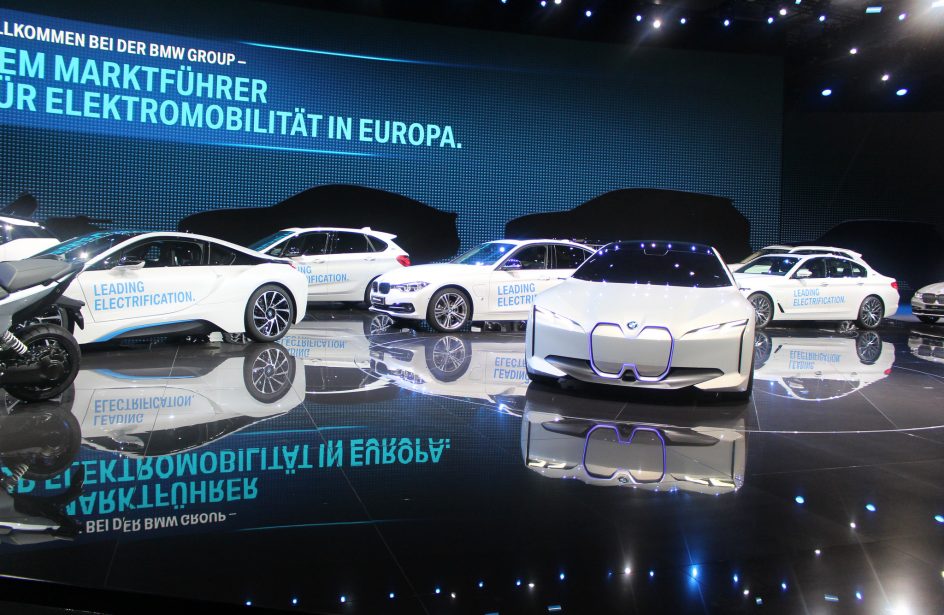 In stark contrast to previous editions, electric vehicles were all the rage at this year’s Frankfurt IAA, the world’s largest motor show. Many premium brand announced they would electrify entire series or that their fleets will be a mix of hybrid and battery-powered vehicles. Aiming to catch up to Tesla, European automakers are increasingly favouring the development of EVs over combustion engines (especially Diesel. “It is quite clear the future will be electric,” Ralf Speth, Jaguar Land Rover chief executive told CNBC. This is good news for the aluminium industry as exponential growth in EVs will be followed by record strong growth in aluminium automobile parts.

BHP Billiton estimates there will be 140 million EVs on the road by 2035 (not including hybrids) or 8 % of the total fleet of 1.8 billion cars. This compares to a little over a 1.2 million EVs today and points to an increase of 11,500% in twenty years. “Concerns about scrap values of internal combustion vehicles (ICVs) may drive consumers towards EVs even before the price differential between the two classes of vehicles closes,” estimates J.P. Morgan. The bank predicts that electric cars could account for 35% of the global auto market by 2025, and 48% by 2030. Similarly, Shell is predicting the world will hot peak oil the next 5 – 15 years, further supporting estimates that combustion-powered transportation is on the down and out. 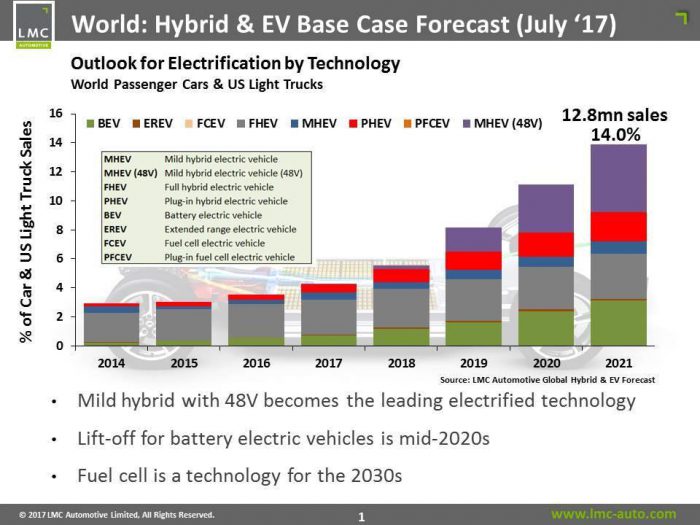 Some are less optimistic though: BMW’s vice president of electric-powertrain development Stefan Juraschek recently told journalists that the appeal of EVs to mass-market customers will remain limited for the next seven years – until battery capacity doubles and matches the autonomy of ICVs.

The decisive variable to the future development of EVs is China, which accounts for one third of the world’s car market. According to IHS Markit, total vehicle sales in China reached 28 million, in 2016, up 13.7% from the previous year,. By contrast, only 17.5 million vehicles were sold in the U.S, as growth remains nearly flat. EVs sales in both countries were relatively small: 359,000 in China compared to 159,000 in the U.S., with around half of those concentrated in wealthy California. Chinese buyers accounted for 53 % of the 774,000 electric cars sold worldwide in 2016.

But don’t let the figures fool you – carmakers are already working against the clock, as China’s vice minister of industry and information technology, Xin Guobin, announced that Beijing will soon join Norway, France and the U.K. in switching to a wholly electric fleet in the future (Norway by 2025, the latter two by 2040). China is aiming that by 2025, at least a fifth of total vehicle sales will come from electric battery cars and plug-in hybrids.

A similar trend is unfolding in India, which is expected to overtake Germany and Japan to become the third biggest auto market by 2020. The government plans to convert at least 44% of its total auto fleet to EVs by 2030 and is offering a 31% tax subsidy to nudge things along.

Automakers are turning to EVs

Spurred on by growing signs that the combustion engine will soon not be welcome on the world’s streets, leading automakers are reconfiguring their long-term strategy to focus on EVs. Volkswagen is stepping up its shift to electric cars, and plans to invest more than €20 billion (US$24 billion) in zero-emission vehicles by 2030. The world’s largest automaker by sales said it would roll out 80 new EV models across its multi-brand group by 2025, up from a previous goal of 30, and plans to offer an electric version of each of its 300 group models by 2030 BMW, which launched the i3 electric car in 2013, said it is preparing for the mass production of electric vehicles by 2020 and pledged to have 12 purely battery-powered models on offer by 2025. 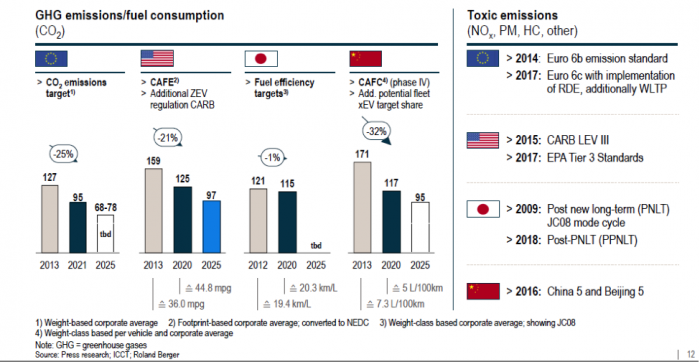 Mercedes-Benz has committed to offer at least 50 new electric or hybrid versions of its cars by 2022. Volvo has pledged to go fully electric by 2019. Jaguar Land Rover reported that all of its models will be electric by 2020. Across the Atlantic, General Motors, which released the Chevrolet Bolt, has said it will also continue pursuing electrification. Similarly, Ford has also reportedly been working on EVs development, in particular on an electric SUV.

EVs and the aluminium industry

The growth of the EV market will have positive consequences for aluminium producers. Unlike traditional vehicles, EVs have fewer components and moving parts – e-cars have around 20, compared to almost 2,000 in an ICV. Apart from current applications – such as in the vehicle’s chassis, body (body-in-white, doors, hoods and trunk lids, bumpers and crash boxes), and wheels – aluminium will be used in the structures (cases) that carry electric batteries in EVs. Those structures must provide thermal transfer capabilities to keep the battery cool or keep it warm in cold weather, all making aluminium an excellent choice.

Aluminium is also used in brake components, in order to boost the braking efficiency of EVs. The metal is an excellent heat conductor, which means brake heat created is quickly dispersed, while also offering sufficient wear-resistance. According to Lionel Chapis, managing director for automotive structures at Constellium, the weight of the battery is making the lightweighing trend even more critical: ‘’aluminium will not be an alternative for an EV, it will be mandatory’’.

For example, in order to achieve its spectacular 0-60 mph time of 2.5 seconds, the Tesla Model S’ body and chassis are built almost entirely from aluminium, bringing the total amount of aluminium used in the car to 410 lbs. (186 kg). GM’s Chevrolet Bolt, the best-selling plug-in hybrid EV in USA in July, has similar quantities. BMW, the producer of the popular i3 model, recently announced it is limiting the use of costly carbon fibre and turning to cheaper lightweight materials such as aluminium and steel (AHSS) for its best-selling electric cars to keep profit margins high. After investing between €1.5 to 2 billion to develop carbon-fibre based hybrid and electric cars, BMW is now working hard to develop “hybrid” methods, which combine carbon with aluminium and steel.

The first signs are already happening: on the 18th of September, Reuters reported that Norwegian producer Sapa (owned by Norsk Hydro) is reopening a British plant in Wales to supply aluminium components for the country’s first electric vehicle factory that will produce London black cabs. Sapa is investing £9.6m (€10.9 m) and secured £555,000 (€ 630,000) from the Welsh government for its plant in Bedwas, south Wales. It will initially hire 58 people to work in the factory and plans to create more than 200 jobs over the next five years.

Aluminium demand in EVs will be compounded by growing demand in ICVs in general. CRU expects aluminium demand for cars in Europe to grow 12% CAGR between 2016-2021, while growth in North America will be even higher, 19% CAGR over the period.

According to Ducker Worldwide, automakers will continue to increase the adoption of high-strength, low weight aluminium in new car and truck construction at a faster pace than at any time in history. Total aluminium content is expected to grow from 397 pounds (180 kg) per vehicle (PPV) in 2016 to 565 pounds (256 kg) PPV by 2028, representing 16% of total vehicle weight. Moreover, aluminium will contribute to more than 50 % of total vehicle mass reduction.

One can expect this trend to continue well into the future: not only will aluminium processing plants reopen, but new facilities will have to be built (or expanded) specifically targeted at producing the aluminium parts and batteries that EVs rely on. The shift towards EVs seems now unstoppable.