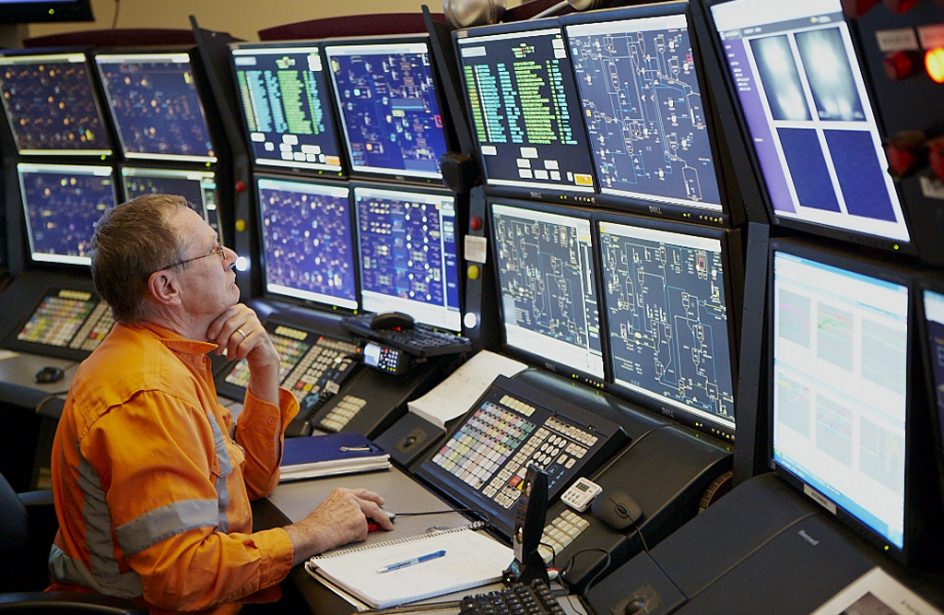 Reports that Rio Tinto agreed to sell the Dunkerque plant, the largest aluminium smelter in Europe, located in northern France, confirms the London-based company’s willingness to offload parts of its aluminium business. The deal was agreed with Liberty House, an industrial arm of British billionaire industrialist Sanjeev Gupta. Rio Tinto said in a statement that the offer was worth US$ 500 million “subject to final adjustments”, and that it expects to complete the sale by the second quarter of 2018.  The move comes on the back of Rio’s December 2016 move to sell off the smaller Scottish Lochlaber smelter, which was snapped up by Liberty House as well. But is this the right moment to sell aluminium smelters, and could Rio Tinto be wrong – once again after its misguided acquisition of Alcan in 2007 – in its strategy and decisions? 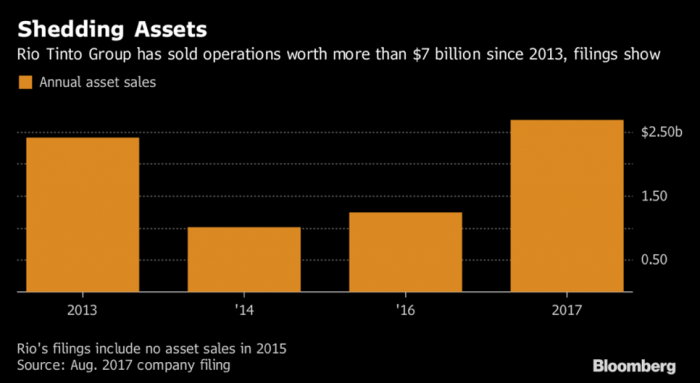 Liberty House executive Jay Hambro told Reuters recently that the group would invest €2 billion (US$ 2.4 bln) in the modernisation and upgrading of the Dunkerque smelter, with plans to build an auto components factory to process the aluminium. Rio Tinto’s chief executive Jean-Sébastien Jacques defended the move and pledged to continue selling non-core assets saying: “what is important for us is not to be the largest company, it is to be the most profitable company.”

Moreover, Liberty House is also interested in buying Rio Tinto’s Australian aluminium smelters arm, known as Pacific Aluminium. This unit originated in 2011, when the company floated the idea of selling it off, a prospect abandoned in 2013. In addition to a coal power station, Pacific Aluminium’s assets consist of three smelters in Australia and another smelter in New Zealand. The company employs over 2,000 workers and posted a first-half total net income of US$ 92 million, an increase year-on-year from last year’s first-half total of US$ 29 million. 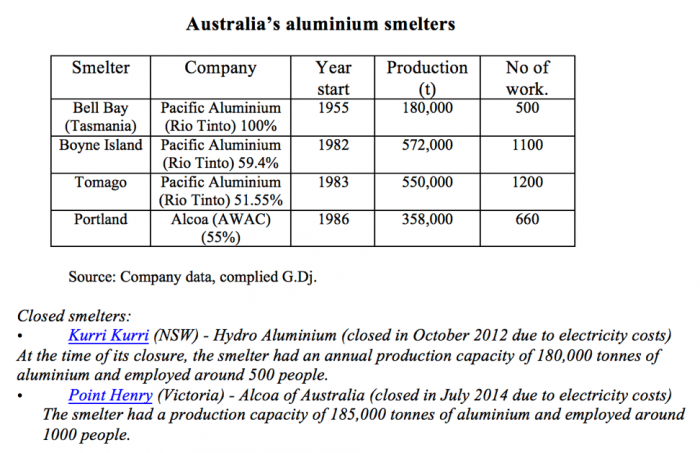 Indeed, Rio Tinto has been considering the sale of non-hydroelectric-powered aluminium assets, in Australia and Europe, while the core Canadian assets, whose electricity costs are in the bottom quartile (or even decile) of the cost curve, will be bolstered.

But perhaps a more compelling explanation for Rio Tinto’s selling spree can be traced back to its misguided acquisition of Alcan, in the days before the global recession.

When Rio Tinto bought Alcan in 2007 for around US$ 38 billion, expectations were that growing demand in China will keep prices elevated for the foreseeable future. At the time, Credit Suisse commented: “Aluminium has been the worst-performing base metal in the last five years, but its prospects appear to be improving as supply growth from both People’s Republic of China and Russia appears to be more muted than first anticipated.” But this was before the world economic crises brought the markets crashing down in the second half of 2008. 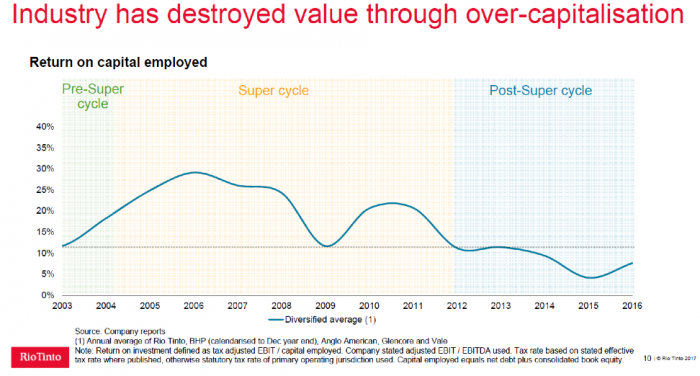 Alcan, which at the time was the second largest aluminium company in the world, was the result of successive mergers: it had bought the French producer Pechiney in 2003 (which by itself was the symbol of the global aluminium industry due to its famous smelting technology), and before that the Switzerland-based Alusuisse-Lonza (Alugroup) in 2000. But instead of going for the crown, Alcan’s strategiests seemed to have lost heart and decided instead to OK the merger with Rio Tinto.

The latter’s courage is explained by espousing a slightly different business ethos: whereas Alcan focused on lowering production costs and increasing efficiency in conditions of crisis, Rio also  split its business units. If one commodity craters, the London-based company can take it a step and sell the underperforming part, and still remains a strong company with its remaining businesses units (iron ore, coal, copper).

With that safety net in mind, Rio Tinto’s strategists were more self-confident. At the time, the company expected China’s demand for aluminium to grow by 15% per year over the following five years. Powered by China and India’s accelerated pace of development, the rise in construction projects (power infrastructure and transportation) that would inevitably result in higher metal prices (aluminium, copper), Rio had hoped to reap huge profits in decades ahead. Snapping up Alcan seemed therefore like a rational decision to make.

What set the two metals apart was that China increased imports of copper and exports of aluminium. Thus, while the strong demand for aluminium in China occurred as it was expected (11-12% annual growth), it was compensated by even higher supply growth – a trend that has since endured, albeit at slower rates.

But for a plethora of reasons, that boom-bubble-bust trend might not repeat itself this time around with aluminium prices. For one thing, Beijing’s air pollution-induced production cuts this winter will most likely send the Chinese market into deficit for the first time this century – if not this year, then in the next 2 or 3. 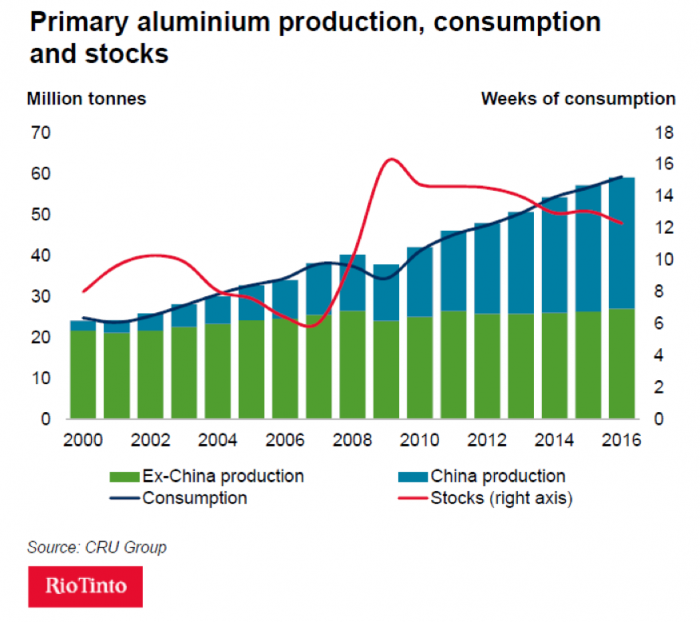 Were that to happen, and with an ongoing deficit in the ex-China market, the road would be open for the aluminium price to reach new levels, possibly growing to over 3 even 4 thousand US$ /tonne. Prices expected by some analysts ten years ago may easily become reality in next several by 2020. The relentless expansion of electric vehicles, aluminium beverage cans in China and India, investments in infrastructure etc., will all make sure that aluminium demand stays strong in over the foreseeable future.

Even if the price will not stay at elevated levels, as capacity restarts and expansions in both China and the rest of the world happen, it’s highly likely that prices will stabilize at a higher level than it is currently traded.

Rio’s short end of the stick

This is why Rio Tinto’s enduring unlucky streak could continue. Shortly after it took over Alcan, demand slowed, the market got oversupplied and prices fell sharply. This time, however, soon after Rio sells part or even its whole ex-Canada aluminium segment, the market could turn to deficit and the price could grow dramatically.

As the author of this article wrote in the September 2007 issue of Aluminium Times, commenting on Rio’s acquisition of Alcan:

The new Rio Tinto, which has already diversified into many areas and business activities, will have to change its strategy towards the aluminium business. If the opposite occurs, the writer would expect the merger to lead to stagnation and a loss of momentum within the company’s aluminium division. Then, as soon as the price of aluminium falls below its historic average, the new giant mining company, be it Rio Tinto-Alcan, or possibly BHP-Alcoa, will commence to spin off parts of its aluminium business. From such companies, a new Pechiney, Alcan or Alcoa could arise – enabling the wheel of history to continue turning.

This is exactly what happened. It remains to be seen whether the above predictions will come true this time around as well.