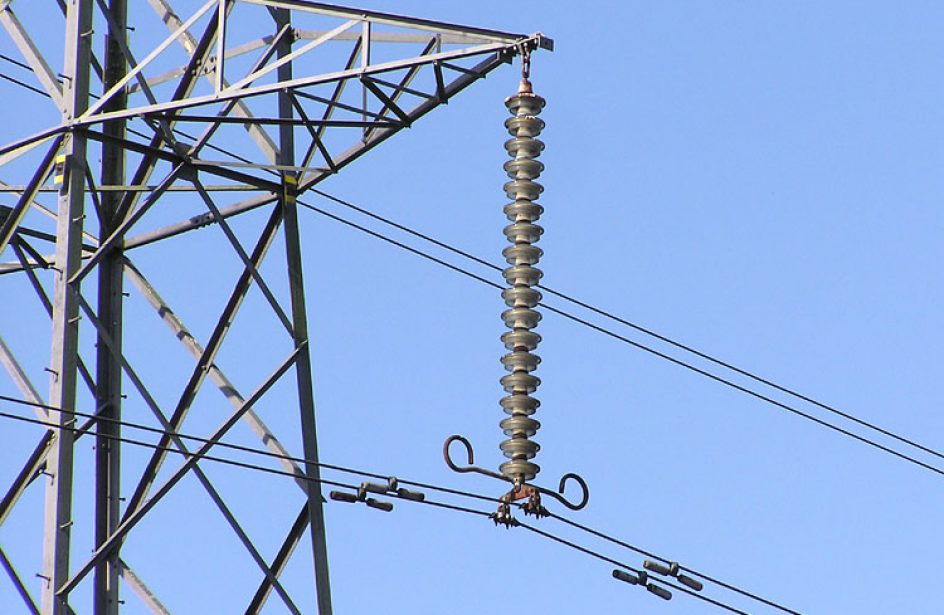 At the beginning of this century, prices for copper and aluminium were relatively similar and each metal had a dominant area of application: copper could be found in cables and wires (now approximately 60%) and aluminium in construction and transport (51%). However, in 2005, aluminium started to replace copper more intensively, and by 2007, price differences between the two metals became significant: rising from 1.2 in 2002 to 3.5 by end of 2007. The highest net loss of copper demand was due to its substitution by aluminium and other materials back in 2007, when the net reduction of copper use reached 530,000 tonnes, according to Wood Mackenzie. For the period between 2005-2009, the total amount of copper substituted reached 1.86 million tonnes. It seems that the price differential of 3 and over (Cu vs. Al) triggered the mass substitution of copper with aluminium.

In 2007, the copper price averaged US$7,126/tonne, compared to the average price of aluminium, at US$ 2,639/tonne. By the end of 2008 and throughout 2009, the prices for both metals decreased sharply due to the economic crisis, resulting in a lower overall level of substitution. Moreover, the rate of substitution declined post-2007, as most easy-to-accomplish applications had already been converted.

The prices continued to grow from 2010 onwards, reaching a 4.5 copper vs. aluminium price ratio in 2014. By the end of 2015, both prices fell again, but this ratio has been decreased to 3 or lower in September 2016. The relatively low ratio in 2016 signals that the pace of substitution has slowed.

According to estimates by the International Copper Association and Deutsche Bank, between 2004 and 2011, approximately 3 million tonnes of annual copper demand shifted to substitutes, including plastics, fibre optic and aluminium. In early 2015, when the price differential was still near record highs, London based CRU estimated that copper was losing about 2% demand a year, or approximately 500,000 tonnes. About half of this loss is due to substitution for aluminium, with the light metal gaining ground in thermal conductivity applications.

All in all, during the period of 2004-2015, some 5 million tonnes of copper was replaced, about 22% of current global copper demand. 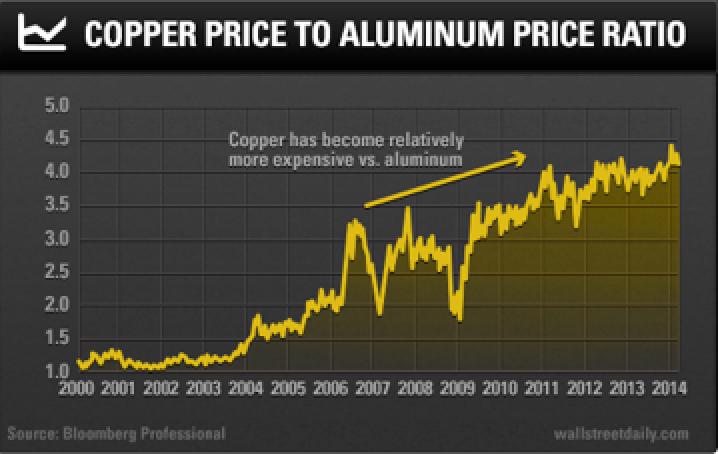 At the beginning of this century, the general view among investors was that aluminium would be the metal of the 21St century. The outlook back then was pretty much as euphoric as it is today when it comes to the use of aluminium in the automobile industry and partly in the aerospace industry. Another reason for the optimism was the ongoing and rapid urbanisation of China, creating high expectations that the country would consume all the surplus aluminium produced worldwide. That is probably the main reason why investments in primary aluminium production have been enormous and prompt, resulting in a significant surplus on the world markets.

For copper, demand and price growth during the last decade arose from the rapid urban growth and electrification in China. And in comparison to aluminium, China is currently importing over 4 million tonnes of refined copper and copper products annually (a figure which is said to grow in the future), while at the same time it exports over 4 million tonnes of mostly aluminium semi products, all contributing to the substantial price gap (Cu vs. Al) in previous years.

Copper has previously lost out to aluminium, when China’s State Grid adopted the lighter and cheaper aluminium for its long-distance transmission grid, for example. However, that shift happened several years ago when the economy was booming, and there was strong demand for air conditioners, household appliances and electronics buoyed copper prices.

Some main characteristics and advantages

The difference in the weight to electrical capacity ratio is 1:1.85, meaning one kilo (or pound) of Al has an electrical conductivity equal to 1.85 kilos of Cu. By reducing weight, it may also be possible to reduce shipping or labour costs. 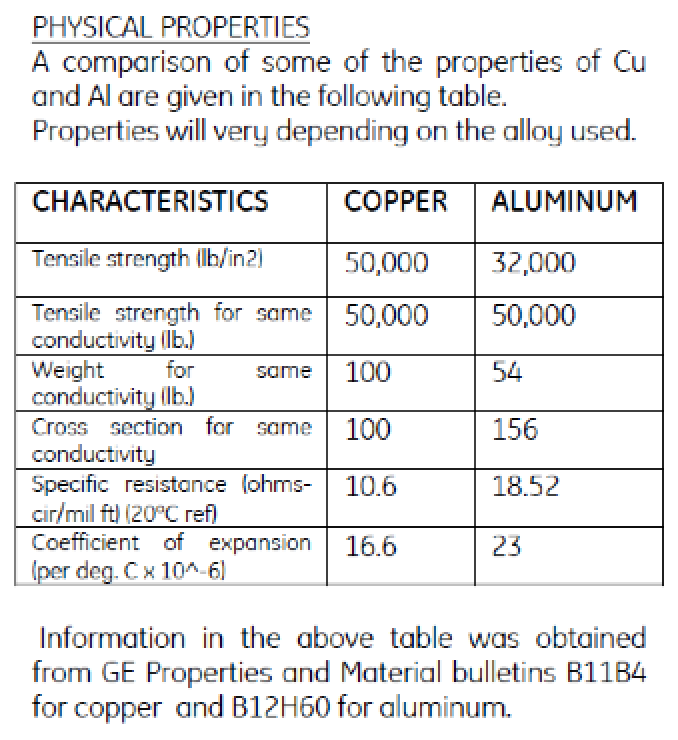 For aluminium to achieve the same electrical conductivity as copper it would require a larger cable diameter, thus needing more space and possibly increasing costs. The aluminium conductor will have a cross sectional area 56% larger than copper for the same current carrying capability. This may often be impractical in buildings and houses but not in areas where space is less of an issue. In wires and cables, aluminium can be over 50% lighter than copper.

Applications where Al has had the most success in replacing Cu are overhead transmission lines, especially in large projects in China, which result in significant weight reduction and cost saving by using Al. The reduced weight of Al cables mean fewer support towers, as well as other additional costs saving. This trend is expected to continue leading to most of the world using Al for high voltage overhead transmission lines. In buildings, for underground applications and other applications limited by space, Cu still holds the dominant position (Al cables have larger a diameter). 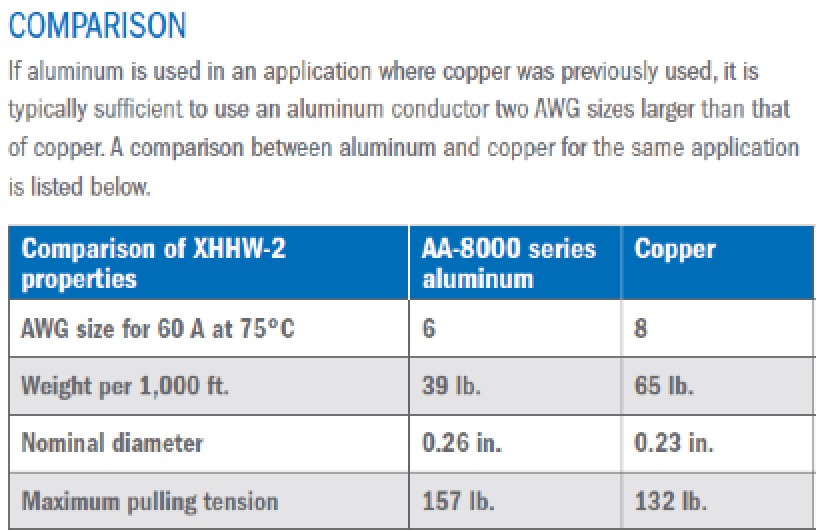 According to Fastmarkets’ Tom Jennemann, who attended July’s Aluminium Wire and Cable conference held in Detroit, aluminium cables were significantly cheaper than copper equivalents. For example, Southwire’s XHHW-2, a 600-volt cable with a copper conductor, costs about US$ 2,535 per 1,000 feet. The company’s aluminium alloy AA-8176 cable costs just US$ 900 for the same length, a saving of 65%.

Some main obstacles to increased substitution trends are related to the necessary redesign of certain parts to accommodate different technical qualities, retooling of machinery and retraining of staff in the merits of new materials. In general, a significant cost saving must be proven and the saving also needs to be large enough to cover the costs of the switchover. Moreover, there must be sufficient confidence that the saving on costs factor will be maintained in future.

Recently, a combination Cu-Al cable has appeared as a compromise solution and is being used at the Dietlikon power utility in Switzerland as an underground cable in low-voltage distribution networks. In this new cable, the phase conductors have the same cross-section as the neutral conductor, which helps to achieve a symmetrical cable structure. The phase conductors are made of aluminium, while the same-diameter neutral conductor is made of copper, enabling it to carry a greater current.

The area that faces the largest threat from substitution in the future is the commercial tube and heat exchanger material. Most automotive air conditioning and refrigeration (ACR) tubes are already made from aluminium, due to moves to reduce the weight of vehicles in a bid to make them more fuel efficient.

The average copper price for August 2016 (LME cash) was US$ 4758.2 /tonne, while the average aluminium price was US$ 1641.5 /tonne. The ratio was 2.9. The substitution of copper by aluminium and other materials during the last decade has been substantial and has definitely had influence on lower copper prices recently and subsequently the Cu-Al price ratio, despite high demand and imports from China.

Though the substitution of copper continues, due not only to higher prices but technology advancements, it will move a much slower pace in the future compared to the previous decade. Aluminium has been and will remain the main rival in this process.