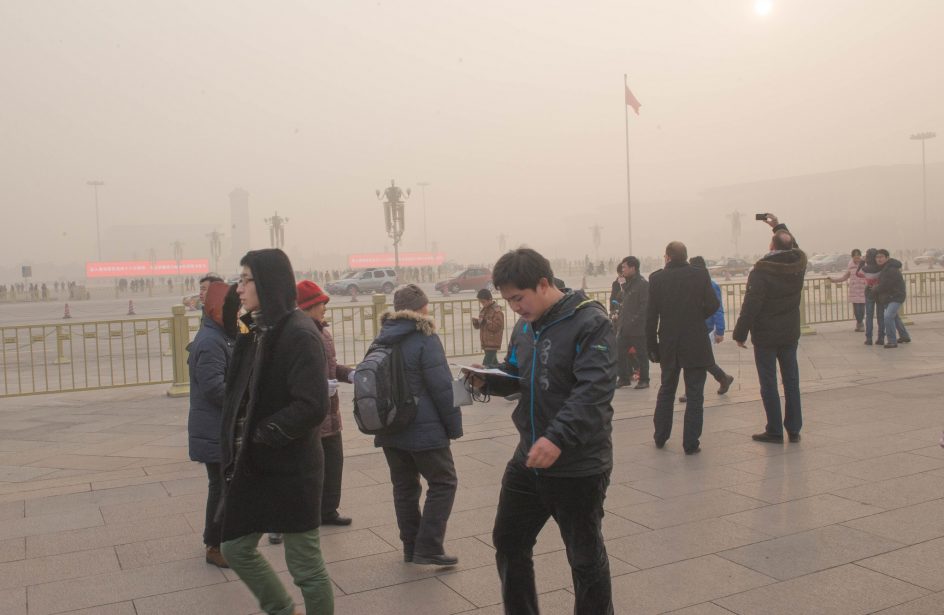 A recent proposal by China’s government to halt some coal and metals production facilities to fight air pollution over the winter could affect alumina refineries and would create shortages of alumina, if implemented, but would have a limited impact on aluminium supply. This could be concluded from the latest information coming from China after The Ministry of Environmental Protection (MEP) distributed the draft to relevant local governments and companies, seeking reaction. The impact on aluminium production would likely be limited to about 1 million tonnes (Mt), the deputy chairman of the China Nonferrous Metals Industry Association, Wen Xianjun said. The plan suggests shuttering capacities during the four months when coal-powered central heating is used in northern China. The proposal involves the suspension of alumina production in three provinces, that would affect about 50 % of running capacity, in Henan, Shandong and Shanxi provinces, operations which account for about 28 Mt of the annual production, or 40 % of the nation’s total.

China’s northeast has battled growing pollution as emissions from metal industry, coal burning in winter and increased transport have left major cities blanketed in thick smog. The environmental authority proposes to cut operational aluminium capacity by 30%, alumina by 50% and carbon by 50% in two municipalities and 26 cities across the four provinces of Shandong, Shanxi, Henan and Hebei during the winter when air pollution is most severe in China, a source who had read the draft proposal told Metal Bulletin. Based on the cuts over three months, the measures would reduce China’s total annual aluminium output by 17 %, according to Reuters calculations.

However, Chinese market participants have largely downplayed the immediate implementation of the proposed measures, saying cuts will be not be carried out until the fourth quarter of 2017 and not without “serious reworking” of the plans. Many believe the proposal is too radical and the Ministry has not considered the consequences. It’s not known when the Ministry expects to decide on whether to implement the plan.

Meanwhile, aluminium prices, both on the Shanghai Futures Exchange and LME, have rebounded during January and have performed increasingly stronger this year on news of the impending aluminium curb plan. The front month aluminium contract on the SHFE peaked at 13,990 yuan (US$ 2,034) per tonne on January 26,while the LME aluminium price has reached a 20-month high at US$ 1,875/t (LME 3-month) on January 25. 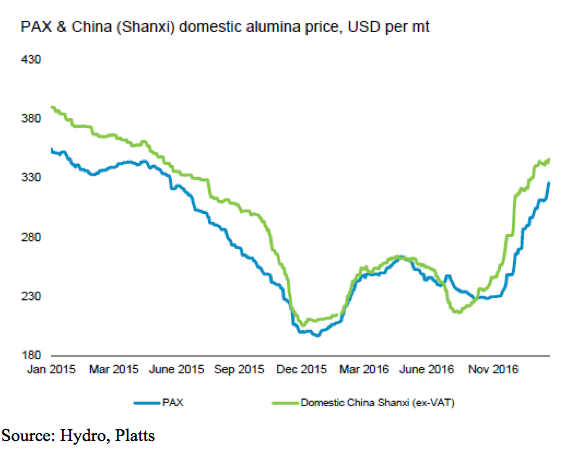 Alumina production in China in 2015, the latest for which figures are available, was 56 Mt, according to state-backed researcher Antaike. It was just under half of the world’s alumina production of 112.7mil. tones. Still, based on new capacity build and restarts, Deutsche Bank predicted a 7% increase in Chinese alumina production in 2016 to 61.5 Mt and then a further 6% growth to 65 Mt in 2017. A significant amount of refineries are currently being constructed, while many new large refineries are in the planning and approval stage.

Despite that, China will continue to import between 2.5 and 3 mil. tonnes (net imports) annually during next five years, to meet demand from smelters, according to Deutsche Bank. This would result stable and even higher global alumina prices in 2017 and beyond.

The alumina price was traded around US$ 340 per tonne in early February, while both buyers and sellers stayed on the sidelines. Traders do not expect bigger price fluctuations in following weeks (first quarter), despite lacklustre trade.

The Platts Australian alumina daily assessment slipped in the first week of February to US $336.50/mt FOB, down from US$ 339.5 /t a week ago, as the market evolved from a tight position, to being better supplied. A number of sources have said the market appeared to be under downward pressure as more tonnage have become available. However, Metal Bulletin reported on February 9 Australia alumina index at US$ 339.3 per tonne, compared to US$ 336.83 a week earlier. A business was concluded at US$340 per tonne, fob Australia, for a 35,000 tonne cargo, with prices supported by demand for prompt material and strong aluminium prices, market sources told Metal Bulletin. Enquiries have picked up for March and April cargoes, mainly from China, but also some western traders, a producer told Metal Bulletin. Two Chinese producer and trader sources told Platts they would consider US$ 339.50/mt FOB Australia a reasonable price for shipment in the second half of February. S&P Global Platts assessed the Handysize freight rate at US$ 14.25/t for moving a 30,000 tonnes shipment in the second half of February from Western Australia to Lianyungang, China.

Alumina prices have recovered in the second half of last year after reaching the record (multi-year) low in January 2016 of around US$ 200 /t. The recovery has enabled alumina refineries in China to restart. This will keep the lid on further price growth in this year and beyond. Contract alumina price is mostly traded now at around 14-15% of LME – 3-month aluminium price.

Global alumina cost curve in recent months, similar to aluminium cost curve, has been under pressure due to higher coal and caustic soda prices, and transportation costs. Most of alumina production cash costs are in the range of ~US$ 170 to ~US$ 350 per tonne.

Alumar alumina refinery in Brazil, co-owned by Alcoa, South32 and Rio Tinto, is among lowest cost producers in the world. On the other side is Ewarton refinery on Jamajka (US Rusal) or Luneng Jinbei (China Power) with C1 cash costs over US$ 300 /tonne, a graph provided by Deutsche bank shows. Hydro has a 92% stake in the low-cost Alunorte alumina refinery. With nameplate capacity of 6.3 Mt per year, Alunorte is the world’s largest alumina refinery. 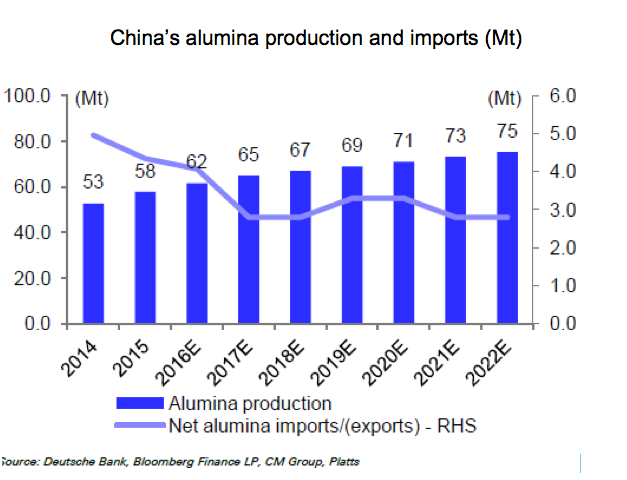 Deutsche Bank estimates that the equilibrium alumina price in China is around RMB1,900/t, (US$ 275/t) which is around the 80th percentile on the all-in cost curve and equates to a seaborne price of around US$245-250/t (without freight costs to the refinery). During the first quarter 2016 the bank estimated that over 50% of Chinese refineries were unprofitable at these prices (FOB ex Australia). When the alumina price climbed above RMB1,900/t during the first quarter of 2016, higher cost refineries began restarting. Below this level, capacity is likely to be curtailed.

The Chinese domestic cost curve has fallen in first half of 2016, with the addition of new larger, low-cost and more efficient refining capacity. Most new greenfield and brownfield refineries are integrated with smelters and power plants, thereby pushing down the Chinese cost curve further. Industry experts suggest that average all-in costs (50th percentile) have fallen below RMB 2000/t (US$ 290/t) in 2016. This includes sustaining capex, VAT and financing costs. However, rising coal and caustic soda prices in the final quarter of 2016 resulted in rising average costs to around / above RMB 2000/t.

Globally, Deutsche Bank estimates the average cost on a C1 basis (50th percentile) at around US$235/t in 2016. Several high cost refineries were curtailed in 2015 with the fall in the seaborne price including Alcoa’s Point Comfort and Suriname refineries, as well as other Atlantic basin refineries. From 2018, the bank expects the Atlantic basin alumina market to tighten on increased aluminium demand, thereby sending upwards the seaborne alumina price.

Solid demand growth for aluminium will secure stable demand for alumina and bauxite in the following years. The alumina market will be mostly balanced for at least the next five years, meaning that new and existing refining capacity will mostly meet demand from smelters and aluminium production growth, in China before all.

Based on the latest information, it is more likely that measures to cut air pollution will be implemented and will affect the production of alumina and aluminium alike in the 2017/18 winter period. Moreover, though it is not yet known how the proposed measures will affect production, it is reasonable to expect that production of alumina and aluminium will not be severely reduced, taking into account that some 4 Mt of new smelting capacity will start production in China in this year, in addition to some 0.5-1 Mt expected to be put back online.

Still, it is almost certain now that alumina and aluminium prices will be well supported for the new highs in the last two months of the year, as air pollution measures result in production cuts. Before that, smelters may work to secure some alumina supplies/reserves, while new smelting capacities may delay start up or just delay ramping up production when started. All in all, it seems the China’s air pollution policy is there to stay for the long term and will continue to loom over the market. Prices of alumina and aluminium in this year and next may surprise analysts on upper side, despite another year of record production.

Goran Djukanovic is an aluminium market analyst and consultant, based in Podgorica, Montenegro. He is a speaker at this year’s Faro Meeting in Bologna, Italy, on 6/7 April