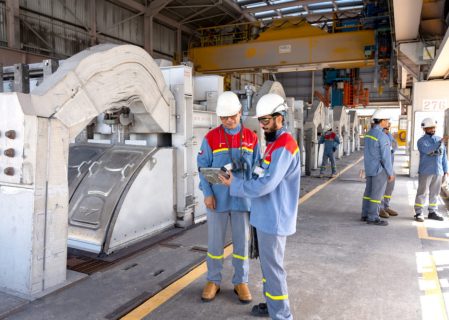 Emirates Global Aluminium PJSC (EGA) announced last week that it has started operations at its DX+ Ultra reduction cells at an amperage of 500kA, the highest amperage reached by alumininium smelters in the Middle East to date. Boosting the amperage to 500kA...

Australian Bauxite Limited (ABx) said this week that it’s subsidiary ALCORE Limited has received a grant of A$7.5 million from...

Aluminium pioneer Alcoa Corporation announced this week the completion of a new aluminium recycling furnace at its plant in Mosjøen,...

Aluminium Bahrain B.S.C. (Alba) announced last week that it has chosen to work with EtaPRO LLC to enhance the thermal performance of its various aluminium production plants. Alba will use the EtaPRO system to establish a digital dashboard that measures the plant’s performance and degradation. The digital Industry 4.0 and artificial intelligence will be used […]

Emirates Global Aluminium PJSC (EGA) has extended its agreement with state-owned mining firm Saudi Arabian Mining Company (Ma’aden) to explore and maximize opportunities in the aluminium sector. This week’s agreement tacks on to the end of a 2018 Memorandum of Understanding to coordinate on the development of aluminium smelting technology, including technology that will reduce […]

Aluminium Bahrain B.S.C. (Alba) and Emirates Global Aluminium PJSC (EGA) have signed a Memorandum of Understanding on technology cooperation between the two firms this week. Details of the MoU were sparse, but the document evidently contemplates to find ways for the two companies to work towards increasing production at Alba’s Line 6 smelter and to […]

Norway aluminium producer Norsk Hydro ASA announced this week NOK60 million (US$6.6 million) in improvements to Årdal aluminium smelter’s electrolysis cells aimed at improving efficiency, safety, and profitability at the plant. The firm said in a press release that improvements at the plant would commence next spring and will include upgrades to the next-generation cell […]

India’s biggest aluminium producer Vedanta Ltd. debuted this week special “high-speed” aluminium billet customized for use in aluminium extrusions in an online event attended by downstream and other value-added aluminium stakeholders. Vedanta said its new line of aluminium billet is capable of increasing the speed of extruding aluminium by 25 percent. The firm utilized several […]