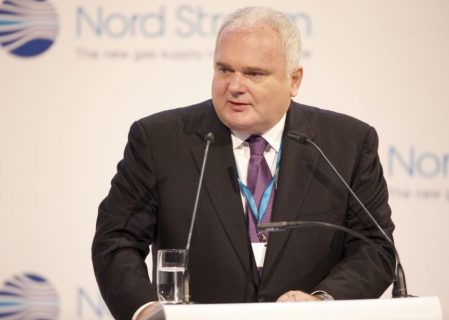 Russian Federation aluminium titan U.C. Rusal announced on Wednesday the departure of Matthias Warnig from the company’s board of directors. The now-former chairman’s resignation is part of the corporate restructuring Rusal agreed to in order to have sanctions lifted by the United...

In a bid to lend support to the sanctioned Russian Federation aluminium giant U.C. Rusal, the Russian government has plans...

The Trump administration announced on Friday another month-long extension of a reprieve from sanctions for En+ Group, Rusal, and GAZ,...

Russian Federation aluminium behemoth U.C. Rusal released results for the third quarter yesterday. Though still laboring under sanctions imposed on it by the Trump administration, Rusal posted a 55-percent jump in net profits in the just-ended quarter. In the third quarter Rusal smelted 940 thousand metric tons of primary aluminium, up by 1 percent on […]

Following through on promises made this summer to United States government regulators, U.C. Rusal’s parent company En+ Group announced on Friday that founder Oleg Deripaska has passed the company’s reins to a successor. In a brief press release issued on Friday, the company said that the move was made as part of a larger initiative, […]

Struggling Russian Federation aluminium giant U.C. Rusal received a temporary reprieve from the United States Treasury Department late last week in the form of an extension of the deadline for ending third-party transactions. According to a press release issued by the Treasury Department, the new deadline for customers to end commercial transactions with Rusal is […]

Rusal To Establish Trading Team In Beijing To Carry On Aluminium, Alumina Business In China: Sources

With the other shoe to drop in just under a month in the form of a deadline for third parties to end business relations with the firm, Russian Federation aluminium titan U.C. Rusal is hurriedly establishing a team of traders in the People’s Republic of China to carry on business there. So said a trio […]