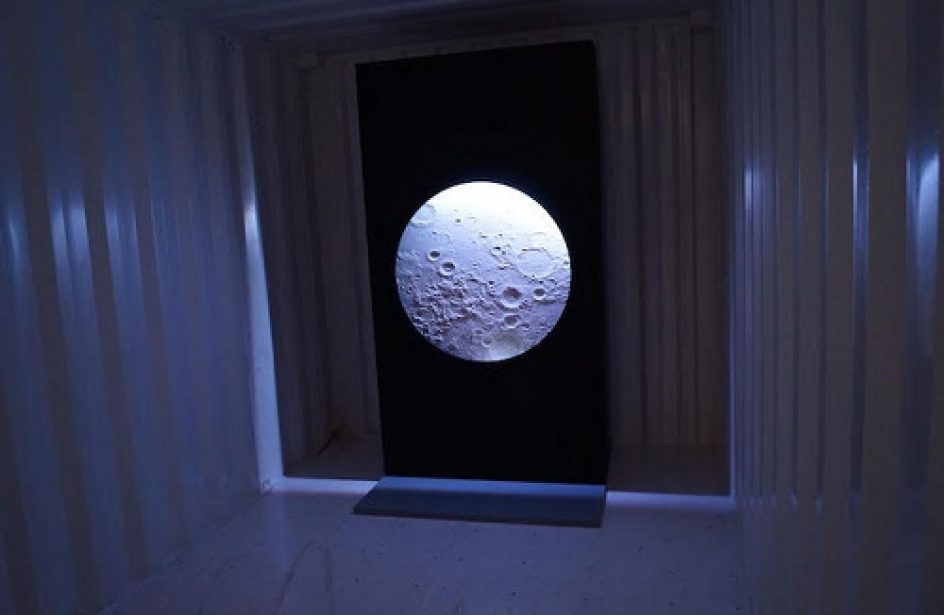 A Moon With Many Stars. Source: Craig Dorety

A creation by an Oakland, California artist has attempted to capture the peaks, craters, crags, and draws of Earth’s moon using aluminium as a medium. On display now at Art Market San Francisco, Craig Dorety’s piece, entitled A Moon With Many Stars, is a study of reflection, color, and perception, all using the reflective properties of aluminium to mimic our 4.5-billion-year-old planetary companion.

“The moon doesn’t emit its own light. It is a reflective body,” Dorety explains. “I shine lights onto a surface and the viewer is presented with reflected light or indirect light. This technique allows for richer colors in perception, doesn’t overwhelm the eye, and lets me introduce shadow (the only way to get black or gray when working with light).”

Lighting the painstaking reproduction of our only natural satellites pock-marked surface is an array of light-emitting diodes (LED) placed around the sculpture as it hangs at the end of an empty shipping container. The artist, who is also an engineer, designed all the components on his own machinery, and hand-soldered each LED in place.

Although the piece is a work of art, Dorety took no liberties on the topography. The sculpture’s features were created using data collected by a NASA probe.

“From there, I can generate tool-paths (or machine cutting instructions) using computer-aided manufacturing software,” he elaborates. “Then I load these instruction into the machine controller and hit the ‘GO’ button.”

The piece on display is the latest of a few different attempts to make a convincing piece, some using wood. That one was paid for with a grant, but Dorety’s passion for the project led him to fund this version out of his own pocket.

“It was something I have been wanting to make for a few years, but didn’t have the time,” he explains. “I wrote an application for its display at Art Market. They accepted, so I scrambled to create it in time.”