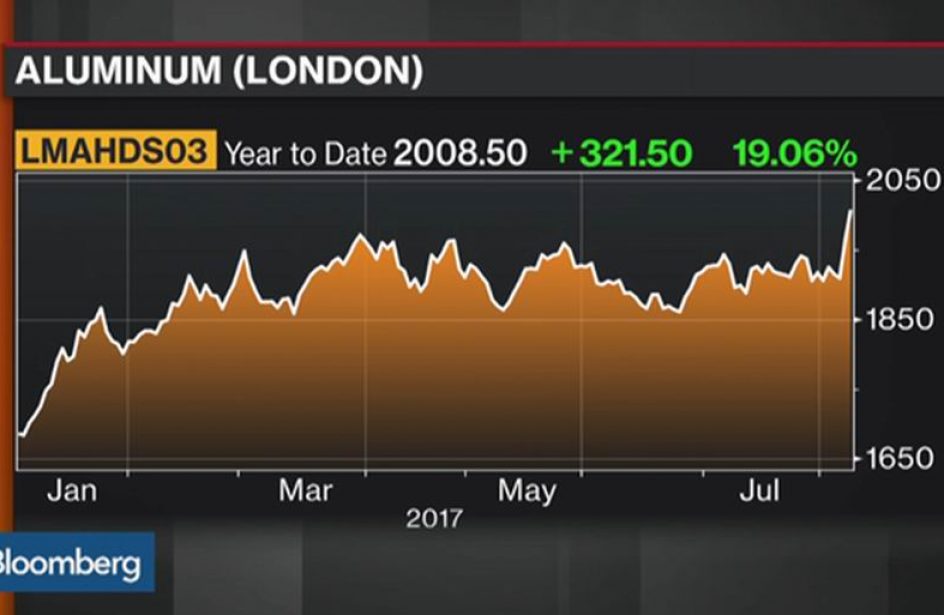 Even if it was obvious that aluminium prices will rise in the second half of the year, there were no signs that this would occur in August. The month started with aluminium on the backfoot, as prices shortly dipped below US$ 1890/t, before breaching the US$ 2000/t mark for the first time since December 2014. The second week of August ended with the metal at US$ 2040/t, a gain of around 20 % since the start of the year the biggest rally among 22 raw materials on the Bloomberg Commodity Index.

The reason for such sudden increase was news that authorities in China’s top aluminium producing province of Shandong ordered 3.21 million tonnes of illegal smelting capacity to be shut down by the end of July, which greatly outperformed both industry and analysts’ expectations. The Shandong Development and Reform Commission (SDRC) ordered China Hongqiao Group Ltd (the world’s largest Al producer) to close 2.68 million tonnes per annum of capacity by the end of July, and Xinfa Group was to close 530 thousand tonnes per annum. China Hongqiao has earlier announced closure of around 2 million tonnes of out-dated capacity but also said that it will replace it, ensuring that total production for this year remains about the same as last year, at 6.5-7 million tonnes.

The Shandong province, in a bid to keep emissions under control this year, announced it would restrict on November 15th the aggregate output of its alumina and aluminium producers who have met emissions standards by 30%, while those who fall short of these standards would be told to suspend operations. Looking ahead, the sheer amount of pollution emitted by the Chinese industry means that its industry will no be able to grow without further controls and without licences, while those who have work licences but pollute the air will pass through annual cycles of production.

A weaker US dollar has lent additional support to metals in the current situation. The Bloomberg Dollar Index was down 8 % for the first seven months of the year, on track to record the biggest annual loss since the gauge started in 2004. The global aluminium market may flip to a significant deficit, according to the Wood Mackenzie Ltd. The production cut of 3.2 million tonnes a year, or 3 million tonnes at current operating rates, represents 9 % of China’s total production for 2017.”The trend is definitely towards a much tighter market balance – there is an upshot to prices here definitely,” said London-based Wood Mackenzie analyst Ami Shivkar.

However, some are more sceptical: bearish analysts had first claimed that China will not seriously cut production and that in an oversupplied market prices won’t budge by a significant margin. Now, they argue that the price rally will not last long. Bears are betting that booming prices will encourage some plants to restart, while new capacity that has been closed by regulators will be allowed to reopen after winter.

However, it should be noted that from mid-2014, LME registered aluminium stocks have constantly fallen in spite of growing production volumes in China (albeit with a temporary sharp drop at the beginning of 2016). For the past few years, Beijing’s exports have been stable at over 4 million tonnes per year, mostly semi-products.

What this means is that global stocks are gradually depleting, and, in current market conditions (production disruption and growing demand), it won’t be long before global markets experience not only a production deficit but also a supply and stock deficit. 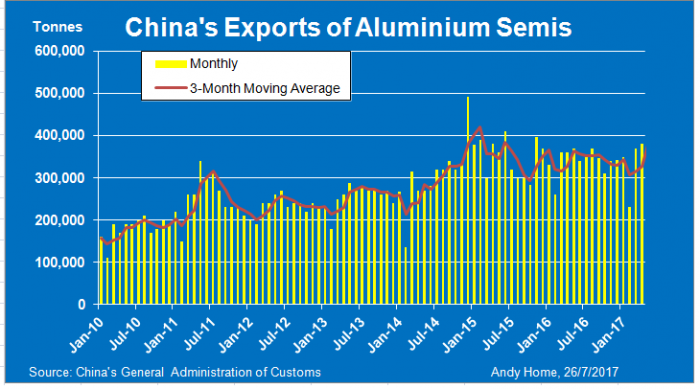 China’s aluminium output fell 8.2 % in July from a record high a month earlier, to 2.69 million tonnes, from 2.93 million tonnes in June, according to the National Bureau of Statistics (NBS). July’s output was down 0.3 % year-on-year, but output is still 7.5 % higher in the first seven months of 2017. However, some analysts were sceptical about the accuracy of the bureau’s numbers. 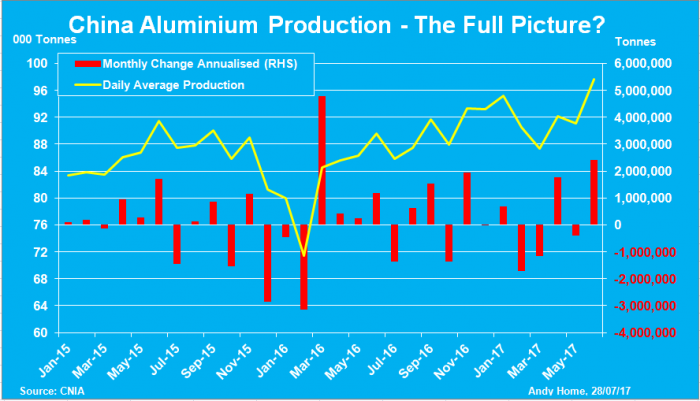 Antaike predicted China’s national refined aluminium output in 2017 to hit 36 million tonnes, up 10.3% year-on-year. The agency forecast China’s aluminium supply and demand to be in balance in 2017, with a surplus of 230,000 tonnes for the whole of this year.

Data from China Nonferrous Metals Industry Association showed power costs account for around 40% of production costs at Chinese aluminium smelters, and range from Yuan 0.20/kWh to Yuan 0.35/kWh (3 – 5.3 USc/KWh) across various production zones, with those having been given preferential rates enjoying cheaper costs.

The latest Reuters base metals poll, conducted during the first half of July and published before the latest production cuts in China and aluminium price growth, showed that the majority of analysts expect aluminium prices to average around US$ 1900/tonne and above in 2017 and 2018. Thus the mean (average) forecast price by 29 analysts for 2017 was US$ 1891 / tonne, the lowest US$ 1786 /tonne, while the highest US$ 1955/tonne. As for 2018 the average forecast price is US$ 1896/tonne, the lowest US$ 1675.5/tonne and the highest US$ 2175/tonne, pointing to wide divisions in analysts’ views.

While in the previous poll analysts slashed their estimates of a surplus by 74 %, they have now increased them by 52 % – to 125,000 tonnes. They have also cut an expected deficit next year by more than half to 87,000 tonnes from 200,000 in the previous poll. “We would expect some old capacity to be shut but would think implementing all suspensions in the near term would be difficult to achieve without a more phased and gradual medium-term plan,” said Stephen Walker, head of global mining research at RBC Capital Markets.

Analysts see supply issues largely factored into the price, with the LME cash price expected to average US$ 1918 /tonne in the fourth quarter.

It seems China is quite serious this time in its fight against air pollution and environmental inspections, and production curtailments will continue in the following months, at least until air quality significantly improves. China is also dead set on bringing order to the aluminium industry and eliminate unlicensed production capacity. It would not be an exaggeration to claim that the cuts will revolutionise China’s industry this winter, compared to the way it worked like in the past.

Still, the big question is: what comes next? What will happen after the winter months, and the March 15 deadline. It’s realistic to expect that aluminium, steel, cement etc. producers will try to compensate for four months of cuts with increased production in the rest of the year. And the final result may be that the timeframe for emissions and smog will simply shift.

China’s industrial production, profits, employment and overall economy will weaken during the four month winter period, which together with rising production in the second and third quarter of 2018 will inevitably result in market surpluses and the fall of aluminium and other metal prices.

As a result, this moment is especially important for aluminium producers to plan production and protect sales prices for the next year, by selling in advance at a fixed price or by hedging procedures. A smart move taken at the right time would spare producers from LME price fluctuations and risks associated with potential lower prices in 2018. Who succeeds to sell most of their production for the next year at favourable prices will undoubtedly be the winner. The only unknown variable? Deciding when to sell.