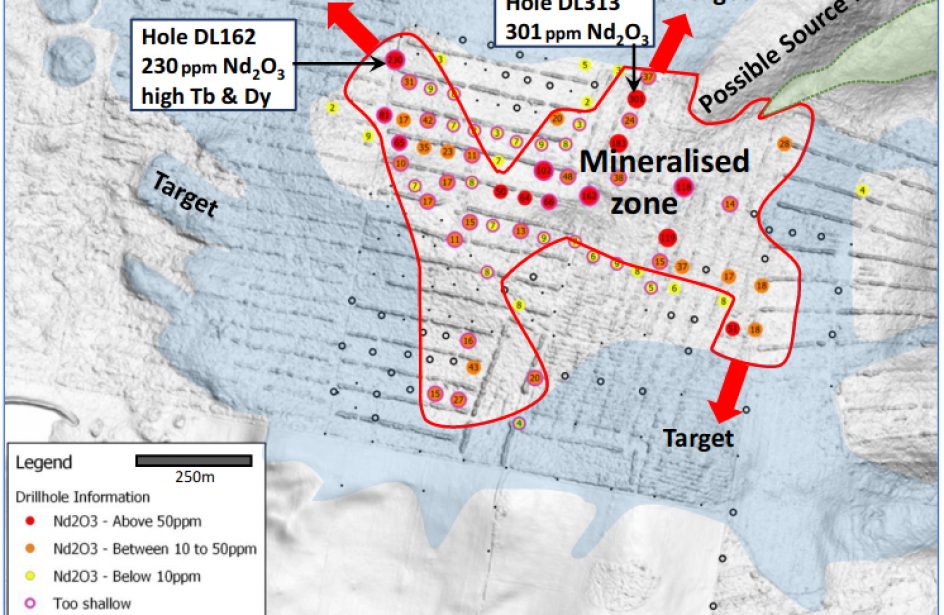 REE discovery at the DL130 project area. The mineralised zone has been bulk-sampled for process testwork at ABx’s Tasmanian research laboratory and assaying at commercial laboratories, Source: Australian Bauxite

According to ABx, the test results show that the REE at the site are significantly enriched, while the deleterious elements are strongly depleted. Radioactive elements are low grade, and test results of the samples show that leaching with a sulfate solution may increase leach recovery of REE into the water fraction.

The upshot of the testing is that the highly-lucrative super-magnetic rare earth elements Neodymium, Praseodymium, Terbium and Dysprosium can be found in abundance at the site, and are easily recoverable. Such elements command a high price from builders of electric vehicles, wind turbines, smart phones, and military electronics.

“This research work will continue to provide a better understanding of the potential of our rare earth element mineralisation,” said ABx Operations Manager Nathan Towns in a press release.

“The current results support our interpretations that the REE occurs as ionic substances that are loosely bound to clays and are therefore relatively easy to leach and precipitate a concentrate that is saleable. The mineralisation appears to be Ionic Adsorption Clay deposits (“IAC”) which have been a major source of low-cost REE production in southern China until recently.”

“We are conducting further metallurgical tests on bulk samples to confirm the deposit type and continue assembling results to design a low-cost concentration method for our REE type of mineralisation,” he concluded.

“Prices for the four super-magnet REE are still rising strongly,” said ABx CEO, Ian Levy. “ABx is targeting the IAC type of REE mineralisation that can be developed fastest so as to give ABx shareholders an opportunity to capture some of the value from this bull market situation.”